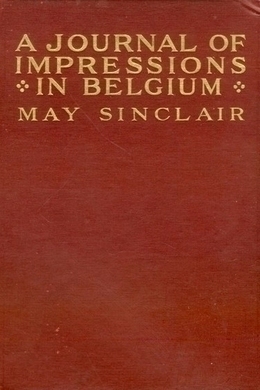 A Journal of Impressions in Belgium

A Journal of Impressions in Belgium, a fictionalised record of Sinclair’s experiences and one of the first wartime women’s diaries published in Britain. The journal describes in minute detail the few days she spent with the corps, ferrying wounded men between Ghent and Ostend before the Fall of Antwerp. The tone is overwhelmingly one of inadequacy and regret – Sinclair is acutely aware of her unlikely and, ultimately, unhelpful presence at the front line – yet this tension is what lends the text its significance.

After the painful births and deaths of I don’t know how many committees, after six weeks’ struggling with something we imagined to be Red Tape, which proved to be the combined egoism of several persons all desperately anxious to “get to the Front,” and desperately afraid of somebody else getting there too, and getting there first, we are actually off. Impossible to describe the mysterious processes by which we managed it. I think the War Office kicked us out twice, and the Admiralty once, though what we were doing with the Admiralty I don’t to this day understand. The British Red Cross kicked us steadily all the time, on general principles; the American snubbed us rather badly; what the French said to us I don’t remember, and I can’t think that we carried persistency so far as to apply to the Russian and the Japanese. Many of our scheme perished in their own vagueness. Others, vivid and adventurous, were checked by the first encounter with the crass reality. At one time, I remember, we were to have sent out a detachment of stalwart Amazons in khaki breeches who were to dash out on to the battle-field, reconnoitre, and pick up the wounded and carry them away slung over their saddles. The only difficulty was to get the horses. But the author of the scheme–who had bought her breeches–had allowed for that. The horses were to be caught on the battle-field; as the wounded and dead dropped from their saddles the Amazons were to leap into them and ride off. On this system “remounts” were also to be supplied. Whenever a horse was shot dead under its rider, an Amazon was to dash up with another whose rider had been shot dead. It was all perfectly simple and only needed a little “organization.” For four weeks the lure of the battle-field kept our volunteers dancing round the War Office and the Red Cross Societies, and for four weeks their progress to the Front was frustrated by Lord Kitchener. Some dropped off disheartened, but others came on, and a regenerated committee dealt with them. Finally the thing crystallized into a Motor Ambulance Corps. An awful sanity came over the committee, chastened by its sufferings, and the volunteers, under pressure, definitely renounced the battle-field. Then somebody said, “Let’s help the Belgian refugees.” From that moment our course was clear. Everybody was perfectly willing that we should help the refugees, provided we relinquished all claim on the wounded. The Belgian Legation was enchanted. It gave passports to a small private commission of inquiry under our Commandant to go out to Belgium and send in a report. At Ostend the commission of inquiry whittled itself down to the one energetic person who had taken it out. And before we knew where we were our Ambulance Corps was accepted by the Belgian Red Cross.

Only we had not got the ambulances.

And though we had got some money, we had not got enough. This was really our good luck, for it saved us from buying the wrong kind of motor ambulance car. But at first the blow staggered us. Then, by some abrupt, incalculable turn of destiny, the British Red Cross, which had kicked us so persistently, came to our help and gave us all the ambulances we wanted.

And we are off.

There are thirteen of us: The Commandant, and Dr. Haynes and Dr. Bird under him; and Mrs. Torrence, a trained nurse and midwife, who can drive a motor car through anything, and take it to bits and put it together again; Janet McNeil, also an expert motorist, and Ursula Dearmer and Mrs. Lambert, Red Cross emergency nurses; Mr. Grierson, Mr. Foster and Mr. Riley, stretcher-bearers, and two chauffeurs and me. I don’t know where I come in. But they’ve called me the Secretary and Reporter, which sounds very fine, and I am to keep the accounts (Heaven help them!) and write the Commandant’s reports, and toss off articles for the daily papers, to make a little money for the Corps. We’ve got some already, raised by the Commandant’s Report and Appeal that we published in the Daily Telegraph and Daily Chronicle. I shall never forget how I sprinted down Fleet Street to get it in in time, four days before we started.

And we have landed at Ostend.

I’ll confess now that I dreaded Ostend more than anything. We had been told that there were horrors upon horrors in Ostend. Children were being born in the streets, and the state of the bathing-machines where the refugees lived was unspeakable. I imagined the streets of Ostend crowded with refugee women bearing children, and the Digue covered with the horrific bathing-machines. On the other hand, Ostend was said to be the safest spot in Europe. No Germans there. No Zeppelins. No bombs.