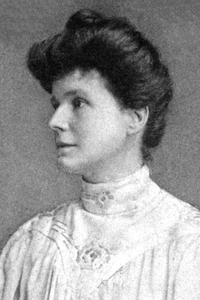 May Sinclair was the pseudonym of Mary Amelia St. Clair, a popular British writer who wrote about two dozen novels, short stories and poetry. She was an active suffragist, and member of the Woman Writers’ Suffrage League. Sinclair was also a significant critic, in the area of modernist poetry and prose and she is attributed with first using the term stream of consciousness) in a literary context, when reviewing the first volumes of Dorothy Richardson’s novel sequence Pilgrimage, in The Egoist, April 1918. Sinclair wrote two volumes of supernatural fiction, Uncanny Stories and The Intercessor and Other Stories. Gary Crawford has stated Sinclair’s contribution to the supernatural fiction genre, “small as it is, is notable”. Jacques Barzun included mer among a list of supernatural fiction writers that “one should make a point of seeking out”, and Brian Stableford stated that her “supernatural tales are written with uncommon delicacy and precision, and they are among the most effective examples of their fugitive kind.”

A Journal of Impressions in Belgium (1915)

A Journal of Impressions in Belgium, a fictionalised record of Sinclair’s experiences and one of the first wartime women’s diaries published in Britain....read more »

The Romantic tells the story of Charlotte Redhead, a woman who, as the novel opens, has just been dropped by the married man with whom she was sexually ...read more »

The Tree of Heaven draws upon Sinclair’s experiences in the First World War. Concerned with the Harrisoon family, it follows the three children, Michael...read more »