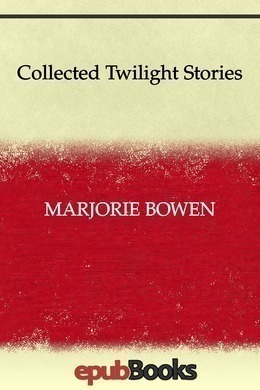 Collected Twilight Stories is a compilation of sixteen of Marjorie Bowen’s supernatural horror stories. “She is a painstaking researcher, a superb writer, a careful technician, and a master of horror. There is no one else quite like her. Contents: Scoured Silk; The Breakdown; One Remained Behind - A Romance a la Mode Gothique; The House By The Poppy Field; Half-Past Two; Elsie’s Lonely Afternoon; The Extraordinary Adventure of Mr John Proudie; Ann Mellor’s Lover; Dark Ann; Decay; Giuditta’s Wedding Night; A Stranger Knocked; They Found My Grave; Brent’s Folly; The Housekeeper (The Confession of Beau Sekforde); The Folding Doors.

This is a tale that might be told in many ways and from various points of view; it has to be gathered from here and there–a letter, a report, a diary, a casual reference; in its day the thing was more than a passing wonder, and it left a mark of abiding horror on the neighborhood.

The house in which Mr. Orford lived has finally been destroyed, the mural tablet in St. Paul’s, Covent Garden, may be sought for in vain by the curious, but little remains of the old piazza where the quiet scholar passed on his daily walks, the very records of what was once so real have become blurred, almost incoherent in their pleadings with things forgotten; but this thing happened to real people, in a real London, not so long ago that the generation had not spoken with those who remembered some of the actors in this terrible drama.

It is round the person of Humphrey Orford that this tale turns, as, at the time, all the mystery and horror centered; yet until his personality was brought thus tragically into fame, he had not been an object of much interest to many; he had, perhaps, a mild reputation for eccentricity, but this was founded merely on the fact that he refused to partake of the amusements of his neighbors, and showed a dislike for much company.

But this was excused on the ground of his scholarly predilections; he was known to be translating, in a leisurely fashion, as became a gentleman, Ariosto’s great romance into English couplets, and to be writing essays on recondite subjects connected with grammar and language, which were not the less esteemed because they had never been published.

His most authentic portrait, taken in 1733 and intended for a frontispiece for the Ariosto when this should come to print, shows a slender man with reddish hair, rather severely clubbed, a brown coat, and a muslin cravat; he looks straight out of the picture, and the face is long, finely shaped, and refined, with eyebrows rather heavier than one would expect from such delicacy of feature.

When this picture was painted Mr. Orford was living near Covent Garden, close to the mansion once occupied by the famous Dr. Radcliffe, a straight-fronted, dark house of obvious gentility, with a little architrave portico over the door and a few steps leading up to it; a house with neat windows and a gloomy air, like every other residence in that street and most other streets of the same status in London.

He came from a good Suffolk family, in which county he was believed to have considerable estates (though it was a known fact that he never visited them), and he had no relations, being the only child of an only child, and his parents dead; his father had purchased this town house in the reign of King William, when the neighborhood was very fashionable, and up to it he had come, twenty years ago–nor had he left it since.

He had brought with him an ailing wife, a house-keeper, and a man-servant, and to the few families of his acquaintance near, who waited on him, he explained that he wished to give young Mrs. Orford, who was of a mopish disposition, the diversion of a few months in town.

But soon there was no longer this motive for remaining in London, for the wife, hardly seen by anyone, fell into a short illness and died–just a few weeks after her husband had brought her up from Suffolk. She was buried very simply in St. Paul’s, and the mural tablet set up with a draped urn in marble, and just her name and the date, ran thus:

Mr. Orford made no effort to leave the house; he remained, people thought, rather stunned by his loss, kept himself close in the house, and for a considerable time wore deep mourning.

But this was twenty years ago, and all had forgotten the shadowy figure of the young wife, whom so few had seen and whom no one had known anything about or been interested in, and all trace of her seemed to have passed out of the quiet, regular, and easy life of Mr. Orford, when an event that gave rise to some gossip caused the one-time existence of Flora Orford to be recalled and discussed among the curious. This event was none other than the sudden betrothal of Mr. Orford and the announcement of his almost immediate marriage.

The bride was one who had been a prattling child when the groom had first come to London: one old lady who was forever at her window watching the little humors of the street recollected and related how she had seen Flora Orford, alighting from the coach that had brought her from the country, turn to this child, who was gazing from the railing of the neighboring house, and touch her bare curls lovingly and yet with a sad gesture.