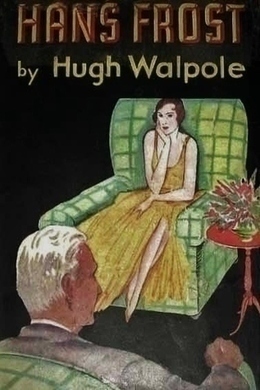 Orphaned teenager Nathalie Frost is on her way to London to stay with her mother’s sister, Aunt Ruth, and Ruth’s famous husband, the celebrated popular novelist Hans Frost. She arrives on the evening of Hans Frost’s 70th birthday celebration, and Aunt Ruth bundles Nathalie off to her bedroom to get her out of the way. Hans himself is something of a side character in the household, for despite their critical acclaim, his books don’t bring in that much income, and his wife’s wealth provides the luxury he has enjoyed since their marriage. Hans and Nathalie meet that night and are immediately taken with each other, much to Ruth’s jealous dismay. The entry of Nathalie into his world is the catalyst which Hans has needed to wake him from his slump; his next move shocks the literary and social world. Nathalie meanwhile is learning about love from a Russian emigre; her life as well is changed beyond recognition by her close relationship with her uncle and the influence they have on each others’ lives.

No one perhaps in the United Kingdom was quite so frightened as was Nathalie Swan on the third day of November, 1924, sitting in a third-class carriage about quarter to five of a cold, windy, darkening afternoon. Her train was drawing her into Paddington Station, and how she wished that she were dead!

She sat in a corner on the hard, dusty seat, her hands clenched, her heart beating with hot, thick, hammering throbs. She wished that she were dead. She was an orphan. No one in the world needed her. The Proudies whom she was abandoning had been very, very good to her, but certainly did not need her. The famous Mrs. Frost to whom she was going would almost surely not be good to her–and as to needing her …

Open upon her lap was a number of that shiny geographically illustrated paper the London News, and among other portraits was one of Hans Frost, and under it was written:

Mr. Hans Frost, whose Seventieth Birthday occurs on November 3. His friends and admirers are marking the occasion with a suitable presentation.

Kind Samuel Proudie had not known that the photograph was there, when at Polchester Station he had bought illustrated papers and flung them onto her lap. She herself had, of course, not known it, and it had been with a kind of shock that she had recognized the well-known features, the square rugged face with the deep, penetrating eyes, the round head with its short, thick, black hair, the face austere like a priest’s, the shoulders broad, the body rather squat, the short sturdy legs, standing there in the beautiful book-lined library–no man of seventy here surely. Not even a man of letters. Rather priest plus prize-fighter plus (in some implied kindly geniality) Father Christmas without the beard.

And then at the last something enigmatic…. Or did one imagine that because one knew how great he was?

Nathalie was nineteen years and no fool. She had had this face in front of her, framed in a neat black frame for the last six years, had carried it with her everywhere, had had it always in her bedroom wherever she might be. For was he not her uncle, her famous, marvellous uncle whom she had never seen but had made her hero, her conception of God, indeed, ever since she could remember?

How tiny, but how defiant, she had been on that first morning at the Polchester High School, when, hemmed in by tormentors, she had boasted: “You can do what you like, but I’ve got a grander uncle than you have!”

The name, Hans Frost, had meant nothing to them until they had enquired of fathers and mothers at home, but then, after those enquiries, she had received her coveted glory.

“Mother says he’s the most wonderful writer. What’s he like? Does he take you to theatres when you’re in London?”

And then must come the sad confession that she had never seen him, that he had perhaps never heard of her, that he was her uncle only because he had married her aunt.

And yet some glory lingered. The time had come at last when she read his books. Always surreptitiously. They were forbidden. Mrs. Proudie thought them shocking. All except the fairy stories, and they might also be shocking, did one understand what they meant….

Nathalie read some of the fairy stories first: The Crystal Bell, The Duchess of Paradis, The Palace of Ice. She did not at the time bother about inner meanings. She took the pictures for what they were. The Prince in The Crystal Bell crossing the Lake of Fire, the Duchess of Paradis opening the casket of jade, the Dwarfs in Green Parrots tying the tails of the monkeys together while they slept. Then (she was seventeen now) she came to the novels. She saved up her money and bought The Praddons, The Silver Tree, Joy Has Three Faces, and The Chinese Miracle.

Of these she liked The Praddons best. She could follow that easily with its crowds of people, its London scene, and its definite story of Isabel Praddon and her unhappy marriage. She noticed that the later in his life the books appeared the more difficult they became.

She always cut pieces from the paper when they concerned him. The greatest time was when, in his fifty-ninth year, he was dangerously ill. The whole of London, the whole of England, even the whole of Europe and America, waited breathlessly.

She read how groups of people lingered outside his door, how the King and Queen sent enquiries, she remembered the newspaper headlines on the morning after the crisis of his illness was successfully passed.

He had never, perhaps, been quite so famous again. The war had immediately followed. Uncle Hans’ mother–dead many years–had been a German. He had lived in retirement during the war, had said very little. After The Chinese Miracle, which came out in the autumn of 1914, he had published nothing in the war years save his volume of essays, The War and the Artist.