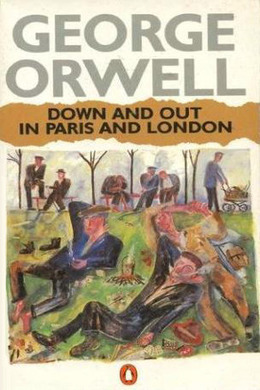 Down and Out in Paris and London

This unusual fictional account - in good part autobiographical - narrates without self-pity and often with humor the adventures of a penniless British writer among the down-and-out of two great cities. The Parisian episode is fascinating for its expose of the kitchens of posh French restaurants, where the narrator works at the bottom of the culinary echelon as dishwasher, or plongeur. In London, while waiting for a job, he experiences the world of tramps, street people, and free lodging houses. In the tales of both cities we learn some sobering Orwellian truths about poverty and society.

The rue du Coq d’Or, Paris, seven in the morning. A succession of furious, choking yells from the street. Madame Monce, who kept the little hotel opposite mine, had come out on to the pavement to address a lodger on the third floor. Her bare feet were stuck into sabots and her grey hair was streaming down.

MADAME MONCE: ‘Salope! Salope! How many times have I told you not to squash bugs on the wallpaper? Do you think you’ve bought the hotel, eh? Why can’t you throw them out of the window like everyone else? Putain! Salope!’

THE WOMAN ON THE THIRD FLOOR: ‘Vache!’

Thereupon a whole variegated chorus of yells, as windows were flung open on every side and half the street joined in the quarrel. They shut up abruptly ten minutes later, when a squadron of cavalry rode past and people stopped shouting to look at them.

I sketch this scene, just to convey something of the spirit of the rue du Coq d’Or. Not that quarrels were the only thing that happened there– but still, we seldom got through the morning without at least one outburst of this description. Quarrels, and the desolate cries of street hawkers, and the shouts of children chasing orange-peel over the cobbles, and at night loud singing and the sour reek of the refuse-carts, made up the atmosphere of the street.

It was a very narrow street–a ravine of tall, leprous houses, lurching towards one another in queer attitudes, as though they had all been frozen in the act of collapse. All the houses were hotels and packed to the tiles with lodgers, mostly Poles, Arabs and Italians. At the foot of the hotels were tiny bistros, where you could be drunk for the equivalent of a shilling. On Saturday nights about a third of the male population of the quarter was drunk. There was fighting over women, and the Arab navvies who lived in the cheapest hotels used to conduct mysterious feuds, and fight them out with chairs and occasionally revolvers. At night the policemen would only come through the street two together. It was a fairly rackety place. And yet amid the noise and dirt lived the usual respectable French shopkeepers, bakers and laundresses and the like, keeping themselves to themselves and quietly piling up small fortunes. It was quite a representative Paris slum.

My hotel was called the Hôtel des Trois Moineaux. It was a dark, rickety warren of five storeys, cut up by wooden partitions into forty rooms. The rooms were small arid inveterately dirty, for there was no maid, and Madame F., the patronne, had no time to do any sweeping. The walls were as thin as matchwood, and to hide the cracks they had been covered with layer after layer of pink paper, which had come loose and housed innumerable bugs. Near the ceiling long lines of bugs marched all day like columns of soldiers, and at night came down ravenously hungry, so that one had to get up every few hours and kill them in hecatombs. Sometimes when the bugs got too bad one used to burn sulphur and drive them into the next room; whereupon the lodger next door would retort by having his room sulphured, and drive the bugs back. It was a dirty place, but homelike, for Madame F. and her husband were good sorts. The rent of the rooms varied between thirty and fifty francs a week.

The lodgers were a floating population, largely foreigners, who used to turn up without luggage, stay a week and then disappear again. They were of every trade–cobblers, bricklayers, stonemasons, navvies, students, prostitutes, rag-pickers. Some of them were fantastically poor. In one of the attics there was a Bulgarian student who made fancy shoes for the American market. From six to twelve he sat on his bed, making a dozen pairs of shoes and earning thirty-five francs; the rest of the day he attended lectures at the Sorbonne. He was studying for the Church, and books of theology lay face-down on his leather-strewn floor. In another room lived a Russian woman and her son, who called himself an artist. The mother worked sixteen hours a day, darning socks at twenty-five centimes a sock, while the son, decently dressed, loafed in the Montparnasse cafés. One room was let to two different lodgers, one a day worker and the other a night worker. In another room a widower shared the same bed with his two grown-up daughters, both consumptive.

There were eccentric characters in the hotel. The Paris slums are a gathering-place for eccentric people–people who have fallen into solitary, half-mad grooves of life and given up trying to be normal or decent. Poverty frees them from ordinary standards of behaviour, just as money frees people from work. Some of the lodgers in our hotel lived lives that were curious beyond words.