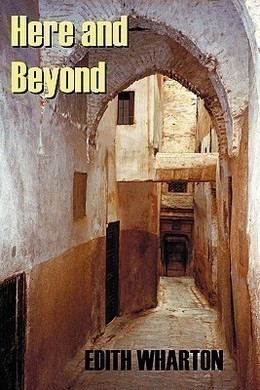 Here and Beyond is a collection of six short stories, which includes ghost stories, social dramas and character studies set in Brittany, New England, and Morocco. Two of these tales, The Young Gentleman and Bewitched, display distinct gothic leaning in their emphasis on looming architecture and the slow reveal of hidden secrets. The first story, Miss Mary Pask, pays strong tribute to Edgar Allen Poe’s Fall of the House of Usher with the eponymous character suffering from a ‘cataleptic trance’ which leaves her with appearance of death. In the resolution, Wharton deviates from the more cataclysmic solution offered by Poe, but retains an emphasis on the fragility of the narrator.

It was not till the following spring that I plucked up courage to tell Mrs. Bridgeworth what had happened to me that night at Morgat.

In the first place, Mrs. Bridgeworth was in America; and after the night in question I lingered on abroad for several months–not for pleasure, God knows, but because of a nervous collapse supposed to be the result of having taken up my work again too soon after my touch of fever in Egypt. But, in any case, if I had been door to door with Grace Bridgeworth I could not have spoken of the affair before, to her or to any one else; not till I had been rest-cured and built up again at one of those wonderful Swiss sanatoria where they clean the cobwebs out of you. I could not even have written to her–not to save my life. The happenings of that night had to be overlaid with layer upon layer of time and forgetfulness before I could tolerate any return to them.

The beginning was idiotically simple; just the sudden reflex of a New England conscience acting on an enfeebled constitution. I had been painting in Brittany, in lovely but uncertain autumn weather, one day all blue and silver, the next shrieking gales or driving fog. There is a rough little white-washed inn out on the Pointe du Raz, swarmed over by tourists in summer but a sea-washed solitude in autumn; and there I was staying and trying to do waves, when some one said: “You ought to go over to Cape something else, beyond Morgat.”

I went, and had a silver-and-blue day there; and on the way back the name of Morgat set up an unexpected association of ideas: Morgat–Grace Bridgeworth–Grace’s sister, Mary Pask–“You know my darling Mary has a little place now near Morgat; if you ever go to Brittany do go to see her. She lives such a lonely life–it makes me so unhappy.”

That was the way it came about. I had known Mrs. Bridgeworth well for years, but had only a hazy intermittent acquaintance with Mary Pask, her older and unmarried sister. Grace and she were greatly attached to each other, I knew; it had been Grace’s chief sorrow, when she married my old friend Horace Bridgeworth, and went to live in New York, that Mary, from whom she had never before been separated, obstinately lingered on in Europe, where the two sisters had been travelling since their mother’s death. I never quite understood why Mary Pask refused to join Grace in America. Grace said it was because she was “too artistic”–but, knowing the elder Miss Pask, and the extremely elementary nature of her interest in art, I wondered whether it were not rather because she disliked Horace Bridgeworth. There was a third alternative–more conceivable if one knew Horace–and that was that she may have liked him too much. But that again became untenable (at least I supposed it did) when one knew Miss Pask: Miss Pask with her round flushed face, her innocent bulging eyes, her old-maidish flat decorated with art-tidies, and her vague and timid philanthropy. Aspire to Horace–!

Well, it was all rather puzzling, or would have been if it had been interesting enough to be worth puzzling over. But it was not. Mary Pask was like hundreds of other dowdy old maids, cheerful derelicts content with their innumerable little substitutes for living. Even Grace would not have interested me particularly if she hadn’t happened to marry one of my oldest friends, and to be kind to his friends. She was a handsome capable and rather dull woman, absorbed in her husband and children, and without an ounce of imagination; and between her attachment to her sister and Mary Pask’s worship of her there lay the inevitable gulf between the feelings of the sentimentally unemployed and those whose affections are satisfied. But a close intimacy had linked the two sisters before Grace’s marriage, and Grace was one of the sweet conscientious women who go on using the language of devotion about people whom they live happily without seeing; so that when she said: “You know it’s years since Mary and I have been together–not since little Molly was born. If only she’d come to America! Just think…Molly is six, and has never seen her darling auntie…” when she said this, and added: “If you go to Brittany promise me you’ll look up my Mary,” I was moved in that dim depth of one where unnecessary obligations are contracted.

And so it came about that, on that silver-and-blue afternoon, the idea “Morgat–Mary Pask–to please Grace” suddenly unlocked the sense of duty in me. Very well: I would chuck a few things into my bag, do my day’s painting, go to see Miss Pask when the light faded, and spend the night at the inn at Morgat. To this end I ordered a rickety one-horse vehicle to await me at the inn when I got back from my painting, and in it I started out toward sunset to hunt for Mary Pask…