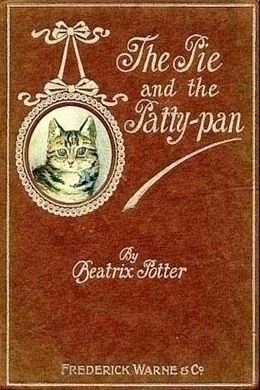 The Tale of the Pie and the Patty Pan

The Tale of the Pie and the Patty Pan features the houses, gardens and streets of the village of Sawrey, where Beatrix Potter lived, at Hill Top, her first farm. The inhabitants, however, are animals rather than people, and problems arise when Ribby the cat invites Duchess the dog to tea. A pussycat named Ribby invites a dog called Duchess to tea, and this is the start of a story involving two pies, two ovens, and two unusual friends.

Once upon a time there was a Pussy-cat called Ribby, who invited a little dog called Duchess, to tea.

“Come in good time, my dear Duchess,” said Ribby’s letter, “and we will have something so very nice. I am baking it in a pie-dish–a pie-dish with a pink rim. You never tasted anything so good! And you shall eat it all! I will eat muffins, my dear Duchess!” wrote Ribby.

Duchess read the letter and wrote an answer:–“I will come with much pleasure at a quarter past four. But it is very strange. I was just going to invite you to come here, to supper, my dear Ribby, to eat something most delicious.

“I will come very punctually, my dear Ribby,” wrote Duchess; and then at the end she added–“I hope it isn’t mouse?”

And then she thought that did not look quite polite; so she scratched out “isn’t mouse” and changed it to “I hope it will be fine,” and she gave her letter to the postman.

But she thought a great deal about Ribby’s pie, and she read Ribby’s letter over and over again.

“I am dreadfully afraid it will be mouse!” said Duchess to herself–“I really couldn’t, couldn’t eat mouse pie. And I shall have to eat it, because it is a party. And my pie was going to be veal and ham. A pink and white pie-dish! and so is mine; just like Ribby’s dishes; they were both bought at Tabitha Twitchit’s.”

Duchess went into her larder and took the pie off a shelf and looked at it.

“It is all ready to put into the oven. Such lovely pie-crust; and I put in a little tin patty-pan to hold up the crust; and I made a hole in the middle with a fork to let out the steam–Oh I do wish I could eat my own pie, instead of a pie made of mouse!”

Duchess was quite delighted with her own cleverness!

Ribby in the meantime had received Duchess’s answer, and as soon as she was sure that the little dog could come–she popped her pie into the oven. There were two ovens, one above the other; some other knobs and handles were only ornamental and not intended to open. Ribby put the pie into the lower oven; the door was very stiff.

“The top oven bakes too quickly,” said Ribby to herself. “It is a pie of the most delicate and tender mouse minced up with bacon. And I have taken out all the bones; because Duchess did nearly choke herself with a fish-bone last time I gave a party. She eats a little fast–rather big mouthfuls. But a most genteel and elegant little dog; infinitely superior company to Cousin Tabitha Twitchit.”

Ribby put on some coal and swept up the hearth. Then she went out with a can to the well, for water to fill up the kettle.

Then she began to set the room in order, for it was the sitting-room as well as the kitchen. She shook the mats out at the front-door and put them straight; the hearthrug was a rabbit-skin. She dusted the clock and the ornaments on the mantelpiece, and she polished and rubbed the tables and chairs.

Then she spread a very clean white table-cloth, and set out her best china tea-set, which she took out of a wall-cupboard near the fireplace. The tea-cups were white with a pattern of pink roses; and the dinner-plates were white and blue.

When Ribby had laid the table she took a jug and a blue and white dish, and went out down the field to the farm, to fetch milk and butter.

When she came back, she peeped into the bottom oven; the pie looked very comfortable.

Ribby put on her shawl and bonnet and went out again with a basket, to the village shop to buy a packet of tea, a pound of lump sugar, and a pot of marmalade.

And just at the same time, Duchess came out of her house, at the other end of the village.