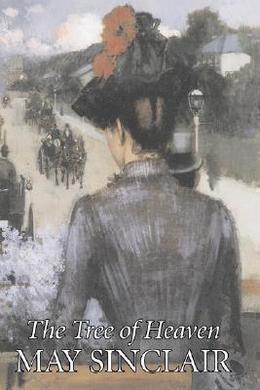 The Tree of Heaven

The Tree of Heaven draws upon Sinclair’s experiences in the First World War. Concerned with the Harrisoon family, it follows the three children, Michael, Nicky, and Dorothy, as they grow up in the 1900s and face the war as young adults. Dorothy hosts a sufragette meeting that lands her in jail, then trains with the Red Cross and joins an ambulance unit in Belgium. Michael is a poet involved with avant-garde artists, embracing pacifism and resisting family pressure to join up. Nicky is an engineer who enlists early and invents an early prototype of the tank. The novel examines the ideals of the suffrage movement, the spiritual uplift of the war, and the personal cost both could extract from those involved.

Frances Harrison was sitting out in the garden under the tree that her husband called an ash-tree, and that the people down in her part of the country called a tree of Heaven.

It was warm under the tree, and Frances might have gone to sleep there and wasted an hour out of the afternoon, if it hadn’t been for the children.

Dorothy, Michael and Nicholas were going to a party, and Nicky was excited. She could hear Old Nanna talking to Michael and telling him to be a good boy. She could hear young Mary-Nanna singing to Baby John. Baby John was too young himself to go to parties; so to make up for that he was riding furiously on Mary-Nanna’s knee to the tune of the “Bumpetty-Bumpetty Major!”

It was Nicky’s first party. That was why he was excited.

He had asked her for the third time what it would be like; and for the third time she had told him. There would be dancing and a Magic Lantern, and a Funny Man, and a Big White Cake covered with sugar icing and Rosalind’s name on it in pink sugar letters and eight little pink wax candles burning on the top for Rosalind’s birthday. Nicky’s eyes shone as she told him.

Dorothy, who was nine years old, laughed at Nicky.

And every time she laughed at him his mother kissed him.

And for the fifth time he asked, “When will it be time to go?”

“Not for another hour and a half, my sweetheart.”

Frances had a tranquil nature and she never worried. But as she sat under her tree of Heaven a thought came that made a faint illusion of worry for her mind. She had forgotten to ask Grannie and Auntie Louie and Auntie Emmeline and Auntie Edie to tea.

She had come to think of them like that in relation to her children rather than to her or to each other.

It was a Tuesday, and they had not been there since Friday. Perhaps, she thought, I’d better send over for them now. Especially as it’s such a beautiful afternoon. Supposing I sent Michael?

And yet, supposing Anthony came home early? He was always kind to her people, but that was the very reason why she oughtn’t to let them spoil a beautiful afternoon for him. It could not be said that any of them was amusing.

She could still hear Mary-Nanna singing her song about the Bumpetty-Bumpetty Major. She could still hear Old Nanna talking to Michael and telling him to be a good boy. That could only end in Michael being naughty. To avert naughtiness or any other disaster from her children was the end of Frances’s existence.

So she called Michael to come to her. He came, running like a little dog, obediently.

Michael was glad that he had been sent across the Heath to Grannie’s house with a message. It made him feel big and brave. Besides, it would put off the moment when Mary-Nanna would come for him, to make him ready for the party. He was not sure that he wanted to go to it.

Michael did not much like going to Grannie’s house either. In all the rooms there was a queer dark-greenness and creepiness. It smelt of bird-cages and elder bushes and of Grandpapa’s funeral. And when you had seen Auntie Edie’s Senegal wax-bills, and the stuffed fish, and the inside of Auntie Louie’s type-writer there was nothing else to see.

His mother said that Grandpapa’s funeral was all over, and that the green creepiness came from the green creepers. But Michael knew it didn’t. She only said things like that to make you feel nice and comfy when you were going to bed. Michael knew very well that they had put Grandpapa into the drawing-room and locked the door so that the funeral men shouldn’t get at him and take him away too soon. And Auntie Louie had kept the key in her pocket.

Old Nanna wouldn’t let him talk about it; but Mary-Nanna had told him that was what funerals meant. All the same, as he went up the flagged path, he took care not to look through the black panes of the window where the elder bush was, lest he should see Grandpapa’s coffin standing in the place where the big table used to be, and Grandpapa lying inside it wrapped in a white sheet.

Michael’s message was that Mummy sent her love, and would Grannie and Auntie Louie and Auntie Emmeline and Auntie Edie come to tea? She was going to have tea in the garden, and would they please come early? As early as possible. That was the part he was not to forget.