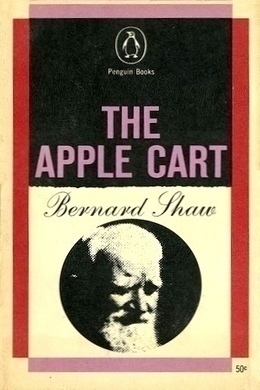 The Apple Cart is Shaw’s comedic play in which the King defeats an attempt by his popularly elected Prime Minister to deprive him of the right to influence public opinion through the press: in short, to reduce him to a cipher.

An office in the royal palace. Two writing-tables face each other from opposite sides of the room, leaving plenty of room between them. Each table has a chair by it for visitors. The door is in the middle of the farthest wall. The clock shews that it is a little past 11; and the light is that of a fine summer morning.

Sempronius, smart and still presentably young, shews his right profile as he sits at one of the tables opening the King’s letters.

Pamphilius, middle aged, shews his left as he leans back in his chair at the other table with a pile of the morning papers at his elbow, reading one of them. This goes on silently for some time. Then Pamphilius, putting down his paper, looks at Sempronius for a moment before speaking.

PAMPHILIUS. What was your father?

PAMPHILIUS. What was your father?

PAMPHILIUS. Yes. What was he?

PAMPHILIUS. I dont mean his religion. I mean his profession. And his politics.

PAMPHILIUS. Do you mean that he was a parson?

SEMPRONIUS. Not at all. He was a sort of spectacular artist. He got up pageants and Lord Mayors’ Shows and military tattoos and big public ceremonies and things like that. He arranged the last two coronations. That was how I got my job here in the palace. All our royal people knew him quite well: he was behind the scenes with them.

PAMPHILIUS. Behind the scenes and yet believed they were all real!

SEMPRONIUS. Yes. Believed in them with all his soul.

PAMPHILIUS. Although he manufactured them himself?

SEMPRONIUS. Certainly. Do you suppose a baker cannot believe sincerely in the sacrifice of the Mass or in holy communion because he has baked the consecrated wafer himself?

PAMPHILIUS. I never thought of that.

SEMPRONIUS. My father might have made millions in the theatres and film studios. But he refused to touch them because the things they represented hadnt really happened. He didnt mind doing the christening of Queen Elizabeth in Shakespear’s Henry the Eighth because that had really happened. It was a celebration of royalty. But not anything romantic: not though they offered him thousands.

PAMPHILIUS. Did you ever ask him what he really thought about it all? But of course you didnt: one cant ask one’s father anything about himself.

SEMPRONIUS. My dear Pam: my father never thought. He didnt know what thought meant. Very few people do, you know. He had vision: actual bodily vision, I mean; and he had an oddly limited sort of imagination. What I mean is that he couldnt imagine anything he didnt see; but he could imagine that what he did see was divine and holy and omniscient and omnipotent and eternal and everything that is impossible if only it looked splendid enough, and the organ was solemn enough, or the military bands brassy enough.

PAMPHILIUS. You mean that he had to get everything from outside.

SEMPRONIUS. Exactly. He’d never have felt anything if he hadnt had parents to feel about in his childhood, and a wife and babies to feel about when he grew up. He’d never have known anything if he hadnt been taught at school. He couldnt amuse himself: he had to pay oceans of money to other people to amuse him with all sorts of ghastly sports and pleasures that would have driven me into a monastery to escape from them. You see it was all ritual: he went to the Riviera every winter just as he went to church.

PAMPHILIUS. By the way, is he alive? I should like to know him.

PAMPHILIUS. What do you mean? of solitude?

SEMPRONIUS. He couldnt bear to be alone for a moment: it was death to him. Somebody had to be with him always.

PAMPHILIUS. Oh well, come! That was friendly and kindly. It shews he had something inside him after all.

SEMPRONIUS. Not a bit. He never talked to his friends. He played cards with them. They never exchanged a thought.

PAMPHILIUS. He must have been a rum old bird.

SEMPRONIUS. Not rum enough to be noticed. There are millions like him.

PAMPHILIUS. But what about his dying of solitude? Was he imprisoned?

SEMPRONIUS. No. His yacht struck a reef and sank somewhere off the north of Scotland; and he managed to swim to an uninhabited island. All the rest were drowned; and he was not taken off for three weeks. When they found him he was melancholy mad, poor old boy; and he never got over it. Simply from having no one to play cards with, and no church to go to.

PAMPHILIUS. My dear Sem: one isnt alone on an uninhabited island. My mother used to stand me on the table and make me recite about it.