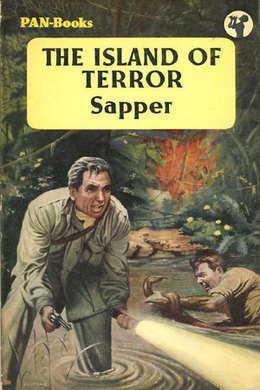 The Island of Terror

When intrepid adventurer, Jim Maitland, returns to England for a brief visit, he meets a charming young woman named Judy Draycott, who solicits his help in a perilous matter. She relates the story of her brother, Arthur, drifting in South America until he meets an old sailor who, on his deathbed, tells him about a hoard of buried treasure. When Arthur is shot during an attempt to return to London, Maitland persuades his cousin, Percy, to accompany him to Lone Tree Island, where the treasure is allegedly buried. But what can they do with only half a map? And can they evade the undesirables on their trail?

Jim Maitland tilted his top-hat a little farther back on his head, and lit a cigarette. In front of him twinkled the myriad lights of London; behind the door he had just closed twinkled the few candles that had not yet guttered out. The Bright Young Things liked candles stuck in empty bottles as their illuminations.

The hour was two of a summer’s morning; the scene–somewhere in Hampstead. And as he walked down the steps into the drive he pondered for the twentieth time on the asininity of man–himself in particular. Why on earth had he ever allowed that superlative idiot Percy to drag him to such a fool performance?

Percy was his cousin, a point he endeavoured unsuccessfully to forget. In fact the only thing to be said in favour of Percy’s continued existence was that since he embodied in his person every known form of fatuitousness, he might be regarded as doing duty for the rest of the family.

He had seen Percy afar off in the club before dinner, and with a strangled grunt of terror had fled into the cloak-room only to realise a moment later that he had delivered himself bound hand and foot into the enemy’s hands. For the cloak-room was a cul-de-sac, and already a strange bleating cry could be heard outside the entrance. Percy had spotted him, and relinquishing the idea of burying himself in the dirty towel basket he prepared to meet his fate.

“Jim, my dear old friend and relative, you are the very bird I want. When did you return to the village?”

He gazed dispassionately at his cousin through his eyeglass, and a slight shudder shook him.

“Hullo! Percy,” he remarked. “I hoped you hadn’t seen me. Are you still as impossibly awful as you were when I last met you?”

Another shudder shook him; short of physical violence all hope was gone. He was in the clutches of this throw back to the tail period.

“But for the fact that I adore your dear mother nothing would induce me to dine anywhere near you,” he answered. “As it is I happen to be free, so I will.”

“Splendid. And afterwards I shall take you to a gathering of the chaps.”

“You’ll love ‘em, old fruit. We have one once a month. Starts about midnight. Just a rag, don’t you know. We’re meeting this time in a cellar up in Hampstead. Beer and bones. Or perhaps scrambled eggs. Or even kippers. Except that kippers whiff a bit in a cellar, don’t they?”

He suffered Percy to lead him to the dining-room, and as he looked round the familiar room it seemed impossible that it was more than five years since he had last been in it. A new face or two amongst the waiters–though not amongst the senior ones, they were all there; a few new faces, of course, amongst the members; otherwise it might have been yesterday that he was dining there with Terence Ogilvy and Teddy Burchaps preparatory to their departure for the interior of Brazil. And of the three of them only he had returned….

He glanced up to find the wine steward standing by the table.

“Much the same, sir. There is still some of the Lafite vintage wine left.”

Good old Soames! Remembering that after five years. And yet–why not? That was life; to him a member’s taste in wine was a thing of paramount importance. Especially, though he did not add this mentally, when the member was Jim Maitland.

That he was a sort of legendary hero in the club, was a fact of which Jim was completely ignorant. And had anyone hinted at it he would either have been annoyed or else roared with laughter. To him a journey to the interior of Turkestan came as naturally as one to Brighton comes to the ordinary man. He had been born with wanderlust in his bones; and being sufficiently endowed with this world’s goods to avoid the necessity of working for a living, he had followed his bent ever since he left Oxford.

And the result, had he known it, would have surprised him. For it was not only in the club that a glamour lay round his name, but in a hundred odd places fringing the seven seas. Anywhere, in fact, where the men who do things are gathered together, you will sooner or later hear his name mentioned. And if some of the stories grow in the telling it is hardly to be wondered at, though in all conscience the originals are good enough without any embroidery.

Talk to deep-sea sailors from Shanghai to Valparaiso; talk to cattlemen on the estancias of the Argentine and after a while, casually introduce his name. Then you will know what I mean.