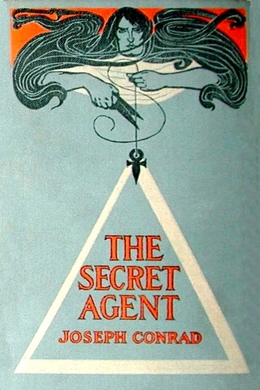 A triangle of conspiracy is built, then destroyed, by the self-interest of its participants. Mr. Verloc, employed by a foreign embassy to incriminate an anarchist group, instead destroys his family, his illusions, and his own life in a terrorist act gone utterly wrong. Conrad’s ironic and troubling novel exposes political extremism and the strength-and vanity-of illusion.

The shop was small, and so was the house. It was one of those grimy brick houses which existed in large quantities before the era of reconstruction dawned upon London. The shop was a square box of a place, with the front glazed in small panes. In the daytime the door remained closed; in the evening it stood discreetly but suspiciously ajar.

The window contained photographs of more or less undressed dancing girls; nondescript packages in wrappers like patent medicines; closed yellow paper envelopes, very flimsy, and marked two-and-six in heavy black figures; a few numbers of ancient French comic publications hung across a string as if to dry; a dingy blue china bowl, a casket of black wood, bottles of marking ink, and rubber stamps; a few books, with titles hinting at impropriety; a few apparently old copies of obscure newspapers, badly printed, with titles like The Torch, The Gong—rousing titles. And the two gas jets inside the panes were always turned low, either for economy’s sake or for the sake of the customers.

These customers were either very young men, who hung about the window for a time before slipping in suddenly; or men of a more mature age, but looking generally as if they were not in funds. Some of that last kind had the collars of their overcoats turned right up to their moustaches, and traces of mud on the bottom of their nether garments, which had the appearance of being much worn and not very valuable. And the legs inside them did not, as a general rule, seem of much account either. With their hands plunged deep in the side pockets of their coats, they dodged in sideways, one shoulder first, as if afraid to start the bell going.

The bell, hung on the door by means of a curved ribbon of steel, was difficult to circumvent. It was hopelessly cracked; but of an evening, at the slightest provocation, it clattered behind the customer with impudent virulence.

It clattered; and at that signal, through the dusty glass door behind the painted deal counter, Mr Verloc would issue hastily from the parlour at the back. His eyes were naturally heavy; he had an air of having wallowed, fully dressed, all day on an unmade bed. Another man would have felt such an appearance a distinct disadvantage. In a commercial transaction of the retail order much depends on the seller’s engaging and amiable aspect. But Mr Verloc knew his business, and remained undisturbed by any sort of æsthetic doubt about his appearance. With a firm, steady-eyed impudence, which seemed to hold back the threat of some abominable menace, he would proceed to sell over the counter some object looking obviously and scandalously not worth the money which passed in the transaction: a small cardboard box with apparently nothing inside, for instance, or one of those carefully closed yellow flimsy envelopes, or a soiled volume in paper covers with a promising title. Now and then it happened that one of the faded, yellow dancing girls would get sold to an amateur, as though she had been alive and young.

Sometimes it was Mrs Verloc who would appear at the call of the cracked bell. Winnie Verloc was a young woman with a full bust, in a tight bodice, and with broad hips. Her hair was very tidy. Steady-eyed like her husband, she preserved an air of unfathomable indifference behind the rampart of the counter. Then the customer of comparatively tender years would get suddenly disconcerted at having to deal with a woman, and with rage in his heart would proffer a request for a bottle of marking ink, retail value sixpence (price in Verloc’s shop one-and-sixpence), which, once outside, he would drop stealthily into the gutter.

The evening visitors—the men with collars turned up and soft hats rammed down—nodded familiarly to Mrs Verloc, and with a muttered greeting, lifted up the flap at the end of the counter in order to pass into the back parlour, which gave access to a passage and to a steep flight of stairs. The door of the shop was the only means of entrance to the house in which Mr Verloc carried on his business of a seller of shady wares, exercised his vocation of a protector of society, and cultivated his domestic virtues. These last were pronounced. He was thoroughly domesticated. Neither his spiritual, nor his mental, nor his physical needs were of the kind to take him much abroad. He found at home the ease of his body and the peace of his conscience, together with Mrs Verloc’s wifely attentions and Mrs Verloc’s mother’s deferential regard.