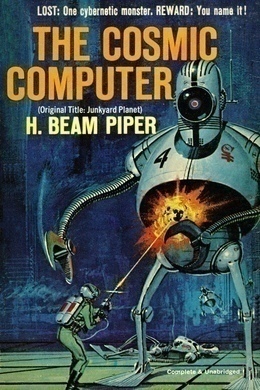 During the System States’ War, Poictesme was the general HQ and supply depot for the final thrust at the enemy. When the war ended, the buildings, the munitions, the freeze-dried food supplies, were all abandoned without a thought. Now the colony world is a poverty-stricken agricultural society with only two exports: the fermented products of their world’s unique grapes, and the salvaged war equipment, now selling at about 1% of its true value. And, persisting over the decades, is the legend of MERLIN, the super-computer said to have planned the grand strategy which successfully concluded the war. “If we could only find Merlin,” the inhabitants said to each other, “all our problems would be solved.” Then young Conn Maxwell returned from Earth, with a university degree, and a few clues about the location and the true nature of Merlin. And the sure knowledge that finding the Cosmic Computer would be the worst thing that could possibly happen to his home world.

Conn Maxwell, at the armor-glass front of the observation deck, watched the landscape rush out of the horizon and vanish beneath the ship, ten thousand feet down. He thought he knew how an hourglass must feel with the sand slowly draining out.

The words echoed in his mind as though he had spoken them aloud, and then, realizing that he never addressed himself as sir, he turned. It was the first mate.

He had a clipboard in his hand, and he was wearing a Terran Federation Space Navy uniform of forty years, or about a dozen regulation-changes, ago. Once Conn had taken that sort of thing for granted. Now it was obtruding upon him everywhere.

“Thirty minutes to Litchfield, sir,” the first officer repeated, and gave him the clipboard to check the luggage list. Valises, two; trunks, two; microbook case, one. The last item fanned a small flicker of anger, not at any person, not even at himself, but at the whole infernal situation. He nodded.

“That’s everything. Not many passengers left aboard, are there?”

“You’re the only one, first class, sir. About forty farm laborers on the lower deck.” He dismissed them as mere cargo. “Litchfield’s the end of the run.”

The mate looked again at his name on the list and grinned.

“Sure; you’re Rodney Maxwell’s son. Your father’s been giving us a lot of freight lately. I guess I don’t have to tell you about Litchfield.”

“Maybe you do. I’ve been away for six years. Tell me, are they having labor trouble now?”

“Labor trouble?” The mate was surprised. “You mean with the farm-tramps? Ten of them for every job, if you call that trouble.”

“Well, I noticed you have steel gratings over the gangway heads to the lower deck, and all your crewmen are armed. Not just pistols, either.”

“Well, I guess you’d call them that. A gang’ll come aboard, dressed like farm-tramps; they’ll have tommy guns and sawed-off shotguns in their bindles. When the ship’s airborne and out of reach of help, they’ll break out their guns and take her. Usually kill all the crew and passengers. They don’t like to leave live witnesses,” the mate said. “You heard about the Harriet Barne, didn’t you?”

She was Transcontinent & Overseas, the biggest contragravity ship on the planet.

“They didn’t pirate her, did they?”

The mate nodded. “Six months ago; Blackie Perales’ gang. There was just a tag end of a radio call, that ended in a shot. Time the Air Patrol got to her estimated position it was too late. Nobody’s ever seen ship, officers, crew or passengers since.”

“Well, great Ghu; isn’t the Government doing anything about it?”

“Sure. They offered a big reward for the pirates, dead or alive. And there hasn’t been a single case of piracy inside the city limits of Storisende,” he added solemnly.

The Calder Range had grown to a sharp blue line on the horizon ahead, and he could see the late afternoon sun on granite peaks. Below, the fields were bare and brown, and the woods were autumn-tinted. They had been green with new foliage when he had last seen them, and the wine-melon fields had been in pink blossom. Must have gotten the crop in early, on this side of the mountains. Maybe they were still harvesting, over in the Gordon Valley. Or maybe this gang below was going to the wine-pressing. Now that he thought of it, he’d seen a lot of cask staves going aboard at Storisende.

Yet there seemed to be less land under cultivation now than six years ago. He could see squares of bracken and low brush that had been melon fields recently, among the new forests that had grown up in the past forty years. The few stands of original timber towered above the second growth like hills; those trees had been there when the planet had been colonized.

That had been two hundred years ago, at the beginning of the Seventh Century, Atomic Era. The name “Poictesme” told that–Surromanticist Movement, when they were rediscovering James Branch Cabell. Old Genji Gartner, the scholarly and half-piratical space-rover whose ship had been the first to enter the Trisystem, had been devoted to the romantic writers of the Pre-Atomic Era. He had named all the planets of the Alpha System from the books of Cabell, and those of Beta from Spenser’s Faerie Queene, and those of Gamma from Rabelais. Of course, the camp village at his first landing site on this one had been called Storisende.