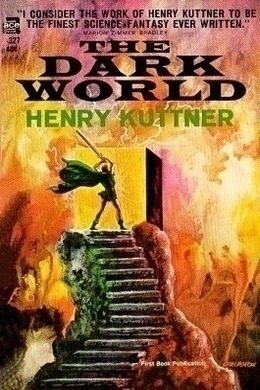 World War II veteran Edward Bond’s recuperation from a disastrous fighter plane crash takes a distinct turn for the weird when he encounters a giant wolf, a red witch, and the undeniable power of the need-fire, a portal to a world of magic and swordplay at once terribly new and hauntingly familiar. In the Dark World, Bond opposes the machinations of the dread lord Ganelon and his terrible retinue of werewolves, wizards, and witches, but all is not as it seems in this shadowy mirror of the real world, and Bond discovers that a part of him feels more at home here than he ever was on Earth.

To the north thin smoke made a column against the darkening sky. Again I felt the unreasoning fear, the impulse toward nightmare flight that had been with me for a long time now. I knew it was without reason. There was only smoke, rising from the swamps of the tangled Limberlost country, not fifty miles from Chicago, where man has outlawed superstition with strong bonds of steel and concrete.

I knew it was only a camper’s fire, yet I knew it was not. Something, far back in my mind, knew what the smoke rose from, and who stood about the fire, peering my way through the trees.

I looked away, my glance slipping around the crowded walls – shelves bearing the random fruit of my uncle’s magpie collector’s instinct. Opium pipes of inlaid work and silver, golden chessmen from India, a sword…

Deep memories stirred within me – deep panic. I was beneath the sword in two strides, tearing it from the wall, my fingers cramping hard around the hilt. Not fully aware of what I did, I found myself facing the window and the distant smoke again. The sword was in my fist, but feeling wrong, not reassuring, not as the sword ought to feel.

“It’s the wrong sword,” I heard myself saying helplessly.

Then something like a mist cleared from my brain. I blinked at him stupidly, wondering what was happening to me. My voice answered.

“It isn’t the sword. It should have come from Cambodia. It should have been one of the three talismans of the Fire King and the Water King. Three very great talismans – the fruit of â¢cui, gathered at the time of the deluge, but still fresh – the rattan with flowers that never fade, and the sword of Yan, the guarding spirit.”

My uncle squinted at me through pipe-smoke. He shook his head.

“You’ve changed, Ed,” he said in his deep, gentle voice. “You’ve changed a lot. I suppose because of the war – it’s to be expected. Arid you’ve been sick. But you never used to be interested in things like that before. I think you spend too much time at the libraries. I’d hoped this vacation would help. The rest –”

I could see and smell it now. I could feel again the fever that had raged so long through me as I lay in the tabooed hut.

My mind went back eighteen months to the last hour when things were normal for me. It was in the closing phases of World War II, and I was flying over the Sumatran jungle. War, of course, is never good or normal, but until that one blinding moment in the air I had been an ordinary man, sure of myself, sure of my place in the world, with no nagging fragments of memory too elusive to catch.

Then everything blanked out, suddenly and completely. I never knew what it was. There was nothing it could have been. My only injuries came when the plane struck, and they were miraculously light. But I had been whole and unhurt when the blindness and blankness came over me.

The friendly Bataks found me as I lay in the ruined plane. They brought me through a fever and a raging illness with their strange, crude, effective ways of healing, but I sometimes thought they had done me no service when they saved me. And their witch-doctor had his doubts, too.

He knew something. He worked his curious, futile charms with knotted string and rice, sweating with effort I did not understand – then. I remembered the scarred, ugly mask looming out of the shadow, the hands moving in gestures of strange power.

“Come back, O soul, where thou are lingering in the wood, or in the hills, or by the river. See, I call thee with a toemba bras, with an egg of the fowl Rajah moelija, with the eleven healing leaves….”

“Yes, they were sorry for me at first, all of them. The witchdoctor was the first to sense something wrong and the awareness spread. I could feel it spreading, as their attitude changed. They were afraid. Not of me, I thought, but of – what?

Before the helicopter came to take me back to civilization, the witch-doctor had told me a little. As much, perhaps, as he dared.

Something is searching for you – “ He used a word I did not understand. “ – and it has come from the Other World, the ghostlands, to hunt you down. Remember this: all magic things must be taboo to you. And if that too fails, perhaps you may find a weapon in magic. But we cannot help you. Our powers are not strong enough for that.”

He was glad to see me go. They were all glad.

And after that, unrest. For something had changed me utterly. The fever? Perhaps. At any rate, I didn’t feel like the same man. There were dreams, memories – haunting urgencies as if I had somehow, somewhere left some vital job unfinished.