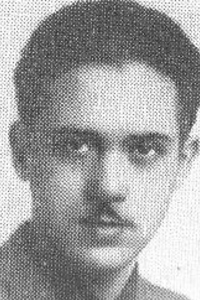 Henry Kuttner was an American author of science fiction, fantasy and horror. Kuttner was known for his literary prose and worked in close collaboration with his wife, C. L. Moore. They met through their association with the Lovecraft Circle, a group of writers and fans who corresponded with H. P. Lovecraft. Among Kuttner’s most popular work were the Gallegher stories, about a man who invented high-tech solutions to client problems (including an insufferably egomaniacal robot) when he was stinking drunk, only to be completely unable to remember exactly what he had built or why after sobering up. These stories were later collected in Robots Have No Tails. A friend of Lovecraft’s as well as of Clark Ashton Smith, Kuttner contributed several stories to the Cthulhu Mythos genre invented by those authors (among others). Among these were The Secret of Kralitz. The Eater of Souls, The Salem Horror, The Invaders and The Hunt.

Out of the dark–out of the unknown–came Karkora…rotting the souls of the kings of Cyrena. For Karkora, the Pallid One, was a creature more loathsome tha...read more »

William Boyce, in whose veins flows the blood of crusaders, goes on the quest of a lost memory and a mysterious woman in an odd clime where cities move ...read more »

The Creature from Beyond Infinity (1940)

Like a great, lethal snake, plague creeps through the galaxies. No conscious entity can halt its progress, and life is slowly draining from planet after...read more »

She spoke in a tongue dead a thousand years, and she had no memory for the man she faced. Yet he had held her tightly but a few short years before, had ...read more »

One of Salem’s oldest and most decrepit cemeteries was put in Old Masson’s charge, but he didn’t mind—he was more than sufficiently compensated by the t...read more »

A story of the shocking revelation that came to the twenty-first Baron Kralitz. Kuttner’s contribution to Lovecraft’s Cthulhu Mythos, a dark gothic tale...read more »

An eldritch, fearsome tale of the worship of the fish-god in the ancient world, and the prowess of a doughty swordsman in old Atlantis. Lycon and Elak e...read more »

Called to the end of time by a being they knew only as The Face of Ea, four adventurers from the twentieth century faced a power that not even the super...read more »

Deep in an unexplored jungle, Brian Raft sought the secret of the legendary VALLEY OF THE FLAME. Somewhere there was a radioactive fire that could perfo...read more »

The life of an anthropologist is no doubt filled much of the time with the monotonous routine of carefully assembling powdery relics of ancient races an...read more »