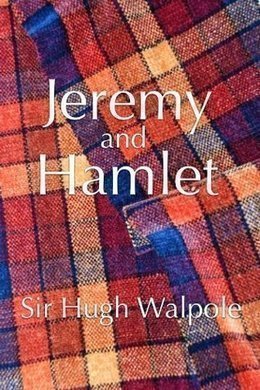 Jeremy and Hamlet is the second book in the Jeremy Trilogy published by Sir Hugh Walpole. Published to critical acclaim across the world, it quickly became a bestseller. Hamlet in the second novel is Jeremy’s trusty best friend and sidekick, his dog. The portrayal of young Jeremy is authentic, engaging, and incredibly realistic glimpse of an English boyhood.

There was a certain window between the kitchen and the pantry that was Hamlet’s favourite. Thirty years ago–these chronicles are of the year 1894–the basements of houses in provincial English towns, even of large houses owned by rich people, were dark, chill, odour- full caverns hissing with ill-burning gas and smelling of ill- cooked cabbage. The basement of the Coles’ house in Polchester was as bad as any other, but this little window between the kitchen and the pantry was higher in the wall than the other basement windows, almost on a level with the iron railings beyond it, and offering a view down over Orange Street and, obliquely, sharp to the right and past the Polchester High School, a glimpse of the Cathedral Towers themselves.

Inside the window was a shelf, and on this shelf Hamlet would sit for hours, his peaked beard interrogatively a-tilt, his leg sticking out from his square body as though it were a joint-leg and worked like the limb of a wooden toy, his eyes, sad and mysterious, staring into Life….

It was not, of course, of Life that he was thinking; only very high- bred and in-bred dogs are conscious philosophers.

His ears were stretched for a sound of the movements of Mrs. Hounslow the cook, his nostrils distended for a whiff of the food that she was manipulating, but his eyes were fixed upon the passing show, the pageantry, the rough-and-tumble of the world, and every once and again the twitch of his Christmas-tree tail would show that something was occurring in this life beyond the window that could supervene, for a moment at any rate, over the lust of the stomach and the lure of the clattering pan.

He was an older dog than he had been on that snowy occasion of his first meeting with the Cole family–two years older in fact. Older and fatter. He had now a round belly. His hair hung as wildly as ever it had done around his eyes, but beneath the peaked and aristocratic beard there was a sad suspicion of a double chin.

HE HAD SOLD HIS SOUL TO THE COOK.

When we sell our souls we are ourselves, of course, in the main responsible. But others have often had more to do with our catastrophe than the world in general can know. Had Jeremy, his master, not gone to school, Hamlet’s soul would yet have been his own; Jeremy gone, Hamlet’s spiritual life was nobody’s concern. He fell down, deep down, into the very heart of the basement, and nobody minded.

He himself did not mind; he was very glad. He loved the basement.

It had happened that during the last holidays Jeremy had gone into the country to stay with the parents of a school friend–Hamlet had had therefore nearly nine months’ freedom from his master’s influence. Mr. and Mrs. Cole did not care for him very deeply. Helen hated him. Mary loved him but was so jealous of Jeremy’s affection for him that she was not sorry to see him banished, and Barbara, only two and a half, had as yet very tenuous ideas on this subject.

Mrs. Hounslow, a very fat, sentimental woman, liked to have something or someone at her side to give her rich but transient emotions–emotions evoked by a passing band, the reading of an accident in the newspaper, or some account of an event in the Royal family. The kitchen-maid, a girl of no home and very tender years, longed for affection from somebody, but Mrs. Hounslow disliked all kitchen-maids on principle–therefore Hamlet received what the kitchen-maid needed, and that is the way of the world.

Did there run through Hamlet’s brain earlier stories of an emotion purer than the lust for bones, of a devotion higher and more ardent than the attachment to a dripping saucepan?

Did he sometimes, as he sat reflectively beside the kitchen fire, see pictures of his master’s small nose, of woods when, at his master’s side, he sniffed for rabbits, of days when he raced along shining sands after a stone that he had no real intention of finding? Did he still feel his master’s hand upon his head and that sudden twitch as that hand caught a tuft of hair and twisted it? …

No one can tell of what he was thinking as he sat on the shelf staring out of his window at old Miss Mulready, burdened with parcels, climbing Orange Street, at the lamplighter hurrying with his flame from post to post, at old Grinder’s war-worn cab stumbling across the cobbles past the High School, the old horse faltering at every step, at the green evening sky slipping into dusk, the silver-pointed stars, the crooked roofs blackening into shadow, the lights of the town below the hill jumping like gold jack-in-the-boxes into the shadowy air.

No one could tell of what he was thinking.