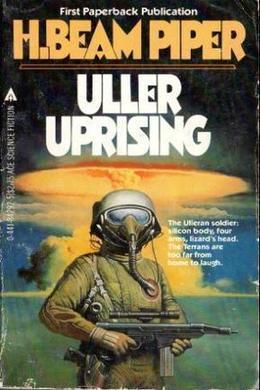 Uller Uprising is a story about the past repeating itself and past events having a direct effect on the future. Piper based the story on the Sepoy Mutiny. A trading company like the East India Trading Company of the 18th century has been established on Uller. Local officials rule and the humans profit and also try to help better the lives of the locals. Not all of the natives are pleased with this arrangement and a rebellion begins. It is up to Captain Carlos and his men to save the Chartered Company and the Terran Federation.

General Carlos von Schlichten threw his cigarette away, flexed his hands in his gloves, and set his monocle more firmly in his eye, stepping forward as the footsteps on the stairway behind him ceased and the other officers emerged from the squat flint keep–Captain Cazabielle, the post CO; big, chocolate-brown Brigadier-General Themistocles M’zangwe; little Colonel Hideyoshi O’Leary. Far in front of him, to the left, the horizon was lost in the cloudbank over Takkad Sea; directly in front, and to the right, the brown and gray and black flint mountains sawed into the sky until they vanished in the distance. Unseen below, the old caravan-trail climbed one side of the pass and slid down the other, a sheer five hundred feet below the parapet and the two corner catapult-platforms which now mounted 90-mm guns. On the little hundred-foot-square parade ground in front of the keep, his aircar was parked, and the soldiers were assembled.

Ten or twelve of them were Terrans–a couple of lieutenants, sergeants, gunners, technicians, the sergeant-driver and corporal-gunner of his own car. The other fifty-odd were Ulleran natives. They stood erect on stumpy legs and broad, six-toed feet. They had four arms apiece, one pair from true shoulders and the other connected to a pseudo-pelvis midway down the torso. Their skins were slate-gray and rubbery, speckled with pinhead-sized bits of quartz that had been formed from perspiration, for their body-tissues were silicone instead of carbon-hydrogen. Their narrow heads were unpleasantly saurian; they had small, double-lidded red eyes, and slit-like nostrils, and wide mouths filled with opalescent teeth. Except for their belts and equipment, they were completely naked; the uniform consisted of the emblem of the Chartered Uller Company stencil-painted on chests and backs. Clothing, to them, was unnecessary, either for warmth or modesty. As to the former, they were cold-blooded and could stand a temperature-range of from a hundred and twenty to minus one hundred Centigrade. Von Schlichten had seen them sleeping in the open with their bodies covered with frost or freezing rain; he had also seen them wade through boiling water. As to the second, they had practically no sex-inhibitions; they were all of the same gender, true, functional, hermaphrodites. Any individual among them could bear young, or fertilize the ova of any other individual. Fifteen years ago, when he had come to Uller as a former Terran Federation captain newly commissioned colonel in the army of the Uller Company, it had taken some time before he had become accustomed to the detailing of a non-com and a couple of privates out of each platoon for baby-sitting duty. At least, though, they didn’t have the squaw-trouble around army posts on Uller that they had on Thor, where he had last been stationed.

An airjeep, coming in out of the sun, circled the crag-top fort and let down onto the terrace next to von Schlichten’s command-car. It carried a bristle of 15-mm machine-guns, and two of the eight 50-mm rocket-tubes on either side were empty and freshly smoke-stained. The duraglass canopy slid back, and the two-man crew–lieutenant-driver and sergeant-gunner–jumped out. Von Schlichten knew them both.

Both saluted, in the informal, hell-with-rank-we’re-all-human manner of Terran soldiers on extraterrestrial duty, and returned the greeting.

“How’s the Jeel situation?” he asked, then nodded toward the fired rocket-tubes. “I see you had some shooting.”

“Yes, sir,” the lieutenant said. “Two bands of them. We sighted the first coming up the eastern side of the mountain about two miles this side of the Blue Springs. We got about half of them with MG-fire, and the rest dived into a big rock-crevice. We had to use two rockets on them, and then had to let down and pot a few of them with our pistols. We caught the second band in that little punchbowl place about a mile this side of Zortolk’s Old Fort. There were only six of them; they were bunched together, feeding. Off one of their own gang, I’d say; the way we’ve been keeping them up in the high rocks, they’ve been eating inside the family quite a bit, lately. We let them have two rockets. No survivors. Not many very big pieces, in fact. We let down at Zortolk’s for a beer, after that, and Captain Martinelli told us that one of his jeeps caught what he thinks was the same band that was down off the mountain night-before-last and ate those peasants on Prince Neeldink’s estate.”