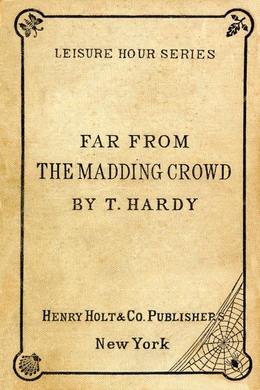 Far from the Madding Crowd

Far from the Madding Crowd was the first of Hardy’s novels to apply the name of Wessex to the landscape of south-west England, and the first to gain him widespread popularity as a novelist. When the beautiful and spirited Bathsheba Everdene inherits her own farm, she attracts three very different suitors; the seemingly commonplace man-of-the-soil Gabriel Oak, the dashing young soldier Francis Troy, and the respectable, middle-aged Farmer Boldwood. Her choice, and the tragedy it provokes, lie at the centre of Hardy’s ambivalent story.

When Farmer Oak smiled, the corners of his mouth spread till they were within an unimportant distance of his ears, his eyes were reduced to chinks, and diverging wrinkles appeared round them, extending upon his countenance like the rays in a rudimentary sketch of the rising sun.

His Christian name was Gabriel, and on working days he was a young man of sound judgment, easy motions, proper dress, and general good character. On Sundays he was a man of misty views, rather given to postponing, and hampered by his best clothes and umbrella: upon the whole, one who felt himself to occupy morally that vast middle space of Laodicean neutrality which lay between the Communion people of the parish and the drunken section,–that is, he went to church, but yawned privately by the time the congregation reached the Nicene creed, and thought of what there would be for dinner when he meant to be listening to the sermon. Or, to state his character as it stood in the scale of public opinion, when his friends and critics were in tantrums, he was considered rather a bad man; when they were pleased, he was rather a good man; when they were neither, he was a man whose moral colour was a kind of pepper-and-salt mixture.

Since he lived six times as many working-days as Sundays, Oak’s appearance in his old clothes was most peculiarly his own–the mental picture formed by his neighbours in imagining him being always dressed in that way. He wore a low-crowned felt hat, spread out at the base by tight jamming upon the head for security in high winds, and a coat like Dr. Johnson’s; his lower extremities being encased in ordinary leather leggings and boots emphatically large, affording to each foot a roomy apartment so constructed that any wearer might stand in a river all day long and know nothing of damp–their maker being a conscientious man who endeavoured to compensate for any weakness in his cut by unstinted dimension and solidity.

Mr. Oak carried about him, by way of watch, what may be called a small silver clock; in other words, it was a watch as to shape and intention, and a small clock as to size. This instrument being several years older than Oak’s grandfather, had the peculiarity of going either too fast or not at all. The smaller of its hands, too, occasionally slipped round on the pivot, and thus, though the minutes were told with precision, nobody could be quite certain of the hour they belonged to. The stopping peculiarity of his watch Oak remedied by thumps and shakes, and he escaped any evil consequences from the other two defects by constant comparisons with and observations of the sun and stars, and by pressing his face close to the glass of his neighbours’ windows, till he could discern the hour marked by the green-faced timekeepers within. It may be mentioned that Oak’s fob being difficult of access, by reason of its somewhat high situation in the waistband of his trousers (which also lay at a remote height under his waistcoat), the watch was as a necessity pulled out by throwing the body to one side, compressing the mouth and face to a mere mass of ruddy flesh on account of the exertion required, and drawing up the watch by its chain, like a bucket from a well.

But some thoughtful persons, who had seen him walking across one of his fields on a certain December morning–sunny and exceedingly mild–might have regarded Gabriel Oak in other aspects than these. In his face one might notice that many of the hues and curves of youth had tarried on to manhood: there even remained in his remoter crannies some relics of the boy. His height and breadth would have been sufficient to make his presence imposing, had they been exhibited with due consideration. But there is a way some men have, rural and urban alike, for which the mind is more responsible than flesh and sinew: it is a way of curtailing their dimensions by their manner of showing them. And from a quiet modesty that would have become a vestal, which seemed continually to impress upon him that he had no great claim on the world’s room, Oak walked unassumingly and with a faintly perceptible bend, yet distinct from a bowing of the shoulders. This may be said to be a defect in an individual if he depends for his valuation more upon his appearance than upon his capacity to wear well, which Oak did not.

He had just reached the time of life at which “young” is ceasing to be the prefix of “man” in speaking of one. He was at the brightest period of masculine growth, for his intellect and his emotions were clearly separated: he had passed the time during which the influence of youth indiscriminately mingles them in the character of impulse, and he had not yet arrived at the stage wherein they become united again, in the character of prejudice, by the influence of a wife and family. In short, he was twenty-eight, and a bachelor.