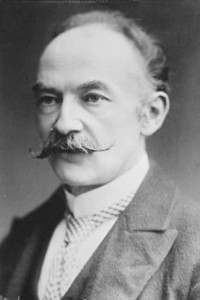 Thomas Hardy was an English novelist and poet of the naturalist movement, although he has shown elements of the previous romantic and enlightenment periods of literature, such as his fascination with the supernatural. He regarded himself primarily as a poet and composed novels mainly for financial gain. The bulk of his work, set mainly in the semi-fictional land of Wessex, delineates characters struggling against their passions and circumstances. Hardy said that he first introduced Wessex in Far from the Madding Crowd, which was his first financially successful novel, so much so that we was able to give up architectural work and pursue a literary career.

Paula Power inherits a medieval castle from her industrialist father who has purchased it from the aristocratic De Stancy family. She employs two archit...read more »

Elfride finds herself caught in a battle between her heart, her mind and the expectations of her parents and society. The novel is notable for the stron...read more »

Described by Hardy as a tale of “mystery, entanglement, surprise and moral obliquity”, his first published novel violated the literary decorum of its da...read more »

Far from the Madding Crowd was the first of Hardy’s novels to apply the name of Wessex to the landscape of south-west England, and the first to gain him...read more »

Often thought of as Thomas Hardy’s best work, not only for the elaborate structure of the plot, where small and subtle details lead to the character’s r...read more »

A pretty young girl has to leave home to make money for her family. She is clever and a good worker; but she is uneducated and does not know the cruel w...read more »

The only novel from Hardy that that provides a lighter tale, The Hand of Ethelberta, gives account of the life of a woman who lifts herself to the highe...read more »

Thomas Hardy’s almost supernatural insight into the course of wayward lives, his instinctive feeling for the beauty of the rural landscape, and his powe...read more »

Hardy distrusted the application of nineteenth-century empiricism to history because he felt it marginalized important human elements. In The Trumpet Ma...read more »

The Well-Beloved completes the cycle of Hardy’s great novels, reiterating his favourite themes of man’s eternal quest for perfection in both love and ar...read more »

Love, and the erratic heart, are at the centre of Hardy’s ‘woodland story’. Set in the beautiful Blackmoor Vale, The Woodlanders concerns the fortunes o...read more »

Classified by Hardy as a romance and fantasy and now regarded as one of his minor works. The book is one of the Wessex novels, set in a parallel version...read more »

One of the most popular of Hardy’s novels, this charming pastoral idyll is a lightly humorous depiction of life in an early Victorian rural community. T...read more »