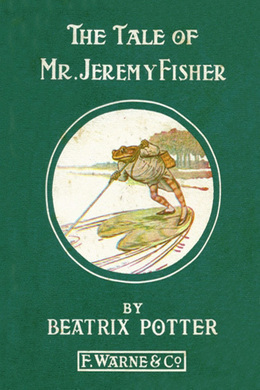 The Tale of Mr. Jeremy Fisher

Jeremy Fisher is a frog that lives in a small house in the middle of the buttercups of the pond . Worn mackintosh and galoshes goes fishing with his rod made of a stalk of grass and a horsehair. A trout rises from the water and seizes him with a snap, but doesn’t like the taste of his raincoat thus spits him immediately. From that day Jerermy no longer went fishing. Book illustrated with beautiful Potter’s watercolors.

Once upon a time there was a frog called Mr. Jeremy Fisher; he lived in a little damp house amongst the buttercups at the edge of a pond.

The water was all slippy-sloppy in the larder and in the back passage.

But Mr. Jeremy liked getting his feet wet; nobody ever scolded him, and he never caught a cold!

He was quite pleased when he looked out and saw large drops of rain, splashing in the pond–

“I will get some worms and go fishing and catch a dish of minnows for my dinner,” said Mr. Jeremy Fisher. “If I catch more than five fish, I will invite my friends Mr. Alderman Ptolemy Tortoise and Sir Isaac Newton. The Alderman, however, eats salad.”

Mr. Jeremy put on a macintosh, and a pair of shiny goloshes; he took his rod and basket, and set off with enormous hops to the place where he kept his boat.

The boat was round and green, and very like the other lily-leaves. It was tied to a water-plant in the middle of the pond.

Mr. Jeremy took a reed pole, and pushed the boat out into open water. “I know a good place for minnows,” said Mr. Jeremy Fisher.

Mr. Jeremy stuck his pole into the mud and fastened the boat to it.

Then he settled himself cross-legged and arranged his fishing tackle. He had the dearest little red float. His rod was a tough stalk of grass, his line was a fine long white horse-hair, and he tied a little wriggling worm at the end.

The rain trickled down his back, and for nearly an hour he stared at the float.

“This is getting tiresome, I think I should like some lunch,” said Mr. Jeremy Fisher.

He punted back again amongst the water-plants, and took some lunch out of his basket.

“I will eat a butterfly sandwich, and wait till the shower is over,” said Mr. Jeremy Fisher.

A great big water-beetle came up underneath the lily leaf and tweaked the toe of one of his goloshes.

Mr. Jeremy crossed his legs up shorter, out of reach, and went on eating his sandwich.