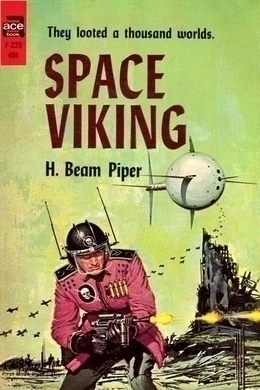 Get set for rip-roaring adventure in this tale from the imagination of science fiction luminary H. Beam Piper. In the aftermath of a massive war, many once-developed planets have been reduced to rubble, and the few survivors have lost all vestiges of civilization. A group of so-called ‘Space Vikings’ have begun to roam the galaxy, snatching up everything valuable that has been left behind.

They stood together at the parapet, their arms about each other’s waists, her head against his cheek. Behind, the broad leaved shrubbery gossiped softly with the wind, and from the lower main terrace came music and laughing voices. The city of Wardshaven spread in front of them, white buildings rising from the wide spaces of green treetops, under a shimmer of sun-reflecting aircars above. Far away, the mountains were violet in the afternoon haze, and the huge red sun hung in a sky as yellow as a ripe peach.

His eye caught a twinkle ten miles to the southwest, and for an instant he was puzzled. Then he frowned. The sunlight on the two thousand-foot globe of Duke Angus’ new ship, the Enterprise, back at the Gorram shipyards after her final trial cruise. He didn’t want to think about that, now.

Instead, he pressed the girl closer and whispered her name, “Elaine,” and then, caressing every syllable, “Lady Elaine Trask of Traskon.”

“Oh, no, Lucas!” Her protest was half joking and half apprehensive. “It’s bad luck to be called by your married name before the wedding.”

“I’ve been calling you that in my mind since the night of the Duke’s ball, when you were just home from school on Excalibur.”

She looked up from the corner of her eye.

“That was when I started calling me that, too,” she confessed.

“There’s a terrace to the west at Traskon New House,” he told her. “Tomorrow, we’ll have our dinner there, and watch the sunset together.”

“I know. I thought that was to be our sunset-watching place.”

“You have been peeking,” he accused. “Traskon New House was to be your surprise.”

“I always was a present-peeker, New Year’s and my birthdays. But I only saw it from the air. I’ll be very surprised at everything inside,” she promised. “And very delighted.”

And when she’d seen everything and Traskon New House wasn’t a surprise any more, they’d take a long space trip. He hadn’t mentioned that to her, yet. To some of the other Sword-Worlds–Excalibur, of course, and Morglay and Flamberge and Durendal. No, not Durendal; the war had started there again. But they’d have so much fun. And she would see clear blue skies again, and stars at night. The cloud-veil hid the stars from Gram, and Elaine had missed them, since coming home from Excalibur.

The shadow of an aircar fell briefly upon them and they looked up and turned their heads, in time to see it sink with graceful dignity toward the landing-stage of Karval House, and he glimpsed its blazonry–sword and atom-symbol, the badge of the ducal house of Ward. He wondered if it were Duke Angus himself, or just some of his people come ahead of him. They should get back to their guests, he supposed. Then he took her in his arms and kissed her, and she responded ardently. It must have been all of five minutes since they’d done that before.

A slight cough behind them brought them apart and their heads around. It was Sesar Karvall, gray-haired and portly, the breast of his blue coat gleaming with orders and decorations and the sapphire in the pommel of his dress-dagger twinkling.

“Who came in the Ward car?” Elaine asked.

“No; not by introduction. I’d like to, before he spaces out.” He had nothing against Harkaman personally; only against what he represented. “Is the Duke coming?”

“Oh, surely. Lionel of Newhaven and the Lord of Northport are coming with him. They’re at the Palace now.” Karvall hesitated. “His nephew’s back in town.”

Elaine was distressed; she started to say: “Oh, dear! I hope he doesn’t–”

“Has Dunnan been bothering Elaine again?”

“Nothing to take notice of. He was here, yesterday, demanding to speak with her. We got him to leave without too much unpleasantness.”

“It’ll be something for me to take notice of, if he keeps it up after tomorrow.”

For his seconds and Andray Dunnan’s, that was; he hoped it wouldn’t come to that. He didn’t want to have to shoot a kinsman to the house of Ward, and a crazy man to boot.

“I’m terribly sorry for him,” Elaine was saying. “Father, you should have let me talk to him. I might have made him understand.”

Sesar Karvall was shocked. “Child, you couldn’t have subjected yourself to that! The man is insane!” Then he saw her bare shoulders, and was even more shocked. “Elaine, your shawl!”