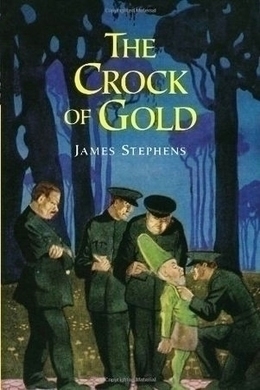 The Crock of Gold

Pass a pleasant afternoon with this delightful collection of short stories. Simple but not simplistic, these diverting tales are rendered in exquisitely rich and often playful language that will have you lingering over sentences and highlighting your favorite passages so you can revisit them again and again. The Crock of Gold is the perfect blend of literary virtuosity and lighthearted fun. A truly unique novel, a mixture of philosophy, Irish folklore and the neverending battle of the sexes, written with charm, humour and good grace.

In the centre of the pine wood called Coilla Doraca there lived not long ago two Philosophers. They were wiser than anything else in the world except the Salmon who lies in the pool of Glyn Cagny into which the nuts of knowledge fall from the hazel bush on its bank. He, of course, is the most profound of living creatures, but the two Philosophers are next to him in wisdom. Their faces looked as though they were made of parchment, there was ink under their nails, and every difficulty that was submitted to them, even by women, they were able to instantly resolve. The Grey Woman of Dun Gortin and the Thin Woman of Inis Magrath asked them the three questions which nobody had ever been able to answer, and they were able to answer them. That was how they obtained the enmity of these two women which is more valuable than the friendship of angels. The Grey Woman and the Thin Woman were so incensed at being answered that they married the two Philosophers in order to be able to pinch them in bed, but the skins of the Philosophers were so thick that they did not know they were being pinched. They repaid the fury of the women with such tender affection that these vicious creatures almost expired of chagrin, and once, in a very ecstacy of exasperation, after having been kissed by their husbands, they uttered the fourteen hundred maledictions which comprised their wisdom, and these were learned by the Philosophers who thus became even wiser than before.

In due process of time two children were born of these marriages. They were born on the same day and in the same hour, and they were only different in this, that one of them was a boy and the other one was a girl. Nobody was able to tell how this had happened, and, for the first time in their lives, the Philosophers were forced to admire an event which they had been unable to prognosticate; but having proved by many different methods that the children were really children, that what must be must be, that a fact cannot be controverted, and that what has happened once may happen twice, they described the occurrence as extraordinary but not unnatural, and submitted peacefully to a Providence even wiser than they were.

The Philosopher who had the boy was very pleased because, he said, there were too many women in the world, and the Philosopher who had the girl was very pleased also because, he said, you cannot have too much of a good thing: the Grey Woman and the Thin Woman, however, were not in the least softened by maternity-they said that they had not bargained for it, that the children were gotten under false presences, that they were respectable married women, and that, as a protest against their wrongs, they would not cook any more food for the Philosophers. This was pleasant news for their husbands, who disliked the women’s cooking very much, but they did not say so, for the women would certainly have insisted on their rights to cook had they imagined their husbands disliked the results: therefore, the Philosophers besought their wives every day to cook one of their lovely dinners again, and this the women always refused to do.

They all lived together in a small house in the very centre of a dark pine wood. Into this place the sun never shone because the shade was too deep, and no wind ever came there either, because the boughs were too thick, so that it was the most solitary and quiet place in the world, and the Philosophers were able to hear each other thinking all day long, or making speeches to each other, and these were the pleasantest sounds they knew of. To them there were only two kinds of sounds anywhere–these were conversation and noise: they liked the first very much indeed, but they spoke of the second with stern disapproval, and, even when it was made by a bird, a breeze, or a shower of rain, they grew angry and demanded that it should be abolished. Their wives seldom spoke at all and yet they were never silent: they communicated with each other by a kind of physical telegraphy which they had learned among the Shee-they cracked their finger-joints quickly or slowly and so were able to communicate with each other over immense distances, for by dint of long practice they could make great explosive sounds which were nearly like thunder, and gentler sounds like the tapping of grey ashes on a hearthstone. The Thin Woman hated her own child, but she loved the Grey Woman’s baby, and the Grey Woman loved the Thin Woman’s infant but could not abide her own. A compromise may put an end to the most perplexing of situations, and, consequently, the two women swapped children, and at once became the most tender and amiable mothers imaginable, and the families were able to live together in a more perfect amity than could be found anywhere else.