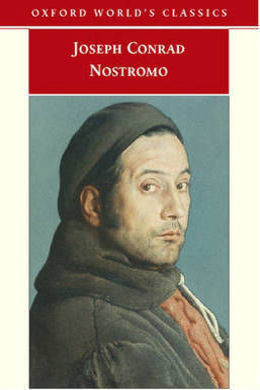 A Tale of the Seaboard

A gripping tale of capitalist exploitation and rebellion, set amid the mist-shrouded mountains of a fictional South American republic, employs flashbacks and glimpses of the future to depict the lure of silver and its effects on men. Conrad’s deep moral consciousness and masterful narrative technique are at their best in this, one of his greatest works.

In the time of Spanish rule, and for many years afterwards, the town of Sulaco—the luxuriant beauty of the orange gardens bears witness to its antiquity—had never been commercially anything more important than a coasting port with a fairly large local trade in ox–hides and indigo. The clumsy deep–sea galleons of the conquerors that, needing a brisk gale to move at all, would lie becalmed, where your modern ship built on clipper lines forges ahead by the mere flapping of her sails, had been barred out of Sulaco by the prevailing calms of its vast gulf. Some harbours of the earth are made difficult of access by the treachery of sunken rocks and the tempests of their shores. Sulaco had found an inviolable sanctuary from the temptations of a trading world in the solemn hush of the deep Golfo Placido as if within an enormous semi–circular and unroofed temple open to the ocean, with its walls of lofty mountains hung with the mourning draperies of cloud.

On one side of this broad curve in the straight seaboard of the Republic of Costaguana, the last spur of the coast range forms an insignificant cape whose name is Punta Mala. From the middle of the gulf the point of the land itself is not visible at all; but the shoulder of a steep hill at the back can be made out faintly like a shadow on the sky.

On the other side, what seems to be an isolated patch of blue mist floats lightly on the glare of the horizon. This is the peninsula of Azuera, a wild chaos of sharp rocks and stony levels cut about by vertical ravines. It lies far out to sea like a rough head of stone stretched from a green–clad coast at the end of a slender neck of sand covered with thickets of thorny scrub. Utterly waterless, for the rainfall runs off at once on all sides into the sea, it has not soil enough—it is said—to grow a single blade of grass, as if it were blighted by a curse. The poor, associating by an obscure instinct of consolation the ideas of evil and wealth, will tell you that it is deadly because of its forbidden treasures. The common folk of the neighbourhood, peons of the estancias, vaqueros of the seaboard plains, tame Indians coming miles to market with a bundle of sugar–cane or a basket of maize worth about threepence, are well aware that heaps of shining gold lie in the gloom of the deep precipices cleaving the stony levels of Azuera. Tradition has it that many adventurers of olden time had perished in the search. The story goes also that within men’s memory two wandering sailors—Americanos, perhaps, but gringos of some sort for certain—talked over a gambling, good–for–nothing mozo, and the three stole a donkey to carry for them a bundle of dry sticks, a water–skin, and provisions enough to last a few days. Thus accompanied, and with revolvers at their belts, they had started to chop their way with machetes through the thorny scrub on the neck of the peninsula.

On the second evening an upright spiral of smoke (it could only have been from their camp–fire) was seen for the first time within memory of man standing up faintly upon the sky above a razor–backed ridge on the stony head. The crew of a coasting schooner, lying becalmed three miles off the shore, stared at it with amazement till dark. A negro fisherman, living in a lonely hut in a little bay near by, had seen the start and was on the lookout for some sign. He called to his wife just as the sun was about to set. They had watched the strange portent with envy, incredulity, and awe.

The impious adventurers gave no other sign. The sailors, the Indian, and the stolen burro were never seen again. As to the mozo, a Sulaco man—his wife paid for some masses, and the poor four–footed beast, being without sin, had been probably permitted to die; but the two gringos, spectral and alive, are believed to be dwelling to this day amongst the rocks, under the fatal spell of their success. Their souls cannot tear themselves away from their bodies mounting guard over the discovered treasure. They are now rich and hungry and thirsty—a strange theory of tenacious gringo ghosts suffering in their starved and parched flesh of defiant heretics, where a Christian would have renounced and been released.

These, then, are the legendary inhabitants of Azuera guarding its forbidden wealth; and the shadow on the sky on one side with the round patch of blue haze blurring the bright skirt of the horizon on the other, mark the two outermost points of the bend which bears the name of Golfo Placido, because never a strong wind had been known to blow upon its waters.