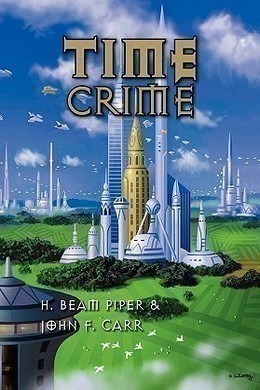 The Paratime Police had a real headache this time! Tracing one man in a population of millions is easy–compared to finding one gang hiding out on one of billions of probability lines! In Time Crime, detectives have to pursue criminals into the past, future, and other possible presents. SF lovers, settle in for a pulse-pounding – and thought-provoking – adventure.

Kiro Soran, the guard captain, stood in the shadow of the veranda roof, his white cloak thrown back to display the scarlet lining. He rubbed his palm reflectively on the checkered butt of his revolver and watched the four men at the table.

“And ten tens are a hundred,” one of the clerks in blue jackets said, adding another stack to the pile of gold coins.

“Nineteen hundreds,” one of the pair in dirty striped robes agreed, taking a stone from the box in front of him and throwing it away. Only one stone remained. “One more hundred to pay.”

One of the blue-jacketed plantation clerks made a tally mark; his companion counted out coins, ten and ten and ten.

“I don’t like this,” he said, in another and entirely different language. “I know, chattel slavery’s an established custom on this sector, and we have to conform to local usages, but it sickens me to have to haggle with these swine over the price of human beings. On the Zarkantha Sector, we used nothing but free wage-labor.”

“Migratory workers,” the guard captain said. “Humanitarian considerations aside, I can think of a lot better ways of meeting the labor problem on a fruit plantation than by buying slaves you need for three months a year and have to feed and quarter and clothe and doctor the whole twelve.”

“Twenty hundreds of obus,” the clerk who had been counting the money said. “That is the payment, is it not, Coru-hin-Irigod?”

“That is the payment,” the slave dealer replied.

The clerk swept up the remaining coins, and his companion took them over and put them in an iron-bound chest, snapping the padlock. The two guards who had been loitering at one side slung their rifles and picked up the chest, carrying it into the plantation house. The slave dealer and his companion arose, putting their money into a leather bag; Coru-hin-Irigod turned and bowed to the two men in white cloaks.

“The slaves are yours, noble lords,” he said.

Across the plantation yard, six more men in striped robes, with carbines slung across their backs, approached; with them came another man in a hooded white cloak, and two guards in blue jackets and red caps, with bayoneted rifles. The man in white and his armed attendants came toward the house; the six Calera slavers continued across the yard to where their horses were picketed.

“If I do not offend the noble lords, then,” Coru-hin-Irigod said, “I beg their sufferance to depart. I and my men have far to ride if we would reach Careba by nightfall. The Lord, the Great Lord, the Lord God Safar watch between us until we meet again.”

Urado Alatana, the labor foreman, came up onto the porch as the two slavers went down.

“Have a good look at them, Radd?” the guard captain asked.

“You think I’m crazy enough to let those bandits out of here with two thousand obus–forty thousand Paratemporal Exchange Units–of the Company’s money without knowing what we’re getting?” the other parried. “They’re all right–nice, clean, healthy-looking lot. I did everything but take them apart and inspect the pieces while they were being unshackled at the stockade. I’d like to know where this Coru-hin-Whatshisname got them, though. They’re not local stuff. Lot darker, and they’re jabbering among themselves in some lingo I never heard before. A few are wearing some rags of clothing, and they have odd-looking sandals. I noticed that most of them showed marks of recent whipping. That may mean they’re troublesome, or it may just mean that these Caleras are a lot of sadistic brutes.”

“Poor devils!” The man called Dosu Golan was evidently hoping that he’d never catch himself talking about fellow humans like that. The guard captain turned to him.

“Coming to have a look at them, Doth?” he asked.

“Still not able to look the Company’s property in the face?” the captain asked gently. “You’ll not get used to it any sooner than now.”

“I suppose you’re right.” For a moment Dosu Golan watched Coru-hin-Irigod and his followers canter out of the yard and break into a gallop on the road beyond. Then he tucked his whip under his arm. “All right, then. Let’s go see them.”