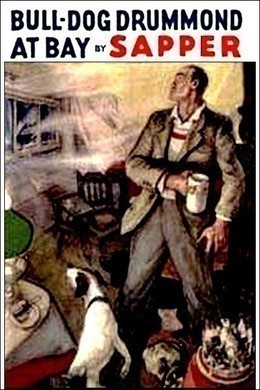 While Hugh “Bulldog” Drummond is staying in an old cottage for a peaceful few days of duck shooting, he is disturbed one night by the sound of men shouting, followed by a large stone that comes crashing through the window. When he goes outside to investigate, he finds a patch of blood in the road, and is questioned by two men who tell him that they are chasing a lunatic who has escaped from the nearby asylum. Drummond plays dumb, but is determined to investigate in his inimitable style when he discovers a cryptic message.

The mist was low-lying. Above it the tops of the telegraph poles stuck out into the starlit night, marking the line of the road which wound over the desolate fen country. A few isolated houses stood like scattered islands in a sea of white cloud–houses in which the lights had long been extinguished, for it was nearing midnight, and the marsh folk do not sit up late.

One house only proved the exception. In size and shape it was just as the others–a typical fenman’s cottage. But from one side of it a diffused white glow shone faintly towards the line of telegraph posts. Above the mist the top room showed black and clear-cut. No light came from that window: the illumination came from the sitting-room below.

The blind was up: the window, regardless of the mist which drifted sluggishly in, was open top and bottom. On the table a lamp was burning, and by its light the contents of the room stood revealed. And when those contents were compared with the living occupant the result was somewhat incongruous.

Over the mantelpiece hung several illuminated texts. They were of a depressing character, which a tasteful colour scheme of yellow beads round red letters was powerless to mitigate. Even a wedding group of the early ‘sixties, which filled the place of honour in the centre, seemed unable to give that snap to the wall which the proud owner had doubtless intended. And the rest of the room was in keeping. A horsehair sofa covered with a red counterpane in which were sewn large, round pieces of coloured glass, adorned one wall: a table, complete with cloth to match the counterpane, and a stuffed weasel under a glass dome, adorned another. And in the window, on a small three-legged stool, reposed a Bible of colossal dimensions.

To the expert the solution was obvious on the spot. This was the parlour; that mysterious, unused room which is found in every similar house; that room, which, when the door is suddenly opened on the unwary visitor, exudes a strange and musty smell strongly reminiscent of a not too recent death behind the wainscot: that room which is utterly wasted on the altar of lower class respectability.

On the night when the mist was drifting just ceiling high the room was proving false to its traditions. Gone was the stale smell of ancient bones: even “Prepare to meet thy God” hung at a more rakish angle. The first was due to the open window: the second to the fact that a disreputable cap was slung on one end of the text. But the effect was all to the good. And since the large young man who at the moment was engaged in filling his pipe was presumably responsible for both acts of vandalism, it might be well to turn from the room to its occupant.

His clothes were quite incredibly ancient. Grey flannel trousers: a sweater that had once been white, and an old shooting-coat padded with leather over the shoulders comprised the outer layer. Underneath, grey socks and brown brogues, with a shirt that was open at the neck completed the picture, whilst a collar, made of the same material as the shirt, had been flung carelessly into the coal-scuttle with a tie inside it.

After a while he rose and stretched himself, and it was not until he stood up that it was possible to realise how very large he was. He stood at least six feet in height, and being broad in proportion he seemed almost to fill the room. Only the spaniel noticed his movement and opened one liquid brown eye–an eye which followed him as he sauntered over to the window and peered out. Then he returned to the table and, picking up his empty tankard, he made his way past the snorer to the kitchen. A final pint was indicated before turning in.

It was while he was drawing it that the terrier gave a sudden, sharp, staccato bark, and the large young man returned to the parlour to find that the kennels were awake. The spaniel was sitting up contemplating the window; the bulldog, though still breathing hard, had emerged from his basket, whilst the terrier was following up his one bark with a steady stream of bad language under his breath.

“What is it, fellers?” said the large young man genially. “Does some varlet approach our domain?”

Holding his beer in his hand he again went to the window.

“Shut up, Jock, you ass!” he cried. “How can I hear anything if you’re making that damn fool noise?”