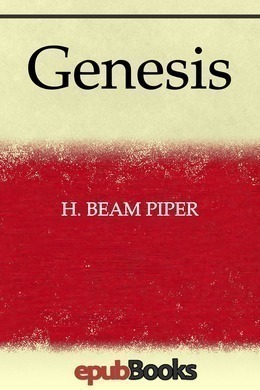 Was this ill-fated expedition the end of a proud, old race–or the beginning of a new one? There are strange gaps in our records of the past. We find traces of man-like things–but, suddenly, man appears, far too much developed to be the ‘next step’ in a well-linked chain of evolutionary evidence. Perhaps something like the events of this story furnishes the answer to the riddle.

Reach into the distant past and discover the fascinating origins of the advanced technology that allows future Earth inhabitants to journey between parallel universes at their whim. This entry in H. Beam Piper’s popular Paratime series homes in on the Martian colonists who visited Earth hundreds of thousands of years ago.

Aboard the ship, there was neither day nor night; the hours slipped gently by, as vistas of star-gemmed blackness slid across the visiscreens. For the crew, time had some meaning–one watch on duty and two off. But for the thousand-odd colonists, the men and women who were to be the spearhead of migration to a new and friendlier planet, it had none. They slept, and played, worked at such tasks as they could invent, and slept again, while the huge ship followed her plotted trajectory.

Kalvar Dard, the army officer who would lead them in their new home, had as little to do as any of his followers. The ship’s officers had all the responsibility for the voyage, and, for the first time in over five years, he had none at all. He was finding the unaccustomed idleness more wearying than the hectic work of loading the ship before the blastoff from Doorsha. He went over his landing and security plans again, and found no probable emergency unprepared for. Dard wandered about the ship, talking to groups of his colonists, and found morale even better than he had hoped. He spent hours staring into the forward visiscreens, watching the disc of Tareesh, the planet of his destination, grow larger and plainer ahead.

Now, with the voyage almost over, he was in the cargo-hold just aft of the Number Seven bulkhead, with six girls to help him, checking construction material which would be needed immediately after landing. The stuff had all been checked two or three times before, but there was no harm in going over it again. It furnished an occupation to fill in the time; it gave Kalvar Dard an excuse for surrounding himself with half a dozen charming girls, and the girls seemed to enjoy being with him. There was tall blonde Olva, the electromagnetician; pert little Varnis, the machinist’s helper; Kyna, the surgeon’s-aide; dark-haired Analea; Dorita, the accountant; plump little Eldra, the armament technician. At the moment, they were all sitting on or around the desk in the corner of the store-room, going over the inventory when they were not just gabbling.

“Well, how about the rock-drill bitts?” Dorita was asking earnestly, trying to stick to business. “Won’t we need them almost as soon as we’re off?”

“Yes, we’ll have to dig temporary magazines for our explosives, small-arms and artillery ammunition, and storage-pits for our fissionables and radioactives,” Kalvar Dard replied. “We’ll have to have safe places for that stuff ready before it can be unloaded; and if we run into hard rock near the surface, we’ll have to drill holes for blasting-shots.”

“The drilling machinery goes into one of those prefabricated sheds,” Eldra considered. “Will there be room in it for all the bitts, too?”

Kalvar Dard shrugged. “Maybe. If not, we’ll cut poles and build racks for them outside. The bitts are nono-steel; they can be stored in the open.”

“If there are poles to cut,” Olva added.

“I’m not worrying about that,” Kalvar Dard replied. “We have a pretty fair idea of conditions on Tareesh; our astronomers have been making telescopic observations for the past fifteen centuries. There’s a pretty big Arctic ice-cap, but it’s been receding slowly, with a wide belt of what’s believed to be open grassland to the south of it, and a belt of what’s assumed to be evergreen forest south of that. We plan to land somewhere in the northern hemisphere, about the grassland-forest line. And since Tareesh is richer in water that Doorsha, you mustn’t think of grassland in terms of our wire-grass plains, or forests in terms of our brush thickets. The vegetation should be much more luxuriant.”

“If there’s such a large polar ice-cap, the summers ought to be fairly cool, and the winters cold,” Varnis reasoned. “I’d think that would mean fur-bearing animals. Colonel, you’ll have to shoot me something with a nice soft fur; I like furs.”

Kalvar Dard chuckled. “Shoot you nothing, you can shoot your own furs. I’ve seen your carbine and pistol scores,” he began.