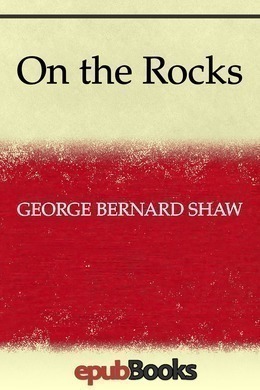 The P.M. in On the Rocks did not win over anybody. The proletarians attacked and repudiated him at once; and the Conservatives, though quite approving of the items in his program which favored their private affairs, deserted him and followed their Die Hard leader the moment he called them to heel. As to militant Dictatorship, it means no more than Gas and Gaiters. At present all the countries which are not, like England, merely sticking in the mud, are dominated by dictators: Stalin, Hitler, Mussolini, Kemal, Roosevelt, Pilsudski, and De Valera. But none of these dictatorships is like any of the others. The only feature they have in common is the abolition of party government and of Oppositions. The notion that the only alternative to the party system is a Tsardom masquerading as a Republican Dictatorship is only a symptom of political ignorance and thoughtlessness, which is unfortunately an almost universal disease at present.

The Cabinet Room in number ten Downing Street, Westminster, the official residence of the British Prime Minister. The illustrious holder of that office, Sir Arthur Chavender, is reading The Times on the hearth under the portrait of Walpole. The fireplace wall is covered with bookshelves; but one bit of it, on Walpole’s right, is a masked door, painted with sham books and shelves, leading to the Minister’s private apartments; and in the end of the same wall, on Walpole’s left, is a door leading to the office of Sir Arthur’s private secretary Miss Hilda Hanways. The main door is in the side wall on Walpole’s right. In the opposite wall on his left are the spacious windows. Everything is on an imposing scale, including an oblong table across the middle of the room, with fourteen leather upholstered chairs, six at each side and one at each end, pushed in all along it. The presidential chair is the central one next the cold fireplace (it is mid-July); and there is a telephone and a switchboard on the table within reach of it.

Sir Arthur has pulled it round and is making himself comfortable in it as he reads. At the end of the table nearest the window a silver tray, with coffee and milk for one person, indicates Sir Arthur’s unofficial seat. In the corner farthest from Walpole, on his right, is a writing bureau and chair for the secretary. In the corresponding corner on his left, an armchair. There is a bluebook lying, neglected and dusty, on a half empty shelf of the bookcase within reach of the Prime Minister’s seat.

Sir Arthur can hardly be much less than fifty; but his natural buoyancy makes him look younger. He has an orator’s voice of pleasant tone; and his manners are very genial. In oldish clothes he has the proper aristocratic air of being carelessly but well dressed, an easy feat for him, as he is so trimly built that any clothes would look well cut on him. On the whole, a very engaging personality.

He reads The Times until his secretary hurries in from her office, with her notebook and a sheaf of letters in her hand. Her age is unknown; but she is made up to pass as reasonably young and attractive. She looks capable; but she does not carry the burden of State affairs as easily as the Prime Minister. Both are worried; but with a difference. She is worried not only by an excess of business but a sense of responsibility. He is equally worried by the excess of business; but in him enjoyment of his position leaves no doubt in his mind as to his own entire adequacy to it.

HILDA. I hear you have been asking for me, Sir Arthur. I’m so sorry to be late; but really the streets are becoming quite impassable with the crowds of unemployed. I took a taxi; but it was no use: we were blocked by a procession; and I had to get out and push my way through. [She goes to her bureau].

SIR ARTHUR [rising] What on earth good do they think they can do themselves by crowding aimlessly about Westminster and the public offices?

HILDA. Thank Goodness the police wont let them into Downing Street. [She sits down]. They would be all over the doorstep.

SIR ARTHUR. It’s all so foolish–so ignorant, poor chaps! [He throws The Times on the table and moves to the end chair, where his coffee is]. They think because I’m Prime Minister I’m Divine Providence and can find jobs for them before trade revives. [He sits down and fidgets with his papers].

HILDA. Trafalgar Square’s full. The Horse Guards parade is full. The Mall is full all the way down to Marlborough House and Buckingham Palace.

SIR ARTHUR. They have no right to be there. Trafalgar Square is not a public place: it belongs to the Commissioner of Woods and Forests. The Horse Guards parade is reserved for the military. The Mall is a thoroughfare: anyone stopping there is guilty of obstruction. What are the police thinking of? Why dont they clear them out?

HILDA. I asked the policeman who got me through to the gates why they didnt. He said “We’re only too glad to have them where they cant break any windows, and where the mounted men can have a fair whack at the Hooligan Fringe when they get too obstreperous.”

SIR ARTHUR. Hooligan Fringe! He got that out of the papers. It only encourages them to write them up like that.

HILDA. Sir Broadfoot Basham has come over from Scotland Yard. He is talking to Lady Chavender.

SIR ARTHUR [rising and making for the telephone] Yes: I telephoned for him. He really must do something to stop these meetings. It was a mistake to make a man with a name like that Chief Commissioner of Police. People think him a trampling, bashing, brutal terrorist no matter how considerately the police behave. What we need is a thoroughly popular figure. [He takes up the telephone] Ask Sir Broadfoot Basham to come up.