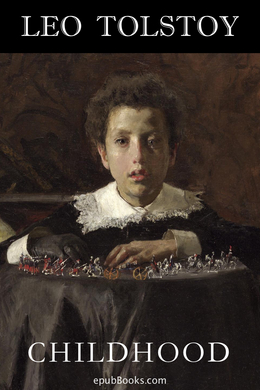 The artistic work of Leo Tolstoy has been described as “nothing less than one tremendous diary kept for over fifty years.” This particular “diary” begins with Tolstoy’s first published work, which was written when he was only 23. A semi-autobiographical work, it recounts two days in the childhood of 10-year-old Nikolai Irtenev, recreating vivid impressions of people, place and events with the exuberant perspective of a child enriched by the ironic retrospective understanding of an adult.

On the 12th of August, 18– (just three days after my tenth birthday, when I had been given such wonderful presents), I was awakened at seven o’clock in the morning by Karl Ivanitch slapping the wall close to my head with a fly-flap made of sugar paper and a stick. He did this so roughly that he hit the image of my patron saint suspended to the oaken back of my bed, and the dead fly fell down on my curls. I peeped out from under the coverlet, steadied the still shaking image with my hand, flicked the dead fly on to the floor, and gazed at Karl Ivanitch with sleepy, wrathful eyes. He, in a parti-coloured wadded dressing-gown fastened about the waist with a wide belt of the same material, a red knitted cap adorned with a tassel, and soft slippers of goat skin, went on walking round the walls and taking aim at, and slapping, flies.

“Suppose,” I thought to myself, “that I am only a small boy, yet why should he disturb me? Why does he not go killing flies around Woloda’s bed? No; Woloda is older than I, and I am the youngest of the family, so he torments me. That is what he thinks of all day long–how to tease me. He knows very well that he has woken me up and frightened me, but he pretends not to notice it. Disgusting brute! And his dressing-gown and cap and tassel too–they are all of them disgusting.”

While I was thus inwardly venting my wrath upon Karl Ivanitch, he had passed to his own bedstead, looked at his watch (which hung suspended in a little shoe sewn with bugles), and deposited the fly-flap on a nail, then, evidently in the most cheerful mood possible, he turned round to us.

“Get up, children! It is quite time, and your mother is already in the drawing-room,” he exclaimed in his strong German accent. Then he crossed over to me, sat down at my feet, and took his snuff-box out of his pocket. I pretended to be asleep. Karl Ivanitch sneezed, wiped his nose, flicked his fingers, and began amusing himself by teasing me and tickling my toes as he said with a smile, “Well, well, little lazy one!”

For all my dread of being tickled, I determined not to get out of bed or to answer him, but hid my head deeper in the pillow, kicked out with all my strength, and strained every nerve to keep from laughing.

“How kind he is, and how fond of us!” I thought to myself. “Yet to think that I could be hating him so just now!”

I felt angry, both with myself and with Karl Ivanitch, I wanted to laugh and to cry at the same time, for my nerves were all on edge.

“Leave me alone, Karl!” I exclaimed at length, with tears in my eyes, as I raised my head from beneath the bed-clothes.

Karl Ivanitch was taken aback. He left off tickling my feet, and asked me kindly what the matter was. Had I had a disagreeable dream? His good German face and the sympathy with which he sought to know the cause of my tears made them flow the faster. I felt conscience-stricken, and could not understand how, only a minute ago, I had been hating Karl, and thinking his dressing-gown and cap and tassel disgusting. On the contrary, they looked eminently lovable now. Even the tassel seemed another token of his goodness. I replied that I was crying because I had had a bad dream, and had seen Mamma dead and being buried. Of course it was a mere invention, since I did not remember having dreamt anything at all that night, but the truth was that Karl’s sympathy as he tried to comfort and reassure me had gradually made me believe that I HAD dreamt such a horrible dream, and so weep the more–though from a different cause to the one he imagined.

When Karl Ivanitch had left me, I sat up in bed and proceeded to draw my stockings over my little feet. The tears had quite dried now, yet the mournful thought of the invented dream was still haunting me a little. Presently Uncle [This term is often applied by children to old servants in Russia] Nicola came in–a neat little man who was always grave, methodical, and respectful, as well as a great friend of Karl’s. He brought with him our clothes and boots–at least, boots for Woloda, and for myself the old detestable, be-ribanded shoes. In his presence I felt ashamed to cry, and, moreover, the morning sun was shining so gaily through the window, and Woloda, standing at the washstand as he mimicked Maria Ivanovna (my sister’s governess), was laughing so loud and so long, that even the serious Nicola–a towel over his shoulder, the soap in one hand, and the basin in the other–could not help smiling as he said, “Will you please let me wash you, Vladimir Petrovitch?” I had cheered up completely.

“Are you nearly ready?” came Karl’s voice from the schoolroom. The tone of that voice sounded stern now, and had nothing in it of the kindness which had just touched me so much. In fact, in the schoolroom Karl was altogether a different man from what he was at other times. There he was the tutor.