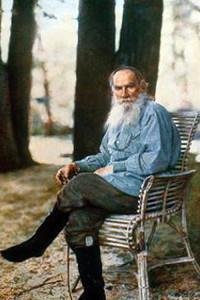 Leo Tolstoy was a Russian writer widely regarded as one of the greatest novelists of all time. His masterpieces, War and Peace and Anna Karenina, represent in the breadth and vivid depiction of 19th-century Russian life and attitudes - the peak of realist fiction. Tolstoy’s further talents as an essayist, dramatist, and educational reformer have made him the most influential member of the aristocratic Tolstoy family. His literal interpretation of the ethical teachings of Jesus, centring on the Sermon on the Mount, caused him in later life to become a fervent Christian anarchist and pacifist. His ideas on nonviolent resistance, expressed in such works as The Kingdom of God Is Within You, were to have a profound impact on such pivotal twentieth-century figures as Gandhi and Martin Luther King, Jr.

A magnificent drama of vengeance, infidelity, and retribution, Anna Karenina portrays the moving story of people whose emotions conflict with the domina...read more »

In the 1850s Tolstoy also began his literary career with an autobiographical trilogy: Childhood, Boyhood, and Youth. This, the second novel in the trilo...read more »

The artistic work of Leo Tolstoy has been described as “nothing less than one tremendous diary kept for over fifty years.” This particular “diary” begin...read more »

Olenin was a youth who had never completed his university course, never served anywhere (having only a nominal post in some government office or other),...read more »

Resurrection is the last of Tolstoy’s major novels. It tells the story of a nobleman’s attempt to redeem the suffering his youthful philandering inflict...read more »

The most famous—and perhaps greatest—novel of all time, Tolstoy’s War and Peace tells the story of five families struggling for survival during Napoleon...read more »