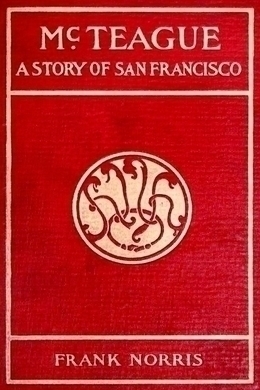 A Story of San Francisco

This graphic depiction of urban American life centers around McTeague, a dentist practicing in San Francisco at the turn of the 20th century. While at first content with his life and friendship with an ambitious man named Marcus, McTeague eventually courts and marries Trina, a parsimonious young woman who wins a large sum of money in a lottery. The greed of the majority of the characters in the novel creates a chain of events that lead to many painful, gruesome deaths. Norris’ work, so strikingly different from that of his contemporaries, is an admirable example of social realism, which provided America with a shocking reflection of its sordid sense of survival. From the opening description of San Francisco to McTeague’s final desperate flight far from his ‘Dental Parlors,’ this novel examines human greed in a way that still causes readers to pause and reflect over one hundred years later.

It was Sunday, and, according to his custom on that day, McTeague took his dinner at two in the afternoon at the car conductors’ coffee-joint on Polk Street. He had a thick gray soup; heavy, underdone meat, very hot, on a cold plate; two kinds of vegetables; and a sort of suet pudding, full of strong butter and sugar. On his way back to his office, one block above, he stopped at Joe Frenna’s saloon and bought a pitcher of steam beer. It was his habit to leave the pitcher there on his way to dinner.

Once in his office, or, as he called it on his signboard, “Dental Parlors,” he took off his coat and shoes, unbuttoned his vest, and, having crammed his little stove full of coke, lay back in his operating chair at the bay window, reading the paper, drinking his beer, and smoking his huge porcelain pipe while his food digested; crop-full, stupid, and warm. By and by, gorged with steam beer, and overcome by the heat of the room, the cheap tobacco, and the effects of his heavy meal, he dropped off to sleep. Late in the afternoon his canary bird, in its gilt cage just over his head, began to sing. He woke slowly, finished the rest of his beer–very flat and stale by this time–and taking down his concertina from the bookcase, where in week days it kept the company of seven volumes of “Allen’s Practical Dentist,” played upon it some half-dozen very mournful airs.

McTeague looked forward to these Sunday afternoons as a period of relaxation and enjoyment. He invariably spent them in the same fashion. These were his only pleasures–to eat, to smoke, to sleep, and to play upon his concertina.

The six lugubrious airs that he knew, always carried him back to the time when he was a car-boy at the Big Dipper Mine in Placer County, ten years before. He remembered the years he had spent there trundling the heavy cars of ore in and out of the tunnel under the direction of his father. For thirteen days of each fortnight his father was a steady, hard-working shift-boss of the mine. Every other Sunday he became an irresponsible animal, a beast, a brute, crazy with alcohol.

McTeague remembered his mother, too, who, with the help of the Chinaman, cooked for forty miners. She was an overworked drudge, fiery and energetic for all that, filled with the one idea of having her son rise in life and enter a profession. The chance had come at last when the father died, corroded with alcohol, collapsing in a few hours. Two or three years later a travelling dentist visited the mine and put up his tent near the bunk-house. He was more or less of a charlatan, but he fired Mrs. McTeague’s ambition, and young McTeague went away with him to learn his profession. He had learnt it after a fashion, mostly by watching the charlatan operate. He had read many of the necessary books, but he was too hopelessly stupid to get much benefit from them.

Then one day at San Francisco had come the news of his mother’s death; she had left him some money–not much, but enough to set him up in business; so he had cut loose from the charlatan and had opened his “Dental Parlors” on Polk Street, an “accommodation street” of small shops in the residence quarter of the town. Here he had slowly collected a clientele of butcher boys, shop girls, drug clerks, and car conductors. He made but few acquaintances. Polk Street called him the “Doctor” and spoke of his enormous strength. For McTeague was a young giant, carrying his huge shock of blond hair six feet three inches from the ground; moving his immense limbs, heavy with ropes of muscle, slowly, ponderously. His hands were enormous, red, and covered with a fell of stiff yellow hair; they were hard as wooden mallets, strong as vises, the hands of the old-time car-boy. Often he dispensed with forceps and extracted a refractory tooth with his thumb and finger. His head was square-cut, angular; the jaw salient, like that of the carnivora.

McTeague’s mind was as his body, heavy, slow to act, sluggish. Yet there was nothing vicious about the man. Altogether he suggested the draught horse, immensely strong, stupid, docile, obedient.