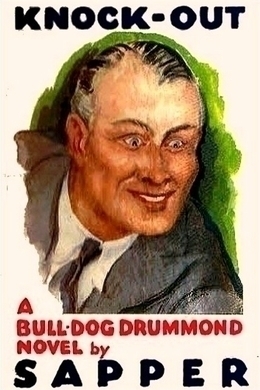 Ronald Standish, the charming, occasional detective who accepts cases when they take his fancy, receives a frantic phone call from a friend, who works for the Secret Service, asking for help. But when the line suddenly goes dead, Standish rushes round to his friend’s Hampstead abode, and is horrified to find him dead, with the receiver still in his hand and a horrific wound to his eye. When Standish teams up with Bulldog Drummond, the tangled political web surrounding this murder and the fearsome risks in pursuing the perpetrators are met head on.

It is difficult to say what it was that first caused Ronald Standish to adopt his particular profession. Indeed, it is doubtful whether it should be called a profession in view of the fact that he worked at it for love and only when the spirit moved him. Case after case he would turn down because they failed to interest him: then, apparently quite capriciously, he would take one up, vanish for a space, and then return as unobtrusively as he had departed to his ordinary life of sport.

That these sudden disappearances proved a little embarrassing to his friends is not to be wondered at. Captains of touring cricket elevens, secretaries of golf clubs, were wont to raise protesting hands to heaven when sometimes, at the last moment, Standish backed out of a match. But having played for his county at cricket, as well as being a genuine scratch man at golf, they forgave him and continued to include him in their teams.

Had he chosen to take up the art of detection seriously there is no doubt that he would have attained a world-wide reputation. He had an uncanny knack of sorting out the relevant from a mass of irrelevant facts, and refusing to be diverted by even the most ingenious red herring. But as he worked for fun and not because he had to, his ability was known to a comparatively small coterie only.

It was on a certain evening in March that, in stage parlance, the curtain rose and discovered him in his rooms in Clarges Street. A cheerful fire was burning in the grate: a whisky tantalus adorned the table. Outside the wind was howling fitfully down the street, drowning the distant roar of traffic in Piccadilly, and an occasional scurry of rain lashed against the window.

The owner of the rooms was standing with his back to the fire, an intent look of concentration on his face. Balanced on one finger was a driver, and it was evident that judgment was about to be pronounced. It came at last.

His audience uncoiled himself from an armchair. He was a lanky individual whose appearance was in striking contrast to the speaker. For Standish was, if anything, a little on the short side, and his lack of inches was accentuated by the abnormal depth of his chest. He was immensely powerful, but in a rough house suffered somewhat from lack of reach.

“Can anything be done, Ronald?” demanded Bill Leyton. “I’ve only just bought the blamed thing.”

“You might try having a bit of lead scooped out at the back, old boy, but I’m afraid the balance will still be all wrong.”

He put the club back in its bag, that profound look of awed mystery, without which no golfer can discuss an implement of the game, still present in his expression.

“Too heavy in the head,” he repeated solemnly. “And you tend to slice at the best of times, Bill. Damn! Who’s that? Answer it, old boy, will you, and if it’s Teddy wanting me to play tomorrow tell him I’ve gone to Paris for a month and have given up golf.”

The lanky being crossed the room in a couple of enormous strides and lifted the telephone receiver.

“Hullo!” he remarked. “Yes–these are Mr Standish’s rooms. Who is speaking?”

He listened for a moment, and then covering the mouthpiece with his hand, turned round.

“Bloke by the name of Sanderson,” he muttered. “Wants to speak to you urgently.”

Standish nodded, and took the receiver from the other’s hand.

His voice rose in a crescendo and Leyton stared at him in amazement.

“Is that exchange?” he cried. “Look here, I’ve just been rung up by Hampstead 0024, and I’ve been cut off in the middle. Could you find out about it?”

He waited, one foot tapping feverishly on the floor.

“You can’t get any reply, and the receiver is still off? Thank you.”

He turned to Leyton.

“It’s possible that he was called away; I’ll hold on a bit longer.”

But a minute later he gave it up and his face was very grave. “Something has happened, Bill; I’ll have to go to Hampstead. Either he’s ill, or…”

He left the sentence unfinished, and Leyton looked at him curiously.

“What was it you heard?” he asked.

“He had just asked me to go up and see him at once. The last words he said were–‘I’ve got…’ He was beginning a new sentence, and he never completed it. I heard a noise that sounded like a hiss; then came a clatter which might have been caused by the receiver of his machine dropping on to his desk. And there’s been nothing since.”

He crossed to a small cupboard in the corner, and Bill Leyton raised his eyebrows. He knew the contents of that cupboard, and things must be serious if Standish proposed utilising them.