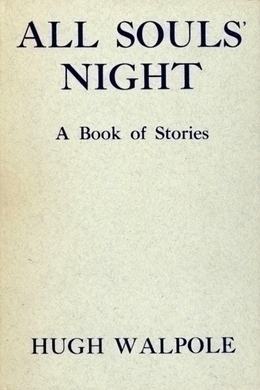 A Book of Stories

Walpole’s third collection of short fiction, sixteen stories, including several of his best supernatural tales. Walpole’s two strongest stories in the genre are Tarnhelm; or, The Death of My Uncle Robert, a strangely moving and poignant werewolf tale told from the point of view of a sensitive little boy; and The Silver Mask, the story of a middle-aged woman’s fatal obsession with a sinister and beautiful young man. The Silver Mask is in fact, a masterpiece, a classic example of how a tale can be truly terrible and ghostly with no ghost and only the wispiest hint of the supernatural. Contents: The Whistle, The Silver Mask, The Staircase, A Carnation for an Old Man, Tarnhelm; or, The Death of my Uncle Robert, Mr. Oddy, Seashore Macabre. A Moment’s Experience, Lilac, The Oldest Talland, The Little Ghost, Mrs. Lunt, Sentimental but True, Portrait in Shadow, The Snow, The Ruby Glass, Spanish Dusk

Mrs. Penwin gave one of her nervous little screams when she saw the dog.

‘Oh, Charlie!’ she cried. ‘You surely haven’t bought it!’ and her little brow, that she tried so fiercely to keep smooth, puckered into its customary little gathering of wrinkles.

The dog, taking an instant dislike to her, sank his head between his shoulders. He was an Alsatian.

‘Well … ‘ said Charlie, smiling nervously. He knew that his impulsiveness had led him once more astray. ‘Only the other evening you were saying that you’d like a dog.’

‘Yes, but NOT an Alsatian! You KNOW what Alsatians are. We read about them in the paper every day. They are simply not to be trusted. I’M sure he looks as vicious as anything. And what about Mopsa?’

‘Oh, Mopsa … ‘ Charlie hesitated. ‘He’ll be all right. You see, Sibyl, it was charity really. The Sillons are going to London as you know. They simply can’t take him. It wouldn’t be fair. They’ve found it difficult enough in Edinburgh as it is.’

‘I’m sure they are simply getting rid of him because he’s vicious.’

‘No, Maude Sillon assured me. He’s like a lamb–’

‘You know that you’ve been wanting a companion for Mopsa–’

‘A companion for Mopsa! That’s good!’ Sibyl laughed her shrill little laugh that was always just out of tune.

‘Well, we’ll try him. We can easily get rid of him. And Blake shall look after him.’

‘Blake!’ She was scornful. She detested Blake, but he was too good a chauffeur to lose.

‘And he’s most awfully handsome. You can’t deny it.’

She looked. Yes, he was most awfully handsome. He had lain down, his head on his paws, staring in front of him, quite motionless. He seemed to be waiting ironically until he should be given his next command. The power in those muscles, moulded under the skin, must be terrific. His long wolf ears lay flat. His colour was lovely, here silver-grey, there faintly amber. Yes, he was a magnificent dog. A little like Blake in his strength, silence, sulkiness.

She turned again to the note that she was writing.

‘We’ll try him if you like. Anyway there are no children about. It’s Blake’s responsibility–and the moment he’s tiresome he goes.’

Charlie was relieved. It hadn’t been so bad after all.

‘Oh, Blake says he doesn’t mind. In fact he seemed to take to the dog at once. I’ll call him.’

He went to the double windows that opened into the garden and called: ‘Blake! Blake!’

Blake came. He was still in his chauffeur’s uniform, having just driven his master and the dog in from Keswick. He was a very large man, very fair in colouring, plainly of great strength. His expression was absolutely English in its complete absence of curiosity, its certainty that it knew the best about everything, its suspicion, its determination not to be taken in by anybody, and its latent kindliness. He had very blue eyes and was clean-shaven; his cap was in his hand, and his hair, which was fair almost to whiteness, lay roughly across his forehead. He was not especially neat but of a quite shining cleanliness.

The dog got up and moved towards him. Both the Penwins were short and slight; they looked now rather absurdly small beside the man and the dog.

‘Look here, Blake,’ said Charlie Penwin, speaking with much authority, ‘Mrs. Penwin is nervous about the dog. He’s your responsibility, mind, and if there’s the slightest bit of trouble, he goes. You understand that?’

‘That’s a ridiculous thing to say,’ remarked Mrs. Penwin sharply, looking up from her note. ‘How can you be sure, Blake? You know how uncertain Alsatians are. I don’t know what Mr. Penwin was thinking about.’

Blake said nothing. Once again and for the hundred-thousandth time both the Penwins wished that they could pierce him with needles. It was quite terrible the way that Blake didn’t speak when expected to, but then he was so wonderful a chauffeur, so good a driver, so excellent a mechanic, so honest–and Clara, his wife, was an admirable cook.

‘You’d better take the dog with you now, Blake. What’s his name?’

‘Adam! What a foolish name for a dog! Now don’t disturb Clara with him, Blake. Clara hates to have her kitchen messed up.’

Blake, without a word, turned and went, the dog following closely at his heels.

Yes, Clara hated to have her kitchen messed up. She was standing now, her sleeves rolled up, her plump hands and wrists covered with dough. Mopsa, the Sealyham, sat at her side, his eyes, glistening with greed, raised to those doughy arms. But at sight of the Alsatian he turned instantly and flew at his throat. He was a dog who prided himself on fighting instantly every other dog. With human beings he was mild and indifferently amiable. Children could do what they would with him. He was exceedingly conceited, and cared for no one but himself.