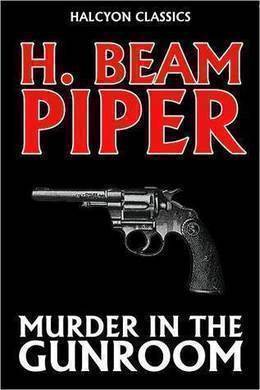 Murder in the Gunroom

Murder in the Gunroom features a detective whose expertise in antique guns makes him the perfect candidate to crack the case of a collector felled by one of his own weapons. The Lane Fleming collection of early pistols and revolvers was one of the best in the country. When Fleming was found dead on the floor of his locked gunroom, a Confederate-made Colt-type percussion .36 revolver in his hand, the coroner’s verdict was “death by accident.” But Gladys Fleming had her doubts. Enough at any rate to engage Colonel Jefferson Davis Rand–better known just as Jeff–private detective and a pistol-collector himself, to catalogue, appraise, and negotiate the sale of her late husband’s collection. There were a number of people who had wanted the collection. The question was: had anyone wanted it badly enough to kill Fleming? And if so, how had he done it? Here is a mystery, told against the fascinating background of old guns and gun-collecting, which is rapid-fire without being hysterical, exciting without losing its contact with reason, and which introduces a personable and intelligent new private detective. It is a story that will keep your nerves on a hair trigger even if you don’t know the difference between a cased pair of Paterson .34’s and a Texas .40 with a ramming-lever.

It was hard to judge Jeff Rand’s age from his appearance; he was certainly over thirty and considerably under fifty. He looked hard and fit, like a man who could be a serviceable friend or a particularly unpleasant enemy. Women instinctively suspected that he would make a most satisfying lover. One might have taken him for a successful lawyer (he had studied law, years ago), or a military officer in mufti (he still had a Reserve colonelcy, and used the title occasionally, to impress people who he thought needed impressing), or a prosperous businessman, as he usually thought of himself. Most of all, he looked like King Charles II of England anachronistically clad in a Brooks Brothers suit.

At the moment, he was looking rather like King Charles II being bothered by one of his mistresses who wanted a peerage for her husband.

“But, Mrs. Fleming,” he was expostulating. “There surely must be somebody else…. After all, you’ll have to admit that this isn’t the sort of work this agency handles.”

The would-be client released a series of smoke-rings and watched them float up toward the air-outlet at the office ceiling. It spoke well for Rand’s ability to subordinate esthetic to business considerations that he was trying to give her a courteous and humane brush-off. She made even the Petty and Varga girls seem credible. Her color-scheme was blue and gold; blue eyes, and a blue tailored outfit that would have looked severe on a less curvate figure, and a charmingly absurd little blue hat perched on a mass of golden hair. If Rand had been Charles II, she could have walked out of there with a duchess’s coronet, and Nell Gwyn would have been back selling oranges.

“Why isn’t it?” she countered. “Your door’s marked Tri-State Detective Agency, Jefferson Davis Rand, Investigation and Protection. Well, I want to know how much the collection’s worth, and who’ll pay the closest to it. That’s investigation, isn’t it? And I want protection from being swindled. And don’t tell me you can’t do it. You’re a pistol-collector, yourself; you have one of the best small collections in the state. And you’re a recognized authority on early pistols; I’ve read some of your articles in the Rifleman. If you can’t handle this, I don’t know who can.”

Rand’s frown deepened. He wondered how much Gladys Fleming knew about the principles of General Semantics. Even if she didn’t know anything, she was still edging him into an untenable position. He hastily shifted from the attempt to identify his business with the label, “private detective agency.”

“Well, here, Mrs. Fleming,” he explained. “My business, including armed-guard and protected-delivery service, and general investigation and protection work, requires some personal supervision, but none of it demands my exclusive attention. Now, if you wanted some routine investigation made, I could turn it over to my staff, maybe put two or three men to work on it. But there’s nothing about this business of yours that I could delegate to anybody; I’d have to do it all myself, at the expense of neglecting the rest of my business. Now, I could do what you want done, but it would cost you three or four times what you’d gain by retaining me.”

“Well, let me decide that, Colonel,” she replied. “How much would you have to have?”

“Well, this collection of your late husband’s consists of some twenty-five hundred pistols and revolvers, all types and periods,” Rand said. “You want me to catalogue it, appraise each item, issue lists, and negotiate with prospective buyers. The cataloguing and appraisal alone would take from a week to ten days, and it would be a couple more weeks until a satisfactory sale could be arranged. Why, say five thousand dollars; a thousand as a retainer and the rest on completion.”

That, he thought, would settle that. He was expecting an indignant outcry, and hardened his heart, like Pharaoh. Instead, Gladys Fleming nodded equably.

“That seems reasonable enough, Colonel Rand, considering that you’d have to be staying with us at Rosemont, away from your office,” she agreed. “I’ll give you a check for the thousand now, with a letter of authorization.”

Rand nodded in return. Being thoroughly conscious of the fact that he could only know a thin film of the events on the surface of any situation, he was not easily surprised.

“Very well,” he said. “You’ve hired an arms-expert. I’ll be in Rosemont some time tomorrow afternoon. Now, who are these prospective purchasers you mentioned, and just how prospective, in terms of United States currency, are they?”

“Well, for one, there’s Arnold Rivers; he’s offering ten thousand for the collection. I suppose you know of him; he has an antique-arms business at Rosemont.”

“I’ve done some business with him,” Rand admitted. “Who else?”