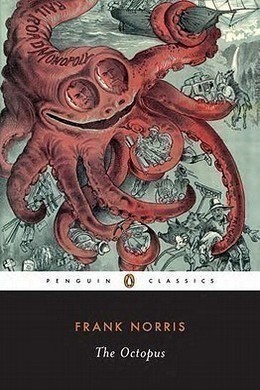 A Story of California

The Octopus: A Story of California is a novel about wheat growers who are in conflict with a railroad company during late 19th century California. The railroad company, controlling the local newspaper, state legislature and the land prove to be a tough force for the local wheat growers to fight against. The Octopus is highly recommended for those who are interested in novels taking place in early California and also those who enjoy the writings of author Frank Norris.

Just after passing Caraher’s saloon, on the County Road that ran south from Bonneville, and that divided the Broderson ranch from that of Los Muertos, Presley was suddenly aware of the faint and prolonged blowing of a steam whistle that he knew must come from the railroad shops near the depot at Bonneville. In starting out from the ranch house that morning, he had forgotten his watch, and was now perplexed to know whether the whistle was blowing for twelve or for one o’clock. He hoped the former. Early that morning he had decided to make a long excursion through the neighbouring country, partly on foot and partly on his bicycle, and now noon was come already, and as yet he had hardly started. As he was leaving the house after breakfast, Mrs. Derrick had asked him to go for the mail at Bonneville, and he had not been able to refuse.

He took a firmer hold of the cork grips of his handlebars–the road being in a wretched condition after the recent hauling of the crop–and quickened his pace. He told himself that, no matter what the time was, he would not stop for luncheon at the ranch house, but would push on to Guadalajara and have a Spanish dinner at Solotari’s, as he had originally planned.

There had not been much of a crop to haul that year. Half of the wheat on the Broderson ranch had failed entirely, and Derrick himself had hardly raised more than enough to supply seed for the winter’s sowing. But such little hauling as there had been had reduced the roads thereabouts to a lamentable condition, and, during the dry season of the past few months, the layer of dust had deepened and thickened to such an extent that more than once Presley was obliged to dismount and trudge along on foot, pushing his bicycle in front of him.

It was the last half of September, the very end of the dry season, and all Tulare County, all the vast reaches of the San Joaquin Valley–in fact all South Central California, was bone dry, parched, and baked and crisped after four months of cloudless weather, when the day seemed always at noon, and the sun blazed white hot over the valley from the Coast Range in the west to the foothills of the Sierras in the east.

As Presley drew near to the point where what was known as the Lower Road struck off through the Rancho de Los Muertos, leading on to Guadalajara, he came upon one of the county watering-tanks, a great, iron-hooped tower of wood, straddling clumsily on its four uprights by the roadside. Since the day of its completion, the storekeepers and retailers of Bonneville had painted their advertisements upon it. It was a landmark. In that reach of level fields, the white letters upon it could be read for miles. A watering-trough stood near by, and, as he was very thirsty, Presley resolved to stop for a moment to get a drink.

He drew abreast of the tank and halted there, leaning his bicycle against the fence. A couple of men in white overalls were repainting the surface of the tank, seated on swinging platforms that hung by hooks from the roof. They were painting a sign–an advertisement. It was all but finished and read, “S. Behrman, Real Estate, Mortgages, Main Street, Bonneville, Opposite the Post Office.” On the horse-trough that stood in the shadow of the tank was another freshly painted inscription: “S. Behrman Has Something To Say To You.”

As Presley straightened up after drinking from the faucet at one end of the horse-trough, the watering-cart itself laboured into view around the turn of the Lower Road. Two mules and two horses, white with dust, strained leisurely in the traces, moving at a snail’s pace, their limp ears marking the time; while perched high upon the seat, under a yellow cotton wagon umbrella, Presley recognised Hooven, one of Derrick’s tenants, a German, whom every one called “Bismarck,” an excitable little man with a perpetual grievance and an endless flow of broken English.

“Hello, Bismarck,” said Presley, as Hooven brought his team to a standstill by the tank, preparatory to refilling.

“Yoost der men I look for, Mist’r Praicely,” cried the other, twisting the reins around the brake. “Yoost one minute, you wait, hey? I wanta talk mit you.”

Presley was impatient to be on his way again. A little more time wasted, and the day would be lost. He had nothing to do with the management of the ranch, and if Hooven wanted any advice from him, it was so much breath wasted. These uncouth brutes of farmhands and petty ranchers, grimed with the soil they worked upon, were odious to him beyond words. Never could he feel in sympathy with them, nor with their lives, their ways, their marriages, deaths, bickerings, and all the monotonous round of their sordid existence.

“Well, you must be quick about it, Bismarck,” he answered sharply. “I’m late for dinner, as it is.”