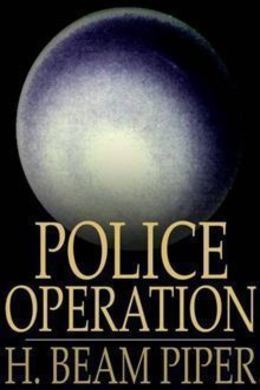 Part of H. Beam Piper’s much-lauded Paratime series, Police Operation takes place in the distant future. This story focuses specifically on the Paratime police, an elite organization that is charged with the task of protecting the top-secret technology that allows Earth’s denizens to travel between parallel universes to trade for goods and resources.

John Strawmyer stood, an irate figure in faded overalls and sweat-whitened black shirt, apart from the others, his back to the weathered farm-buildings and the line of yellowing woods and the cirrus-streaked blue October sky. He thrust out a work-gnarled hand accusingly.

“That there heifer was worth two hund’rd, two hund’rd an’ fifty dollars!” he clamored. “An’ that there dog was just like one uh the fam’ly; An’ now look at’m! I don’t like t’ use profane language, but you’ns gotta do some’n about this!”

Steve Parker, the district game protector, aimed his Leica at the carcass of the dog and snapped the shutter. “We’re doing something about it,” he said shortly. Then he stepped ten feet to the left and edged around the mangled heifer, choosing an angle for his camera shot.

The two men in the gray whipcords of the State police, seeing that Parker was through with the dog, moved in and squatted to examine it. The one with the triple chevrons on his sleeves took it by both forefeet and flipped it over on its back. It had been a big brute, of nondescript breed, with a rough black-and-brown coat. Something had clawed it deeply about the head, its throat was slashed transversely several times, and it had been disemboweled by a single slash that had opened its belly from breastbone to tail. They looked at it carefully, and then went to stand beside Parker while he photographed the dead heifer. Like the dog, it had been talon-raked on either side of the head, and its throat had been slashed deeply several times. In addition, flesh had been torn from one flank in great strips.

“I can’t kill a bear outa season, no!” Strawmyer continued his plaint. “But a bear comes an’ kills my stock an’ my dog; that there’s all right! That’s the kinda deal a farmer always gits, in this state! I don’t like t’ use profane language–”

“Then don’t!” Parker barked at him, impatiently. “Don’t use any kind of language. Just put in your claim and shut up!” He turned to the men in whipcords and gray Stetsons. “You boys seen everything?” he asked. “Then let’s go.”

They walked briskly back to the barnyard, Strawmyer following them, still vociferating about the wrongs of the farmer at the hands of a cynical and corrupt State government. They climbed into the State police car, the sergeant and the private in front and Parker into the rear, laying his camera on the seat beside a Winchester carbine.

“Weren’t you pretty short with that fellow, back there, Steve?” the sergeant asked as the private started the car.

“Not too short. ‘I don’t like t’ use profane language’,” Parker mimicked the bereaved heifer owner, and then he went on to specify: “I’m morally certain that he’s shot at least four illegal deer in the last year. When and if I ever get anything on him, he’s going to be sorrier for himself then he is now.”

“They’re the characters that always beef their heads off,” the sergeant agreed. “You think that whatever did this was the same as the others?”

“Yes. The dog must have jumped it while it was eating at the heifer. Same superficial scratches about the head, and deep cuts on the throat or belly. The bigger the animal, the farther front the big slashes occur. Evidently something grabs them by the head with front claws, and slashes with hind claws; that’s why I think it’s a bobcat.”

“You know,” the private said, “I saw a lot of wounds like that during the war. My outfit landed on Mindanao, where the guerrillas had been active. And this looks like bolo-work to me.”

“The surplus-stores are full of machetes and jungle knives,” the sergeant considered. “I think I’ll call up Doc Winters, at the County Hospital, and see if all his squirrel-fodder is present and accounted for.”

“But most of the livestock was eaten at, like the heifer,” Parker objected.

“By definition, nuts have abnormal tastes,” the sergeant replied. “Or the eating might have been done later, by foxes.”