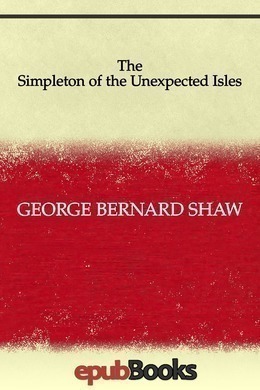 The Simpleton of the Unexpected Isles

The emigration office at a tropical port in the British Empire. The office is an annex of the harbor and customs sheds on one side and of the railway station on the other. Placards direct passengers TO THE CUSTOMS and TO THE TRAINS through the open doors right and left respectively. The emigration officer, an unsatisfactory young man of unhealthy habits, is sitting writing at his table in the middle of the room. His clerk is at a standing desk against the wall on the customs side. The officer wears tropical clothes, neither too tidy nor too clean. The clerk is in a shabby dark lounge suit…a scream cut short by a splash. The E. O. sits down at the table and attacks the remains of the feast ravenously.

The lawn of a stately house on the north coast of a tropical island in the Pacific commands a fine view of the ocean and of a breakwater enclosing a harbor, large enough to accommodate a fleet, but at present shipless. The western face of the house is reached by a terrace and a flight of steps. The steps lead down to a crescent formed by two curved stone seats separated by a patch of sward surrounding a circular well with a low marble parapet. This parapet, like the stone seats, has silk cushions scattered about it.

Behind the crescent the lawn is banked to a higher level and becomes a flower garden, sheltered from the wind by shrubberies. To the west of the flower garden the lawn falls away to the sea, but not to sea level, all that is visible of the port being the top of the lighthouse. There are trees enough in all directions to provide shade everywhere.

However, the raised flower garden is the centre of interest; for in it are four shrines marking the corners of a square. In the two foremost shrines two girl-goddesses sit crosslegged. In the two further ones two youthful gods are sitting in the same fashion. The ages of the four appear to be between 17 and 20. They are magically beautiful in their Indian dresses, softly brilliant, making the tropical flowers of the garden seem almost crude beside them. Their expressions are intent, grave, and inscrutable. They face south with their backs to the sea. The goddess to the east has raven black hair, a swarthy skin, and robes of a thousand shades of deep carnation, in contrast to the younger one on her right, who is a ravishing blonde in a diaphanous white and gold sari. There is a parallel contrast between the two youths, the one on the west being the younger and more delicate, and the one on his left older and more powerfully framed.

The four figures give the garden a hieratic aspect which has its effect on a young English clergyman, who wanders into the grounds at the north west corner, looking curiously and apprehensively about him with the air of a stranger who is trespassing. When he catches sight of the four figures he starts nervously and whips off his hat; then approaches them on tiptoe. He has a baby complexion, and a childish expression, credulous and disarmingly propitiatory. His age is at most 24.

Down the steps at this moment comes Pra, about twenty years older than when we saw him last, but splendidly preserved. His approach is dignified and even courteous, though not warmly so. He evidently wants to know what the stranger is doing in his garden.

THE CLERGYMAN [nervously, hat in hand] I beg your pardon. I fear I am trespassing. I am a stranger here; and I could not find a road up from the beach. I thought I might cut across through your grounds. [Indicating the figures] But I assure you I had no idea I was intruding on consecrated ground.

PRA. You are not on consecrated ground, except in so far as all ground is consecrated.

THE CLERGYMAN. Oh, excuse me. I thought–those idols–

THE CLERGYMAN. No, of course not idols. I meant those gods and goddesses–

PRA. They are very beautiful, are they not? [He speaks without awe or enthusiasm, with a touch of pity for the parson and weariness on his own part].

THE CLERGYMAN. They are most beautiful. Quite marvellous even to me, an English clergyman. I can hardly wonder at your worshipping them, though of course you shouldnt.

PRA. Beauty is worshipful, within limits. When you have worshipped your fill may I shew you the shortest way out? It is through the house. Where do you wish to go, by the way?

THE CLERGYMAN. I dont know. I am lost.

THE CLERGYMAN. Yes, quite lost. I dont know where I am. I mean I dont even know what country I am in.

PRA. You are in the Unexpected Isles, a Crown Colony of the British Empire.

THE CLERGYMAN. Do you mean the isles that came up out of the sea when I was a baby.

PRA. Yes. [Pointing to the breakwater] That is the harbor of the port of Good Adventure.

THE CLERGYMAN. They put me on shore there.

PRA. Who put you on shore?

THE CLERGYMAN. The pirates.

THE CLERGYMAN. Yes. I was their chaplain.

PRA. You were their–! [He turns to the house and calls] Prola. Prola.

PROLA’S VOICE. Yes. What is it?

Prola comes down the steps. She, like Pra, is twenty years older; but the years have only made her beauty more impressive.

THE CLERGYMAN [gaping at her in an undisguised awe and admiration] Oh dear! Is this the lady of the house?

PROLA [coming past Pra to the Clergyman] Who is this gentleman?

PRA. He does not seem to know. I think he has escaped from the asylum.