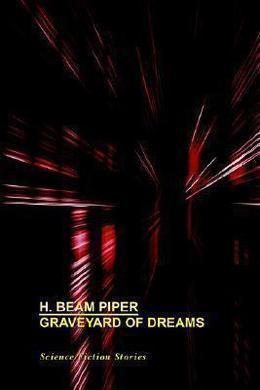 The Terro-Human series continues as the Federation begins to crumble. How do you arrange to colonize a planet whose inhabitants speak gibberish yet still communicate, in ways humans can’t begin to fathom? How can you discipline a race of workers who are sure their managers are controlled by their products and know the end of the world is near? And what happens when a planet dependent on salvaging abandoned hardware runs out of things to scavenge? H. Beam Piper takes his elaborate future-history of man among the stars in a new direction with Naudsonce, Oomphel in the Sky, and the novel-length Graveyard of Dreams.

Standing at the armor-glass front of the observation deck and watching the mountains rise and grow on the horizon, Conn Maxwell gripped the metal hand-rail with painful intensity, as though trying to hold back the airship by force. Thirty minutes–twenty-six and a fraction of the Terran minutes he had become accustomed to–until he’d have to face it.

Then, realizing that he never, in his own thoughts, addressed himself as “sir,” he turned.

“I beg your pardon?”

It was the first officer, wearing a Terran Federation Space Navy uniform of forty years, or about ten regulation-changes, ago. That was the sort of thing he had taken for granted before he had gone away. Now he was noticing it everywhere.

“Thirty minutes out of Litchfield, sir,” the ship’s officer repeated. “You’ll go off by the midship gangway on the starboard side.”

The first mate held out the clipboard he was carrying. “Would you mind checking over this, Mr. Maxwell? Your baggage list.”

“Certainly.” He glanced at the slip of paper. Valises, eighteen and twenty-five kilos, two; trunks, seventy-five and seventy kilos, two; microbook case, one-fifty kilos, one. The last item fanned up a little flicker of anger in him, not at any person, even himself, but at the situation in which he found himself and the futility of the whole thing.

“Yes, that’s everything. I have no hand-luggage, just this stuff.”

He noticed that this was the only baggage list under the clip; the other papers were all freight and express manifests. “Not many passengers left aboard, are there?”

“You’re the only one in first-class, sir,” the mate replied. “About forty farm-laborers on the lower deck. Everybody else got off at the other stops. Litchfield’s the end of the run. You know anything about the place?”

“I was born there. I’ve been away at school for the last five years.”

“Terra. University of Montevideo.” Once Conn would have said it almost boastfully.

The mate gave him a quick look of surprised respect, then grinned and nodded. “Of course; I should have known. You’re Rodney Maxwell’s son, aren’t you? Your father’s one of our regular freight shippers. Been sending out a lot of stuff lately.” He looked as though he would have liked to continue the conversation, but said: “Sorry, I’ve got to go. Lot of things to attend to before landing.” He touched the visor of his cap and turned away.

The mountains were closer when Conn looked forward again, and he glanced down. Five years and two space voyages ago, seen from the afterdeck of this ship or one of her sisters, the woods had been green with new foliage, and the wine-melon fields had been in pink blossom. He tried to picture the scene sliding away below instead of drawing in toward him, as though to force himself back to a moment of the irretrievable past.

The woods were autumn-tinted now and the fields were bare and brown.

They had gotten the crop in early this year, for the fields had all been harvested. Those workers below must be going out for the wine-pressing. That extra hands were needed for that meant a big crop, and yet it seemed that less land was under cultivation than when he had gone away. He could see squares of low brush among the new forests that had grown up in the last forty years, and the few stands of original timber looked like hills above the second growth. Those trees had been standing when the planet had been colonized.

That had been two hundred years ago, at the middle of the Seventh Century, Atomic Era. The name of the planet–Poictesme–told that: the Surromanticist Movement, when the critics and professors were rediscovering James Branch Cabell.