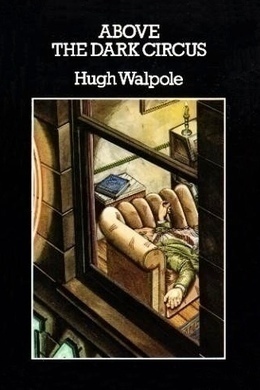 Above the Dark Circus

Huge Walpole’s thrilling adventure novel of the 1920s revolves around Piccadily Circus. Richard Gunn is an ex-soldier in trouble after the end of the Great War. Jobless and starving in Piccadilly Circus, he encounters his nemesis, Leroy Pengelly. From this encounter the secrets of their shared past start to unravel… A novel which combines elements of the horror and supernatural - at which Walpole was so skilled - with the puzzle element of the whodunnit - all wrapped up in one unsettling and uncanny whole.

I am aware, I fancy, of most of the dangers of narrative in the first person, but it appears to me that there is no other possible method for this particular story.

Swiftly following though the incidents of it were, and involving a number of persons besides myself in very definite dangers, it is not the incidents that seem to me now, after nearly five years’ interval, to be of importance, but rather the implications that lay behind them, and especially the implications in Osmund’s purpose.

The chief peril, I suppose, that lurks behind narrative in the first person is that of incredulity. How can anyone remember so clearly and repeat so accurately these conversations? Yes, but one doesn’t either remember clearly or repeat accurately. One gives the gist of the thing, the spirit of it rather than the letter. Then, further, as to the scenes that one did not oneself witness. Well, in this present adventure, there is, as will afterwards be clear, only one scene at which I was not myself present, and here my informant is so close to myself that it makes no matter.

For the rest I, and I alone, can give you, as I think, the POINT of it all, for I, and I alone, should see it from every angle–yes, from that dizzy catastrophe (for it WAS a catastrophe) under the guttering candles, from that bizarre procession with the loathsome Pengelly, his hat over his eyes, held up under each arm, to that last scene up among the chimney-pots.

This is a pretty portentous beginning. I hadn’t intended to start seriously at all, but quite simply with my name and address, so to speak.

My name is Richard Gunn. I was born in the town of Totnes, April 4, 1884. When this adventure began I was standing, naked to the world, save for one half-crown, about five o’clock on a December afternoon, in Piccadilly Circus, wondering what would happen next.

And here I hope you will excuse me for vagueness in the matter of the year. Indeed, I will ask your permission to change the names, not only of persons, but of buildings and addresses in general. Not that it matters very much. There is no one left who can object very strongly, but I like to allow myself that amount of licence. You can trace the places for yourself, if you like. They are all, as you will see, within a stone’s throw from one another. The Circus dominated us first and last and all the time, played perhaps a bigger part in the adventure than did any of us individually. I don’t know. That’s for you afterwards to decide.

As to the year, it was after the war and after Eros was removed from its pedestal. Where Eros HAD been, I remember, was the point at which I was especially staring as I stood on the edge of the kerb, wondering what would happen next.

I had several alternatives in my mind–one was suicide, another robbery, another something not very far from murder. And yet I was not in myself in any way a desperate character–not, probably, desperate enough. I never have been. I was only very cold, very hungry and very hopeless.

My position was in no ways a peculiar one at that time. Many another soldier shared it. Before the war I had held for many years a job as land agent in my own county of Devon. Joining up in 1914 I had trusted to a six months’ conflict and the resumption of my job again, but Harry Carden, my employer and close personal friend, was dead, and his estate sold, long before the fighting was over. I had saved during the war a sufficiency, and in 1918 had invested it, with a brother-officer, in a pair of charabancs. The charabancs failed–we had not perhaps precisely the right talent for charabancs. I was, after that, secretary to an impatient peeress, secretary to a night club, companion to a deaf and dumb gentleman, assistant in Mr. Swell-in-the-head’s Stores and seller- in-ordinary for Fletcher’s Patent Fountain Pens. Whatever I touched failed; whatever touched me crumbled to ruin–so here I was on this December afternoon in the year such-and-such, with exactly one half-crown in my pocket, no food in my belly and the bitterest cold in my entrails.

I had, I fancy, no grudge against anybody or anything, not even myself. I did not find that any of this was my own fault or anyone else’s. I blamed neither God nor my fellow-men.

I only wondered what I would do with my last half-crown. Anyone who has been acutely hungry knows how odd a state of fantasy that condition provides. I was not quite sane, nor did I see the rest of the world quite sanely as I stood at that particular moment, staring at the scaffolding that, guarding the fine new Tube-To-Be, pierced upwards into the London pea-soup sky and the shadowy casual flakes of falling snow.