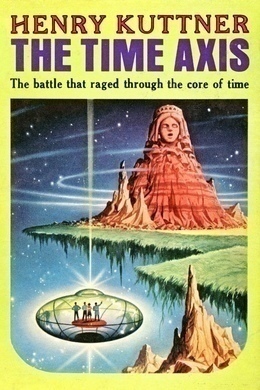 The battle that raged through the core of time

Called to the end of time by a being they knew only as The Face of Ea, four adventurers from the twentieth century faced a power that not even the super-science of that era could meet – the nekron, negative matter, negative force, ultimate destruction for everything it touched. It seemed hopeless to expect them to win this battle for the fate of the universe – but between them they had a power they themselves could not suspect.

The whole thing never happened and I can prove it – now. But Ira De Kalb made me wait a billion years to write the story.

So we start with a paradox. But the strangest thing of all is that there are no real paradoxes involved, not one. This is a record of logic. Not human logic, of course, not the logic of this time or this space.

I don’t know if men will ever journey again, as we journeyed, to that intersection of latitude and longitude where a shell hangs forever – forever and yet not forever, in space and out of space – on the axis stretching through time from beginning to end.

From the dawn of the nebulae to the twilight of absolute entropy, when the framework of the cosmos has broken down into chaos, still that axis will stretch from dawn to dusk, from beginning to end. For as this world spins on an axis through space, so the sphere of time spins on its own axis.

I never understood the ultimate answer. That was beyond me. It took the combined skills of three great civilizations far apart in time to frame that godlike concept in which the tangible universe itself was only a single factor.

And even then it was not enough. It took the Face of Ea – which I shall never be able to describe fully.

Was there? Will be? Maybe? I can’t tell now. But of all stories in the world, this more than any needs a pattern.

Since the beginning is in the past, before men as such existed at all, the only starting place I know is a temporal and personal one, when I was drawn into the experiment. Now that I know a little more about the nature of time it seems clearer to me that past, present and future were all stepping stones, arranged out of sequence. The first step took place two months ago.

Now this is the way it used to be.

For me, the Big Ride. You start when you’re born. You climb on the toboggan and then you’re off. But you can only have the one ride. No use telling the ticket-taker you want to go again. They shovel you under at the end of the slope and there’s a new lot of passengers waiting. You’ve had your three-score and ten. And it’s over.

I’d ridden the toboggan for thirty-five years. Jeremy Cortland, Jerry Cortland of the Denver Post, the Frisco Call-Bulletin, PM, AP, Time, Collzers – sometimes staff, sometimes roving assignments. I leaned out of the toboggan and plucked fruit from the orchards as I sped by. Strange fruit, sometimes. Generic term is News. And that covers a lot of territory.

There was a splinter in the toboggan’s seat. I had on red flannel underwear. I had a nervous tic. I couldn’t sit still. I kept reaching out, grabbing. Years of it, of by-lines that said “cabled by Jeremy Cortland.”

Russia, China, war coverage, Piccard’s bathyscaphe, the supersonic and altostratosphere planes, the Russian earth-borer gadget, the Big Eye at Palomar – the coal strikes and the cracker lynchings and that dirt farmer in North Dakota who suddenly began to work miracles. (His patients didn’t stay cured, you remember, and he disappeared.)

The Big Ride. In between I grabbed at other things. One marriage, one divorce, and more and more bulges. Long bouts, between assignments. I didn’t give a – well, you can’t use that word in some papers. But it was all right. What did I expect, heaven?

The eyes aren’t quite as clear as they used to be. The skin under them is a little puffy. One chin begins to be not quite enough. But it’s still the Big Ride. With a splinter in the seat.

Dodging alimony payments, I skipped to Brazil, got in on a submarine exploration of the Amazon, wrote it up, sold it to AP as a feature. The first installment appeared on the same day as another little item – buried in the back – that said 85 and 87 had been made artificially.

Astatine and francium – the missing link in the periodic table – two billion years ago you could have picked up all the astatine and francium you wanted, just by reaching down and grabbing. If you’d been around at the time. Since then 85 and 87 have decayed into other elements. But Seaborg and Ghiorso at UC made them synthetically, with the big cyclotron and atomic oven transmutation, and the column on one side of that trivial item said SECOND BURN-DEATH VICTIM FOUND, and on the other there was a crossword puzzle.

I didn’t care, either.