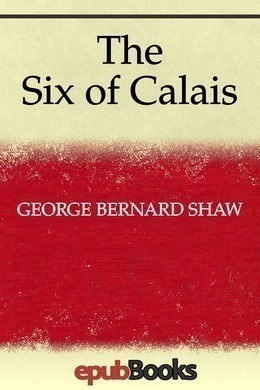 The Six of Calais

The Six of Calais is an acting piece and nothing else. As it happened, it was so well acted that in the eighteenth century all the talk would have been about Siddons as Philippa. But the company got no thanks except from the audience: the critics were prostrated with shock, damn their eyes! I have had to improve considerably on the story as told by that absurd old snob Froissart, who believed that “to rob and pill was a good life” if the robber was at least a baron. He made a very poor job of it in my opinion.

A.D. 4th August 1347. Before the walls of Calais on the last day of the siege. The pavilion of Edward III, King of England, is on your left as you face the walls. The pavilion of his consort Philippa of Hainault is on your right. Between them, near the King’s pavilion, is a two-seated chair of state for public audiences. Crowds of tents cover the background; but there is a clear way in the middle through the camp to the great gate of the city with its drawbridge still up and its flag still flying.

The Black Prince, aged 17, arrives impetuously past the Queen’s tent, a groom running after him.

THE PRINCE. Here is the King’s pavilion without a single attendant to announce me. What can the matter be?

A child’s scream is heard from the royal pavilion; and John of Gaunt, aged 7, dashes out and is making for his mother’s tent when the Prince seizes him.

THE PRINCE. How now, Johnny? Whats the matter?

JOHN [struggling] Let me go. Father is in a frightful wax.

THE PRINCE. I shall be in a wax myself presently. [Releasing him] Off with you to mother. [The child takes refuge in the Queen’s pavilion].

THE KING’S VOICE. Grrr! Yah! Why was I not told? Gogswoons, why was I not told? [Edward III, aged 35, dashes from his pavilion foaming]. Out! [The groom flies for his life]. How long have you been here? They never tell me anything. I might be a dog instead of a king.

THE PRINCE [about to kneel] Majesty–

THE KING [not waiting for the answer] The state of things here is past words. The wrath of God and all his saints is upon this expedition.

THE KING [raging on] May God wither and blast this accursed town! You would have thought that these dogs would have come out of their kennels and grovelled for mercy at my summons. Am I not their lawful king, ha?

THE PRINCE. Undoubtedly, sir. They–

THE KING. They have held me up for twelve months! A whole year!! My business ruined! My plans upset! My money exhausted! Death, disease, mutiny, a dog’s life here in the field winter and summer. The bitch’s bastard who is in command of their walls came to demand terms from me! to demand terms!!! looked me straight in the eyes with his head up as if I–I, his king! were dirt beneath his feet. By God, I will have that head: I will kick it to my dogs to eat. I will chop his insolent herald into four quarters–

THE PRINCE [shocked] Oh no, sir: not a herald: you cannot do that.

THE KING. They have driven me to such extremity that I am capable of cutting all the heralds in Christendom into their quarterings. [He sits down in his chair of state and suddenly becomes ridiculously sentimental]. I have not told you the worst. Your mother, the Queen, my Philippa, is here: here! Edward, in her delicate state of health. Even that did not move them. They want her to die: they are trying to murder her and our innocent unborn child. Think of that, boy: Oh, think of that [he almost weeps].

THE PRINCE. Softly, father: that is not their fault: it is yours.

THE KING. Would you make a jest of this? If it is not their fault it shall be their misfortune; for I will have every man, woman, and child torn to pieces with red hot pincers for it.

THE PRINCE. Truly, dear Sir, you have great cause to be annoyed; but in sober earnest how does the matter stand? They must be suffering the last extremity of famine. Their walls may hold out; but their stomachs cannot. Cannot you offer them some sort of terms to end the business? Money is running short. Time is running short. You only make them more desperate by threatening them. Remember: it is good policy to build a bridge of silver for a flying foe.

THE KING. Do I not know it? Have I not been kind, magnanimous? Have I not done all that Christian chivalry could require of me? And they abuse my kindness: it only encourages them: they despise me for it.