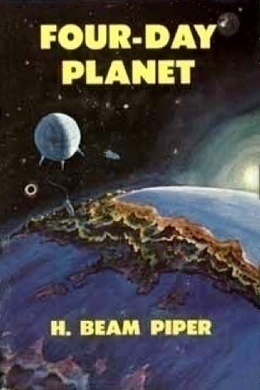 Four-Day Planet…where the killing heat of a thousand-hour day drives men underground, and the glorious hundred-hour sunset is followed by a thousand-hour night so cold that only an Extreme Environment Suit can preserve the life of anyone caught outside. Fenris isn’t a hell planet, but it’s nobody’s bargain. With 2,000-hour days and an 8,000-hour year, it alternates blazing heat with killing cold. A planet like that tends to breed a special kind of person: tough enough to stay alive and smart enough to make the best of it. When that kind of person discovers he’s being cheated of wealth he’s risked his life for, that kind of planet is ripe for revolution. This prescient tale will please fans of politically oriented science fiction.

I went through the gateway, towing my equipment in a contragravity hamper over my head. As usual, I was wondering what it would take, short of a revolution, to get the city of Port Sandor as clean and tidy and well lighted as the spaceport area. I knew Dad’s editorials and my sarcastic news stories wouldn’t do it. We’d been trying long enough.

The two girls in bikinis in front of me pushed on, still gabbling about the fight one of them had had with her boy friend, and I closed up behind the half dozen monster-hunters in long trousers, ankle boots and short boat-jackets, with big knives on their belts. They must have all been from the same crew, because they weren’t arguing about whose ship was fastest, had the toughest skipper, and made the most money. They were talking about the price of tallow-wax, and they seemed to have picked up a rumor that it was going to be cut another ten centisols a pound. I eavesdropped shamelessly, but it was the same rumor I’d picked up, myself, a little earlier.

“Hi, Walt,” somebody behind me called out. “Looking for some news that’s fit to print?”

I turned my head. It was a man of about thirty-five with curly brown hair and a wide grin. Adolf Lautier, the entertainment promoter. He and Dad each owned a share in the Port Sandor telecast station, and split their time between his music and drama-films and Dad’s newscasts.

“All the news is fit to print, and if it’s news the Times prints it,” I told him. “Think you’re going to get some good thrillers this time?”

He shrugged. I’d just asked that to make conversation; he never had any way of knowing what sort of films would come in. The ones the Peenemünde was bringing should be fairly new, because she was outbound from Terra. He’d go over what was aboard, and trade one for one for the old films he’d shown already.

“They tell me there’s a real Old-Terran-style Western been showing on Völund that ought to be coming our way this time,” he said. “It was filmed in South America, with real horses.”

That would go over big here. Almost everybody thought horses were as extinct as dinosaurs. I’ve seen so-called Westerns with the cowboys riding Freyan oukry. I mentioned that, and then added:

“They’ll think the old cattle towns like Dodge and Abilene were awful sissy places, though.”

“I suppose they were, compared to Port Sandor,” Lautier said. “Are you going aboard to interview the distinguished visitor?”

“Which one?” I asked. “Glenn Murell or Leo Belsher?”

Lautier called Leo Belsher something you won’t find in the dictionary but which nobody needs to look up. The hunters, ahead of us, heard him and laughed. They couldn’t possibly have agreed more. He was going to continue with the fascinating subject of Mr. Leo Belsher’s ancestry and personal characteristics, and then bit it off short. I followed his eyes, and saw old Professor Hartzenbosch, the principal of the school, approaching.

I assured him as to Dad’s health and inquired about his own, and then asked him how things were going at school. As well as could be expected, he told me, and I gathered that he kept his point of expectation safely low. Then he wanted to know if I were going aboard to interview Mr. Murell.

“Really, Walter, it is a wonderful thing that a famous author like Mr. Murell should come here to write a book about our planet,” he told me, very seriously, and added, as an afterthought: “Have you any idea where he intends staying while he is among us?”

“Why, yes,” I admitted. “After the Peenemünde radioed us their passenger list, Dad talked to him by screen, and invited him to stay with us. Mr. Murell accepted, at least until he can find quarters of his own.”

There are a lot of good poker players in Port Sandor, but Professor Jan Hartzenbosch is not one of them. The look of disappointment would have been comical if it hadn’t been so utterly pathetic. He’d been hoping to lasso Murell himself.

“I wonder if Mr. Murell could spare time to come to the school and speak to the students,” he said, after a moment.

“I’m sure he could. I’ll mention it to him, Professor,” I promised.

Professor Hartzenbosch bridled at that. The great author ought to be coming to his school out of respect for him, not because a seventeen-year-old cub reporter sent him. But then, Professor Hartzenbosch always took the attitude that he was conferring a favor on the Times when he had anything he wanted publicity on.