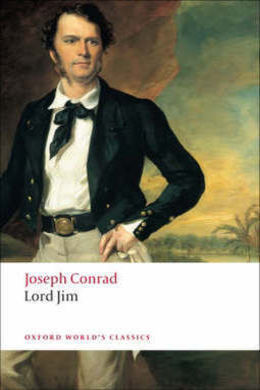 A hundred years ago a seaman’s life was full of danger, but Jim, the first mate on board the Patna, is not afraid of danger. He is young, strong, confident of his bravery. He dreams of great adventures - and the chance to show the world what a hero he is. But the sea is no place for dreamers. When the chance comes, on a calm moonlit night in the Indian Ocean, Jim fails the test, and his world falls to pieces around him. He disappears into the jungles of south-east Asia, searching for a way to prove himself, once and for all…

He was an inch, perhaps two, under six feet, powerfully built, and he advanced straight at you with a slight stoop of the shoulders, head forward, and a fixed from–under stare which made you think of a charging bull. His voice was deep, loud, and his manner displayed a kind of dogged self–assertion which had nothing aggressive in it. It seemed a necessity, and it was directed apparently as much at himself as at anybody else. He was spotlessly neat, apparelled in immaculate white from shoes to hat, and in the various Eastern ports where he got his living as ship–chandler’s water–clerk he was very popular.

A water–clerk need not pass an examination in anything under the sun, but he must have Ability in the abstract and demonstrate it practically. His work consists in racing under sail, steam, or oars against other water–clerks for any ship about to anchor, greeting her captain cheerily, forcing upon him a card—the business card of the ship–chandler—and on his first visit on shore piloting him firmly but without ostentation to a vast, cavern–like shop which is full of things that are eaten and drunk on board ship; where you can get everything to make her seaworthy and beautiful, from a set of chain–hooks for her cable to a book of gold–leaf for the carvings of her stern; and where her commander is received like a brother by a ship–chandler he has never seen before. There is a cool parlour, easy–chairs, bottles, cigars, writing implements, a copy of harbour regulations, and a warmth of welcome that melts the salt of a three months’ passage out of a seaman’s heart. The connection thus begun is kept up, as long as the ship remains in harbour, by the daily visits of the water–clerk. To the captain he is faithful like a friend and attentive like a son, with the patience of Job, the unselfish devotion of a woman, and the jollity of a boon companion. Later on the bill is sent in. It is a beautiful and humane occupation. Therefore good water–clerks are scarce. When a water–clerk who possesses Ability in the abstract has also the advantage of having been brought up to the sea, he is worth to his employer a lot of money and some humouring. Jim had always good wages and as much humouring as would have bought the fidelity of a fiend. Nevertheless, with black ingratitude he would throw up the job suddenly and depart. To his employers the reasons he gave were obviously inadequate. They said ‘Confounded fool!’ as soon as his back was turned. This was their criticism on his exquisite sensibility.

To the white men in the waterside business and to the captains of ships he was just Jim—nothing more. He had, of course, another name, but he was anxious that it should not be pronounced. His incognito, which had as many holes as a sieve, was not meant to hide a personality but a fact. When the fact broke through the incognito he would leave suddenly the seaport where he happened to be at the time and go to another—generally farther east. He kept to seaports because he was a seaman in exile from the sea, and had Ability in the abstract, which is good for no other work but that of a water–clerk. He retreated in good order towards the rising sun, and the fact followed him casually but inevitably. Thus in the course of years he was known successively in Bombay, in Calcutta, in Rangoon, in Penang, in Batavia—and in each of these halting–places was just Jim the water–clerk. Afterwards, when his keen perception of the Intolerable drove him away for good from seaports and white men, even into the virgin forest, the Malays of the jungle village, where he had elected to conceal his deplorable faculty, added a word to the monosyllable of his incognito. They called him Tuan Jim: as one might say—Lord Jim.