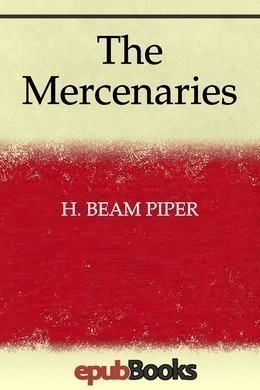 Once, wars were won by maneuvering hired fighting men; now wars are different—and the hired experts are different. But the human problems remain!

Duncan MacLeod hung up the suit he had taken off, and sealed his shirt, socks and underwear in a laundry envelope bearing his name and identity-number, tossing this into one of the wire baskets provided for the purpose. Then, naked except for the plastic identity disk around his neck, he went over to the desk, turned in his locker key, and passed into the big room beyond.

Four or five young men, probably soldiers on their way to town, were coming through from the other side. Like MacLeod, they wore only the plastic disks they had received in exchange for the metal ones they wore inside the reservation, and they were being searched by attendants who combed through their hair, probed into ears and nostrils, peered into mouths with tiny searchlights, and employed a variety of magnetic and electronic detectors.

To this search MacLeod submitted wearily. He had become quite a connoisseur of security measures in fifteen years’ research and development work for a dozen different nations, but the Tonto Basin Research Establishment of the Philadelphia Project exceeded anything he had seen before. There were gray-haired veterans of the old Manhattan Project here, men who had worked with Fermi at Chicago, or with Oppenheimer at Los Alamos, twenty years before, and they swore in amused exasperation when they thought of how the relatively mild regulations of those days had irked them. And yet, the very existence of the Manhattan Project had been kept a secret from all but those engaged in it, and its purpose from most of them. Today, in 1965, there might have been a few wandering tribesmen in Somaliland or the Kirghiz Steppes who had never heard of the Western Union’s Philadelphia Project, or of the Fourth Komintern’s Red Triumph Five-Year Plan, or of the Islamic Kaliphate’s Al-Borak Undertaking, or of the Ibero-American Confederation’s Cavor Project, but every literate person in the world knew that the four great power-blocs were racing desperately to launch the first spaceship to reach the Moon and build the Lunar fortress that would insure world supremacy.

He turned in the nonmagnetic identity disk at the desk on the other side of the search room, receiving the metal one he wore inside the reservation, and with it the key to his inside locker. He put on the clothes he had left behind when he had passed out, and filled his pockets with the miscellany of small articles he had not been allowed to carry off the reservation. He knotted the garish necktie affected by the civilian workers and in particular by members of the MacLeod Research Team to advertise their nonmilitary status, lit his pipe, and walked out into the open gallery beyond.

Karen Hilquist was waiting for him there, reclining in one of the metal chairs. She looked cool in the belted white coveralls, with the white turban bound around her yellow hair, and very beautiful, and when he saw her, his heart gave a little bump, like a geiger responding to an ionizing particle. It always did that, although they had been together for twelve years, and married for ten. Then she saw him and smiled, and he came over, fanning himself with his sun helmet, and dropped into a chair beside her.

“Did you call our center for a jeep?” he asked. When she nodded, he continued: “I thought you would, so I didn’t bother.”

For a while, they sat silent, looking with bored distaste at the swarm of steel-helmeted Army riflemen and tommy-gunners guarding the transfer platforms and the vehicles gate. A string of trucks had been passed under heavy guard into the clearance compound: they were now unloading supplies onto a platform, at the other side of which other trucks were backed waiting to receive the shipment. A hundred feet of bare concrete and fifty armed soldiers separated these from the men and trucks from the outside, preventing contact.

“And still they can’t stop leaks,” Karen said softly. “And we get blamed for it.”