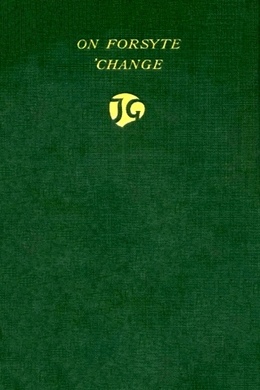 On Forsyte ‘Change deals in the main with the older Forsytes before the events chronicled in The Man of Property. Galsworthy states in a Foreword that “They have all been written since _Swan Song was finished but in place they come between the Saga and the Comedy…”. By way of explanation he says that “_It is hard to part suddenly and finally from those with whom one has lived so long; and these footnotes do really, I think, help to fill in and round out the chronicles of the Forsyte family”.

In the year 1821 ‘Superior Dosset’ Forsyte came to Town–if not precisely on a milk-white pony. According to the testimony of Aunt Ann, noted for precision, to young Jolyon on holiday from Eton, the migration from Bosport was in fact tribal and effected in two post- shays and the Highflyer coach.

“It was after our dear Mother’s death, and our father–that is your grandfather, Jo dear,–was very taciturn on the journey; he was never a man who showed his feelings. I had your Aunt Susan in arms, and your Uncle Timothy–two years old, such an interesting child, in the first post-shay with your grandfather. And your dear father, he was so dependable and very like you–he must have been fifteen then, just your age–he had your Aunts Juley and Hester with him and your Uncle Nicholas, who was four, in the second post- shay; and your Uncles James and Swithin and Roger were on the coach. I am afraid Swithin was very naughty with his pea-shooter on the journey. We started early in the morning, and we all went for the night to your Great-Uncle Edgar’s at Primrose Hill. I remember he still wore knee-breeches and a very large bunch of seals. Of course, WE were all in black. Your grandfather wore black for two years after our dear mother’s death; he felt it very much, though he never said anything.”

“Strongly-built, my dear, with a high colour. In those days they drank a great deal of wine, especially Madeira.”

“Not at first. A stonemason. You see, HIS father was a farmer, and he apprenticed your grandfather to a stonemason, so that he should learn all about building. I think it was a very wise decision, because in those days there were such opportunities for builders, so your grandfather soon made his way. He was becoming quite a warm man when we came to London.” And Aunt Ann’s shrewd eyes appraised her nephew.

He had risen, and was standing, slender in his first tailcoat, against the mantelpiece, looking downward at his boots. Elegant the dear boy looked, but a little embarrassed, as if his nerves had received a shock. Of course, he was at Eton among the nobility. And she said with decision:

“We should never be ashamed of our origin, dear Jo. The Forsytes are very good country stock, and have always been men of their word, and that is the great thing. And our dear mother was a lady in every respect. Her name was Pierce–a Devonshire family–and she was the daughter of a solicitor at Bosport who was very respected. He died bankrupt because his partner ran away with some funds, and all his fortune went to make up the loss. She had a sweet face and was most particular how we spoke and behaved. This is her miniature.”

Young Jolyon moved over and saw an oval face with fair hair parted in the middle and drawn in curves across the forehead, dark grey eyes looking up at him from rather deep beneath the brows, a chin with a delicate point, and shoulders shrouded in lace.

“Your grandfather was devoted to her in his way. For years after we first came to London he worked all day long, and at night I used to see him sitting up in his little study with his plans and his estimates–he couldn’t bear to go to bed. And then he took to horse exercise. It was such a mercy.”

Young Jolyon looked up. His brow had cleared, as if his grandfather had at last done something creditable.

“Of course, on the farm, when he was a boy, he used to ride. And when he took to it again, he went riding every day until his gout got too bad.”

“Yes, dear, gout was much more prevalent then than it is now. In some ways your grandfather was rather like your Uncle Swithin, only much shorter. He was fond of a horse, and quite a judge of wine.”

Young Jolyon caressed his waistcoat, as if smothering emotion at these marks of gentility, subtle enough to see that his Aunt was watching him for signs of snobbery.

“Where did you live, Auntie?”

“Well, at first, dear, we took a house on Primrose Hill close to your Great-Uncle Edgar. We lived there many years till we moved into a house of our own that your grandfather built, in St. John’s Wood; and there we lived till his death in 1850, when we came here, of course, with your Uncle Timothy.”

“What sort of houses did my grandfather build, Auntie?”

“I don’t know that I ever saw any, dear, except the one we lived in. But I believe they were always very good value. At first I think they were mostly out Fulham way, and some were at Brighton, but later they were in St. John’s Wood. That was then the coming part of London. He was not at all what is called a Jerry-builder. He had a funny nickname among his cronies–‘Superior Dosset’.”