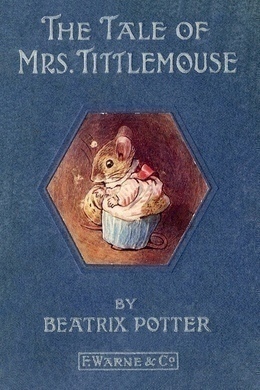 The Tale of Mrs. Tittlemouse

Mrs. tittlemouse was a most terribly tidy particular little mouse, always sweeping and dusting the soft sandy floors. Sometimes a beetle lost its way in the passages. “Shuh! shuh! little dirty feet!” said Mrs. Tittlemouse, clattering her dust-pan. The story of a little mouse’s funny house, the visitors she has there, and how she finally rids herself of the untidy, messy ones, particularly Mr. Jackson, a sloppy toad.

Once upon a time there was a wood-mouse, and her name was Mrs. Tittlemouse.

She lived in a bank under a hedge.

Such a funny house! There were yards and yards of sandy passages, leading to storerooms and nut-cellars and seed-cellars, all amongst the roots of the hedge.

There was a kitchen, a parlour, a pantry, and a larder.

Also, there was Mrs. Tittlemouse’s bedroom, where she slept in a little box bed!

Sometimes a beetle lost its way in the passages.

And one day a little old woman ran up and down in a red spotty cloak.

“Your house is on fire, Mother Ladybird! Fly away home to your children!”

Another day, a big fat spider came in to shelter from the rain.

“Beg pardon, is this not Miss Muffet’s?”

“Go away, you bold bad spider! Leaving ends of cobweb all over my nice clean house!”

She bundled the spider out at a window.

He let himself down the hedge with a long thin bit of string.

Mrs. Tittlemouse went on her way to a distant storeroom, to fetch cherry-stones and thistle-down seed for dinner.

All along the passage she sniffed, and looked at the floor.

“I smell a smell of honey; is it the cowslips outside, in the hedge? I am sure I can see the marks of little dirty feet.”

Mrs. Tittlemouse looked at her severely. She wished that she had a broom.

“Good-day, Babbitty Bumble; I should be glad to buy some beeswax. But what are you doing down here? Why do you always come in at a window, and say Zizz, Bizz, Bizzz?” Mrs. Tittlemouse began to get cross.

“Zizz, Wizz, Wizzz!” replied Babbitty Bumble in a peevish squeak. She sidled down a passage, and disappeared into a storeroom which had been used for acorns.

Mrs. Tittlemouse had eaten the acorns before Christmas; the storeroom ought to have been empty.

But it was full of untidy dry moss.

Mrs. Tittlemouse began to pull out the moss. Three or four other bees put their heads out, and buzzed fiercely.

“I am not in the habit of letting lodgings; this is an intrusion!” said Mrs. Tittlemouse. “I will have them turned out–” “Buzz! Buzz! Buzzz!”–“I wonder who would help me?” “Bizz, Wizz, Wizzz!”

–“I will not have Mr. Jackson; he never wipes his feet.”

Mrs. Tittlemouse decided to leave the bees till after dinner.

When she got back to the parlour, she heard some one coughing in a fat voice; and there sat Mr. Jackson himself!

He was sitting all over a small rocking-chair, twiddling his thumbs and smiling, with his feet on the fender.

He lived in a drain below the hedge, in a very dirty wet ditch.