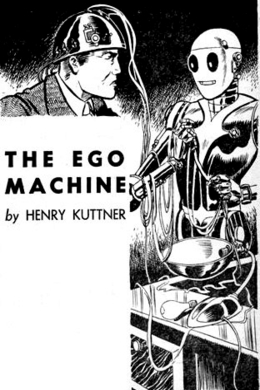 Celebrated playwright Nicholas Martin didn’t read the small print in his Hollywood options contract. Now he’s facing five years of servitude to a conceited director named Raoul St. Cyr, who’s taken a thoughtful play about Portuguese fishermen and added dancing mermaids. When it seems the plot has changed to include a robot from the future Nicholas looses all hope, but this robot may be just what he needs to win his freedom.

Nicholas Martin looked up at the robot across the desk.

“I’m not going to ask what you want,” he said, in a low, restrained voice. “I already know. Just go away and tell St. Cyr I approve. Tell him I think it’s wonderful, putting a robot in the picture. We’ve had everything else by now, except the Rockettes. But clearly a quiet little play about Christmas among the Portuguese fishermen on the Florida coast must have a robot. Only, why not six robots? Tell him I suggest a baker’s dozen. Go away.”

“Was your mother’s name Helena Glinska?” the robot asked.

“Ah, then she must have been the Great Hairy One,” the robot murmured.

Martin took his feet off the desk and sat up slowly.

“It’s quite all right,” the robot said hastily. “You’ve been chosen for an ecological experiment, that’s all. But it won’t hurt. Robots are perfectly normal life forms where I come from, so you needn’t–”

“Shut up,” Martin said. “Robot indeed, you–you bit-player! This time St. Cyr has gone too far.” He began to shake slightly all over, with some repressed but strong emotion. The intercom box on the desk caught his eye, and he stabbed a finger at one of the switches. “Get me Miss Ashby! Right away!”

“I’m so sorry,” the robot said apologetically. “Have I made a mistake? The threshold fluctuations in the neurons always upset my mnemonic norm when I temporalize. Isn’t this a crisis-point in your life?”

Martin breathed hard, which seemed to confirm the robot’s assumption.

“Exactly,” it said. “The ecological imbalance approaches a peak that may destroy the life-form, unless … mm-m. Now either you’re about to be stepped on by a mammoth, locked in an iron mask, assassinated by helots, or–is this Sanskrit I’m speaking?” He shook his gleaming head. “Perhaps I should have got off fifty years ago, but I thought–sorry. Good-bye,” he added hastily as Martin raised an angry glare.

Then the robot lifted a finger to each corner of his naturally rigid mouth, and moved his fingers horizontally in opposite directions, as though sketching an apologetic smile.

“No, don’t go away,” Martin said. “I want you right here, where the sight of you can refuel my rage in case it’s needed. I wish to God I could get mad and stay mad,” he added plaintively, gazing at the telephone.

“Are you sure your mother’s name wasn’t Helena Glinska?” the robot asked. It pinched thumb and forefinger together between its nominal brows, somehow giving the impression of a worried frown.

“You aren’t married yet, then? To Anastasia Zakharina-Koshkina?”

“Not yet or ever,” Martin replied succinctly. The telephone rang. He snatched it up.

Instantly the fires of rage went out of Martin’s eyes, to be replaced by a tender, rose-pink glow. For some years now he had given Erika, his very competent agent, ten percent of his take. He had also longed hopelessly to give her approximately a pound of flesh–the cardiac muscle, to put it in cold, unromantic terms. Martin did not; he put it in no terms at all, since whenever he tried to propose marriage to Erika he was taken with such fits of modesty that he could only babble o’ green fields.

“What a wonderful memory you have,” the robot put in mournfully. “Mine used to be, before I started temporalizing. But even radioactive neurons won’t stand–”

“Didn’t you get my message?” Erika demanded.

“Of course not,” Martin said, angrily. “I’ve suspected for some time that all my incoming calls have to be cleared by St. Cyr. Somebody might try to smuggle in a word of hope, or possibly a file.” His voice brightened. “Planning a jailbreak?”

“Not while he’s got DeeDee behind him,” Martin said gloomily. Summit Studios would sooner have made a film promoting atheism than offend their top box-office star, DeeDee Fleming. Even Tolliver Watt, who owned Summit lock, stock and barrel, spent wakeful nights because St. Cyr refused to let the lovely DeeDee sign a long-term contract.

“Nevertheless, Watt’s no fool,” Erika said. “I still think we could get him to give you a contract release if we could make him realize what a rotten investment you are. There isn’t much time, though.”

Martin moaned. “Then I’m doomed,” he said. “They’ll pick up my option automatically next week and I’ll never draw a free breath again. Erika, do something!”