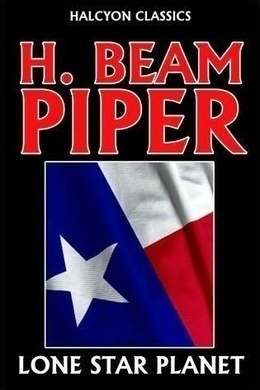 A Planet for Texans

When the whole ornery state of Texas took off for a new planet more to their liking, New Texas was the result: a rough-and-tumble world where everyone packs a gun and it’s legal to shoot politicians (if they deserve it)! But now these rugged and independent space pioneers are the targets of an expansive race of aliens. The Solar League ambassador to the Lone Star Planet has the unenviable task of convincing New Texans that a s’Srauff attack is imminent, and dangerous. Unfortunately it’s common knowledge that the s’Srauff are evolved from canine ancestors – and not a Texan alive is about to be scared of a talking dog! But unless he can get them to act, and fast, there won’t be a Texan alive, scared or otherwise!

They started giving me the business as soon as I came through the door into the Secretary’s outer office.

There was Ethel K’wang-Li, the Secretary’s receptionist, at her desk. There was Courtlant Staynes, the assistant secretary to the Undersecretary for Economic Penetration, and Norman Gazarin, from Protocol, and Toby Lawder, from Humanoid Peoples’ Affairs, and Raoul Chavier, and Hans Mannteufel, and Olga Reznik.

It was a wonder there weren’t more of them watching the condemned man’s march to the gibbet: the word that the Secretary had called me in must have gotten all over the Department since the offices had opened.

“Machiavelli, Junior.” Olga picked up the ball. “At least, that’s the way he signs it.”

“Take it easy, folks. These Hooligan Diplomats would as soon shoot you as look at you,” Mannteufel warned.

“Be sure and tell the Secretary that your friends all want important posts in the Galactic Empire.” Olga again.

“Well, I’m glad some of you could read it,” I fired back. “Maybe even a few of you understood what it was all about.”

“Don’t worry, Silk,” Gazarin told me. “Secretary Ghopal understands what it was all about. All too well, you’ll find.”

A buzzer sounded gently on Ethel K’wang-Li’s desk. She snatched up the handphone and whispered into it. A deathly silence filled the room while she listened, whispered some more, then hung it up.

They were all staring at me.

As I started across the room, Staynes began drumming on the top of the desk with his fingers, the slow reiterated rhythm to which a man marches to a military execution.

“A cigarette?” Lawder inquired tonelessly. “A glass of rum?”

There were three men in the Secretary of State’s private office. Ghopal Singh, the Secretary, dark-faced, gray-haired, slender and elegant, meeting me halfway to his desk. Another slender man, in black, with a silver-threaded, black neck-scarf: Rudolf Klüng, the Secretary of the Department of Aggression.

And a huge, gross-bodied man with a fat baby-face and opaque black eyes.

When I saw him, I really began to get frightened.

The fat man was Natalenko, the Security Coördinator.

“Good morning, Mister Silk,” Secretary Ghopal greeted me, his hand extended. “Gentlemen, Mr. Stephen Silk, about whom we were speaking. This way, Mr. Silk, if you please.”

There was a low coffee-table at the rear of the office, and four easy chairs around it. On the round brass table-top were cups and saucers, a coffee urn, cigarettes–and a copy of the current issue of the Galactic Statesmen’s Journal, open at an article entitled Probable Future Courses of Solar League Diplomacy, by somebody who had signed himself Machiavelli, Jr.

I was beginning to wish that the pseudonymous Machiavelli, Jr. had never been born, or, at least, had stayed on Theta Virgo IV and been a wineberry planter as his father had wanted him to be.

As I sat down and accepted a cup of coffee, I avoided looking at the periodical. They were probably going to hang it around my neck before they shoved me out of the airlock.

“Mr. Silk is, as you know, in our Consular Service,” Ghopal was saying to the others. “Back on Luna on rotation, doing something in Mr. Halvord’s section. He is the gentleman who did such a splendid job for us on Assha–Gamma Norma III.

“And, as he has just demonstrated,” he added, gesturing toward the Statesman’s Journal on the Benares-work table, “he is a student both of the diplomacy of the past and the implications of our present policies.”

“But judicious,” Natalenko squeaked, in the high eunuchoid voice that came so incongruously from his bulk. “He aired his singularly accurate predictions in a periodical that doesn’t have a circulation of more than a thousand copies outside his own department. And I don’t think the public’s semantic reactions to the terminology of imperialism is as bad as you imagine. They seem quite satisfied, now, with the change in the title of your department, from Defense to Aggression.”

“Well, we’ve gone into that, gentlemen,” Ghopal said. “If the article really makes trouble for us, we can always disavow it. There’s no censorship of the Journal. And Mr. Silk won’t be around to draw fire on us.”

Here it comes, I thought.

“That sounds pretty ominous, doesn’t it, Mr. Silk?” Natalenko tittered happily, like a ten-year-old who has just found a new beetle to pull the legs out of.

“It’s really not as bad as it sounds, Mr. Silk,” Ghopal hastened to reassure me. “We are going to have to banish you for a while, but I daresay that won’t be so bad. The social life here on Luna has probably begun to pall, anyhow. So we’re sending you to Capella IV.”