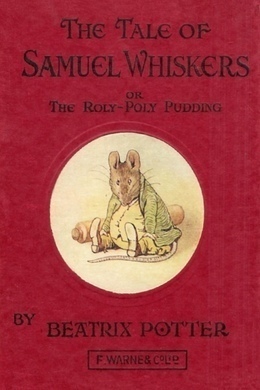 The Tale of Samuel Whiskers

The little Tom Kitten runs away from his mother up the chimney and, through a crack in the wall, he finds himself under the floor of the attic. Here he meets Mr. Samuel Whiskers and his wife Anna Maria, two rats, that capture him with the intention of eating him in a pudding. Tom’s siblings understand the plan and with the help of their mother and John Joiner, the carpenter, free Tom and scare off the couple of rats. Illustrated with Potter’s beautiful watercolors.

Once upon a time there was an old cat, called Mrs. Tabitha Twitchit, who was an anxious parent. She used to lose her kittens continually, and whenever they were lost they were always in mischief!

On baking day she determined to shut them up in a cupboard.

She caught Moppet and Mittens, but she could not find Tom.

Mrs. Tabitha went up and down all over the house, mewing for Tom Kitten. She looked in the pantry under the staircase, and she searched the best spare bedroom that was all covered up with dust sheets. She went right upstairs and looked into the attics, but she could not find him anywhere.

It was an old, old house, full of cupboards and passages. Some of the walls were four feet thick, and there used to be queer noises inside them, as if there might be a little secret staircase. Certainly there were odd little jagged doorways in the wainscot, and things disappeared at night–especially cheese and bacon.

While their mother was searching the house, Moppet and Mittens had got into mischief.

The cupboard door was not locked, so they pushed it open and came out.

They went straight to the dough which was set to rise in a pan before the fire.

They patted it with their little soft paws–“Shall we make dear little muffins?” said Mittens to Moppet.

But just at that moment somebody knocked at the front door, and Moppet jumped into the flour barrel in a fright.

Mittens ran away to the dairy, and hid in an empty jar on the stone shelf where the milk pans stand.

The visitor was a neighbour, Mrs. Ribby; she had called to borrow some yeast.

Mrs. Tabitha came downstairs mewing dreadfully–“Come in, Cousin Ribby, come in, and sit ye down! I’m in sad trouble, Cousin Ribby,” said Tabitha, shedding tears. “I’ve lost my dear son Thomas; I’m afraid the rats have got him.” She wiped her eyes with her apron.

“He’s a bad kitten, Cousin Tabitha; he made a cat’s cradle of my best bonnet last time I came to tea. Where have you looked for him?”

“All over the house! The rats are too many for me. What a thing it is to have an unruly family!” said Mrs. Tabitha Twitchit.

“I’m not afraid of rats; I will help you to find him; and whip him too! What is all that soot in the fender?”

“The chimney wants sweeping–Oh, dear me, Cousin Ribby–now Moppet and Mittens are gone!”

“They have both got out of the cupboard!”

Ribby and Tabitha set to work to search the house thoroughly again. They poked under the beds with Ribby’s umbrella, and they rummaged in cupboards. They even fetched a candle, and looked inside a clothes chest in one of the attics. They could not find anything, but once they heard a door bang and somebody scuttered downstairs.

“Yes, it is infested with rats,” said Tabitha tearfully. “I caught seven young ones out of one hole in the back kitchen, and we had them for dinner last Saturday. And once I saw the old father rat–an enormous old rat, Cousin Ribby. I was just going to jump upon him, when he showed his yellow teeth at me and whisked down the hole.”

“The rats get upon my nerves, Cousin Ribby,” said Tabitha.

Ribby and Tabitha searched and searched. They both heard a curious roly-poly noise under the attic floor. But there was nothing to be seen.

They returned to the kitchen. “Here’s one of your kittens at least,” said Ribby, dragging Moppet out of the flour barrel.

They shook the flour off her and set her down on the kitchen floor. She seemed to be in a terrible fright.

“Oh! Mother, Mother,” said Moppet, “there’s been an old woman rat in the kitchen, and she’s stolen some of the dough!”

The two cats ran to look at the dough pan. Sure enough there were marks of little scratching fingers, and a lump of dough was gone!

“Which way did she go, Moppet?”