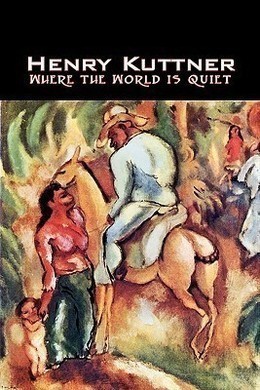 Where the World is Quiet

The life of an anthropologist is no doubt filled much of the time with the monotonous routine of carefully assembling powdery relics of ancient races and civilizations. But White’s lone Peruvian odyssey was most unusual. A story pseudonymously penned by one of the greats in the genre. Fra Rafael saw strange things, impossible things. Then there was the mystery of the seven young virginal girls of Huascan.

Fra Rafael drew the llama-wool blanket closer about his narrow shoulders, shivering in the cold wind that screamed down from Huascan. His face held great pain. I rose, walked to the door of the hut and peered through fog at the shadowy haunted lands that lifted toward the sky–the Cordilleras that make a rampart along Peru’s eastern border.

He made the sign of the cross on his breast. “It is the fog that brings the–the terror,” he said. “I tell you, Señor White, I have seen strange things these last few months–impossible things. You are a scientist. Though we are not of the same religion, you also know that there are powers not of this earth.”

I didn’t answer, so he went on: “Three months ago it began, after the earthquake. A native girl disappeared. She was seen going into the mountains, toward Huascan along the Pass, and she did not come back. I sent men out to find her. They went up the Pass, found the fog grew thicker and thicker until they were blind and could see nothing. Fear came to them and they fled back down the mountain. A week later another girl vanished. We found her footprints.”

“Si, and the same result. Now seven girls have gone, one after the other, all in the same way. And I, Señor White–” Fra Rafael’s pale, tired face was sad as he glanced down at the stumps of his legs–“I could not follow, as you see. Four years ago an avalanche crippled me. My bishop told me to return to Lima, but I prevailed on him to let me remain here for these natives are my people, Señor. They know and trust me. The loss of my legs has not altered that.”

I nodded. “I can see the difficulty now, though.”

“Exactly. I cannot go to Huascan and find out what has happened to the girls. The natives–well, I chose four of the strongest and bravest and asked them to take me up the Pass. I thought that I could overcome their superstitions. But I was not successful.”

“A few miles, not more than that. The fog grew thicker, until we were blinded by it, and the way was dangerous. I could not make the men go on.” Fra Rafael closed his eyes wearily. “They talked of old Inca gods and devils–Manco Capac and Oello Huaco, the Children of the Sun. They are very much afraid, Señor White. They huddle together like sheep and believe that an ancient god has returned and is taking them away one by one. And–one by one they are taken.”

“Only young girls,” I mused. “And no coercion is used, apparently. What’s up toward Huascan?”

“Nothing but wild llamas and the condors. And snow, cold, desolation. These are the Andes, my friend.”

“Okay,” I said. “It sounds interesting. As an anthropologist I owe it to the Foundation to investigate. Besides, I’m curious. Superficially, there is nothing very strange about the affair. Seven girls have disappeared in the unusually heavy fogs we’ve had ever since the earthquake. Nothing more.”

I smiled at him. “However, I think I’ll take a look around and see what’s so attractive about Huascan.”

“I shall pray for you,” he said. “Perhaps–well, Señor, for all the loss of my legs, I am not a weak man. I can stand much hardship. I can ride a burro.”

“I don’t doubt your willingness, Fra Rafael,” I said. “But it’s necessary to be practical. It’s dangerous and it’s cold up there. Your presence would only handicap me. Alone, I can go faster–remember, I don’t know how far I’ll have to travel.”

The priest sighed. “I suppose you are right. When–”

“They won’t go,” I said wryly. “They’ve been talking to your villagers. It doesn’t matter. I’ll go it alone.” I put out my hand, and Fra Rafael gripped it strongly.

I went out into the bright Peruvian sunlight. The Indios were standing in straggling knots, pretending not to watch me. My porters were nowhere in evidence. I grinned, yelled a sardonic goodbye, and started to lead the burro toward the Pass.

The fog vanished as the sun rose, but it still lay in the mountain canyons toward the west. A condor circled against the sky. In the thin, sharp air the sound of a distant rock-fall was distinctly audible.

White Huascan towered far away. A shadow fell on me as I entered the Pass. The burro plodded on, patient and obedient. I felt a little chill; the fog began to thicken.

Yes, the Indios had talked to me. I knew their language, their old religion. Bastard descendants of the Incas, they still preserved a deep-rooted belief in the ancient gods of their ancient race, who had fallen with Huayna Capac, the Great Inca, a year before Pizarro came raging into Peru. I knew the Quichua–the old tongue of the mother race–and so I learned more than I might have otherwise.