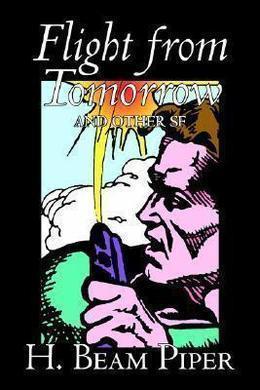 There was no stopping General Zarvas’ rebellion. Hunted and hated in two worlds, Hradzka dreamed of a monomaniac’s glory, stranded in the past with his knowledge of the future. But he didn’t know the past quite well enough…

But yesterday, a whole planet had shouted: Hail Hradzka! Hail the Leader! Today, they were screaming: Death to Hradzka! Kill the tyrant!

The Palace, where Hradzka, surrounded by his sycophants and guards, had lorded it over a solar system, was now an inferno. Those who had been too closely identified with the dictator’s rule to hope for forgiveness were fighting to the last, seeking only a quick death in combat; one by one, their isolated points of resistance were being wiped out. The corridors and chambers of the huge palace were thronged with rebels, loud with their shouts, and with the rasping hiss of heat-beams and the crash of blasters, reeking with the stench of scorched plastic and burned flesh, of hot metal and charred fabric. The living quarters were overrun; the mob smashed down walls and tore up floors in search of secret hiding-places. They found strange things–the space-ship that had been built under one of the domes, in readiness for flight to the still-loyal colonies on Mars or the Asteroid Belt, for instance–but Hradzka himself they could not find.

At last, the search reached the New Tower which reared its head five thousand feet above the palace, the highest thing in the city. They blasted down the huge steel doors, cut the power from the energy-screens. They landed from antigrav-cars on the upper levels. But except for barriers of metal and concrete and energy, they met with no opposition. Finally, they came to the spiral stairway which led up to the great metal sphere which capped the whole structure.

General Zarvas, the Army Commander who had placed himself at the head of the revolt, stood with his foot on the lowest step, his followers behind him. There was Prince Burvanny, the leader of the old nobility, and Ghorzesko Orhm, the merchant, and between them stood Tobbh, the chieftain of the mutinous slaves. There were clerks; laborers; poor but haughty nobles: and wealthy merchants who had long been forced to hide their riches from the dictator’s tax-gatherers, and soldiers, and spacemen.

“You’d better let some of us go first sir,” General Zarvas’ orderly, a blood-stained bandage about his head, his uniform in rags, suggested. “You don’t know what might be up there.”

The General shook his head. “I’ll go first.” Zarvas Pol was not the man to send subordinates into danger ahead of himself. “To tell the truth, I’m afraid we won’t find anything at all up there.”

“The ‘time-machine’,” Zarvas Pol replied. “If he’s managed to get it finished, the Great Mind only knows where he may be, now. Or when.”

He loosened the blaster in his holster and started up the long spiral. His followers spread out, below; sharp-shooters took position to cover his ascent. Prince Burvanny and Tobbh the Slave started to follow him. They hesitated as each motioned the other to precede him; then the nobleman followed the general, his blaster drawn, and the brawny slave behind him.

The door at the top was open, and Zarvas Pol stepped through but there was nothing in the great spherical room except a raised dais some fifty feet in diameter, its polished metal top strangely clean and empty. And a crumpled heap of burned cloth and charred flesh that had, not long ago, been a man. An old man with a white beard, and the seven-pointed star of the Learned Brothers on his breast, advanced to meet the armed intruders.

“So he is gone, Kradzy Zago?” Zarvas Pol said, holstering his weapon. “Gone in the ‘time-machine’, to hide in yesterday or tomorrow. And you let him go?”

The old one nodded. “He had a blaster, and I had none.” He indicated the body on the floor. “Zoldy Jarv had no blaster, either, but he tried to stop Hradzka. See, he squandered his life as a fool squanders his money, getting nothing for it. And a man’s life is not money, Zarvas Pol.”

“I do not blame you, Kradzy Zago,” General Zarvas said. “But now you must get to work, and build us another ‘time-machine’, so that we can hunt him down.”

“Does revenge mean so much to you, then?”

The soldier made an impatient gesture. “Revenge is for fools, like that pack of screaming beasts below. I do not kill for revenge; I kill because dead men do no harm.”

“Hradzka will do us no more harm,” the old scientist replied. “He is a thing of yesterday; of a time long past and half-lost in the mists of legend.”

“No matter. As long as he exists, at any point in space-time, Hradzka is still a threat. Revenge means much to Hradzka; he will return for it, when we least expect him.”

The old man shook his head. “No, Zarvas Pol, Hradzka will not return.”