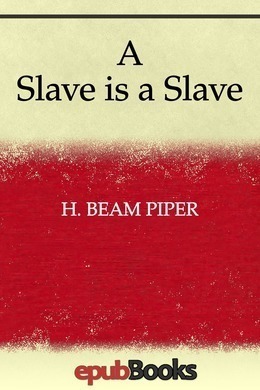 A Slave is a Slave

There has always been strong sympathy for the poor, meek, downtrodden slave–the kindly little man, oppressed by cruel and overbearing masters. Could it possibly have been misplaced…?

Jurgen, Prince Trevannion, accepted the coffee cup and lifted it to his lips, then lowered it. These Navy robots always poured coffee too hot; spacemen must have collapsium-lined throats. With the other hand, he punched a button on the robot’s keyboard and received a lighted cigarette; turning, he placed the cup on the command-desk in front of him and looked about. The tension was relaxing in Battle-Control, the purposeful pandemonium of the last three hours dying rapidly. Officers of both sexes, in red and blue and yellow and green coveralls, were rising from seats, leaving their stations, gathering in groups. Laughter, a trifle loud; he realized, suddenly, that they had been worried, and wondered if he should not have been a little so himself. No. There would have been nothing he could have done about anything, so worry would not have been useful. He lifted the cup again and sipped cautiously.

“That’s everything we can do now,” the man beside him said. “Now we just sit and wait for the next move.”

Like all the others, Line-Commodore Vann Shatrak wore shipboard battle-dress; his coveralls were black, splashed on breast and between shoulders with the gold insignia of his rank. His head was completely bald, and almost spherical; a beaklike nose carried down the curve of his brow, and the straight lines of mouth and chin chopped under it enhanced rather than spoiled the effect. He was getting coffee; he gulped it at once.

“It was very smart work, Commodore. I never saw a landing operation go so smoothly.”

“Too smooth,” Shatrak said. “I don’t trust it.” He looked suspiciously up at the row of viewscreens.

“It was absolutely unnecessary!”

That was young Obray, Count Erskyll, seated on the commodore’s left. He was a generation younger than Prince Trevannion, as Shatrak was a generation older; they were both smooth-faced. It was odd, how beards went in and out of fashion with alternate generations. He had been worried, too, during the landing, but for a different reason from the others. Now he was reacting with anger.

“I told you, from the first, that it was unnecessary. You see? They weren’t even able to defend themselves, let alone….”

His personal communication-screen buzzed; he set down the coffee and flicked the switch. It was Lanze Degbrend. On the books, Lanze was carried as Assistant to the Ministerial Secretary. In practice, Lanze was his chess-opponent, conversational foil, right hand, third eye and ear, and, sometimes, trigger-finger. Lanze was now wearing the combat coveralls of an officer of Navy Landing-Troops; he had a steel helmet with a transpex visor shoved up, and there was a carbine slung over his shoulder. He grinned and executed an exaggeratedly military salute. He chuckled.

“Well, look at you; aren’t you the perfect picture of correct diplomatic dress?”

“You know, sir, I’m afraid I am, for this planet,” Degbrend said. “Colonel Ravney insisted on it. He says the situation downstairs is still fluid, which I take to mean that everybody is shooting at everybody. He says he has the main telecast station, in the big building the locals call the Citadel.”

“Oh, good. Get our announcement out as quickly as you can. Number Five. You and Colonel Ravney can decide what interpolations are needed to fit the situation.”

“Number Five; the really tough one,” Degbrend considered. “I take it that by interpolations you do not mean dilutions?”

Lanze Degbrend grinned at him. Then he snapped down the visor of his helmet, unslung his carbine, and presented it. He was still standing at present arms when Trevannion blanked the screen.

“That still doesn’t excuse a wanton and unprovoked aggression!” Erskyll was telling Shatrak, his thin face flushed and his voice quivering with indignation. “We came here to help these people, not to murder them.”

“We didn’t come here to do either, Obray,” he said, turning to face the younger man. “We came here to annex their planet to the Galactic Empire, whether they wish it annexed or not. Commodore Shatrak used the quickest and most effective method of doing that. It would have done no good to attempt to parley with them from off-planet. You heard those telecasts of theirs.”

“Authoritarian,” Shatrak said, then mimicked pompously: “‘Everybody is commanded to remain calm; the Mastership is taking action. The Convocation of the Lords-Master is in special session; they will decide how to deal with the invaders. The administrators are directed to reassure the supervisors; the overseers will keep the workers at their tasks. Any person disobeying the orders of the Mastership will be dealt with most severely.’”